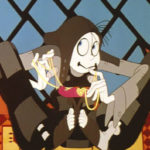 On Saturday, September 24th, animation historian John Canemaker sat down with animator Richard Williams to discuss the Museum of Modern Art’s new release of his classic film, The Thief and […]

Canemaker on Fantasia at MoMA, August 1

Posted by Tristian on Mar 23, 2013 in Feature Articles, Interviews | No Comments

On March 12th, “The Croods” screened at the Union Square Regal Cinemas. John Canemaker hosted a Q&A with directors Kirk De Micco & Chris Sanders.  It was a rather special […]