Posted by Tristian on Dec 24, 2014 in Feature Articles, International Update | No Comments

In this section of the Etiuda&Anima International Film Festival Journals, we cover the winners of the animation competition, recommendations for Americans, and a discussion of the infamous Polish animation Hipopotamy.


To read more information about the what it’s like to watch 7 days of animation in Krakow, click here!  And check out a photo album of the trip!

The Winners of the Anima Competition:

The Anima Jury is composed of: Gil Alkabetz, Chairman of the Jury, and the Members of the Jury: Ivan Bogdanov, Marcin Giżycki, Regina Pessoa, and Grzegorz Sztwiertnia

[ASIFA editor’s note: “justifications” as written on the E&A website]

The Golden Jabberwocky and PLN 12,000 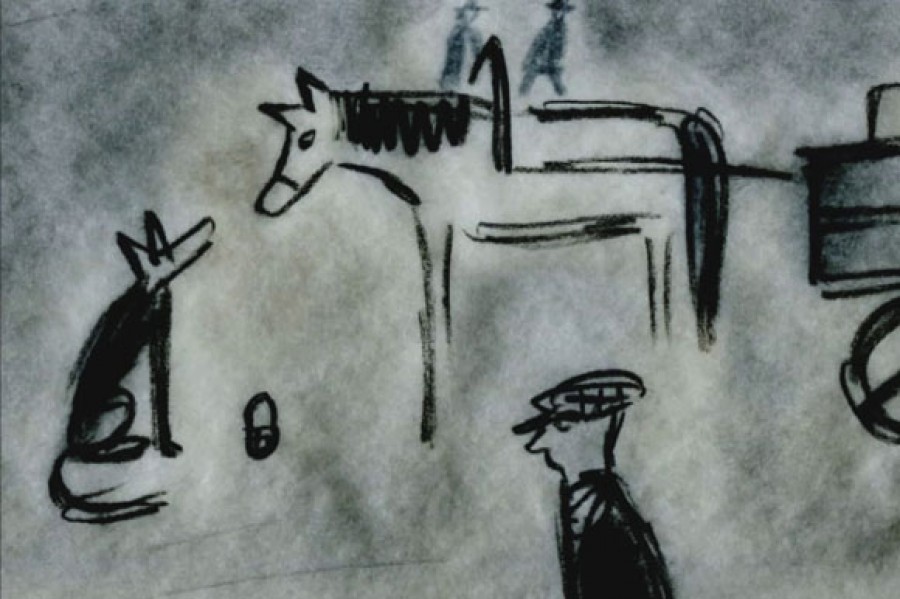 “Justification: For the adequate use of the graphic means in an important and moving story.”

[Ed. note: Charcoal on dirty paper.  The story of one loyal dog living in the Prague Ghetto under Nazi rule. simplistic cartoony style and droll narrator] 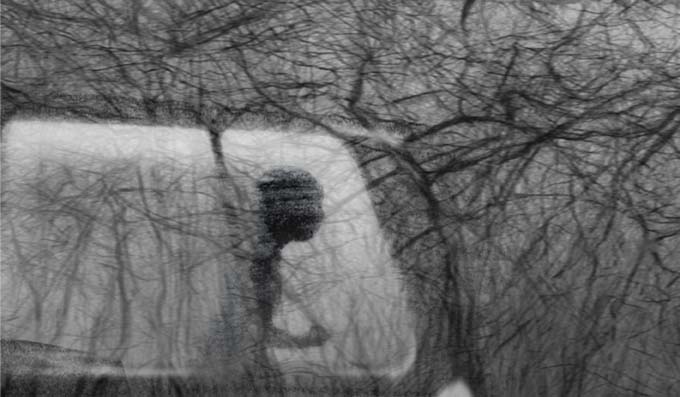 “Justification: For subtle yet convincing use of images combined with a powerful soundtrack.”

[Ed. note: a long exploration of the forest the weather, shot on 35 mm film in shades of grey and green, not for the easily bored] 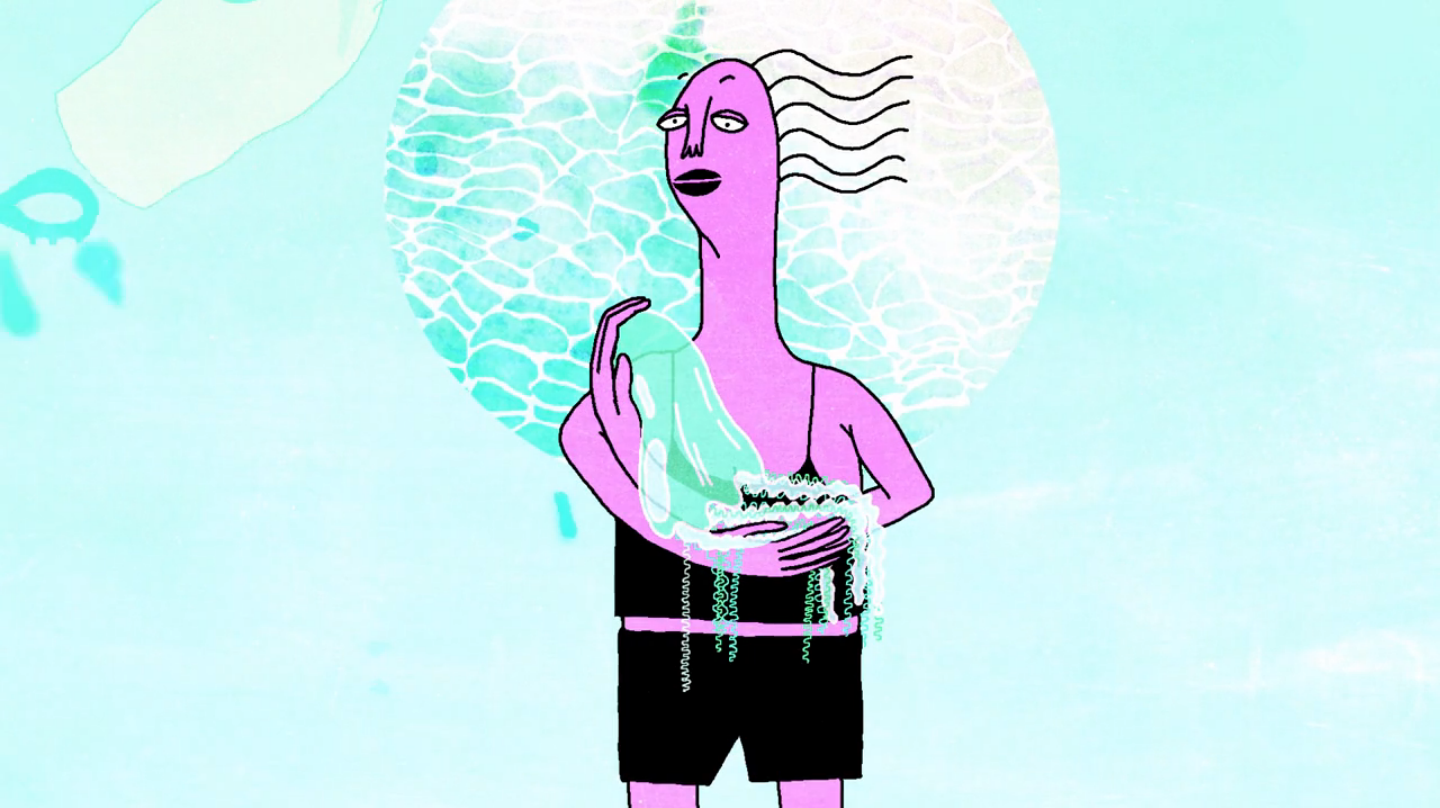 “Justification: For its highly original and inventive way of approaching the human condition.”

[Ed. note: A neon pop rumination on the ennui of youth.  One man sits on the beach with his more-than-human friends and comes to grip with his past.  Flat bright colors, thin black lines on collaged watercolor and gradient patterns.] 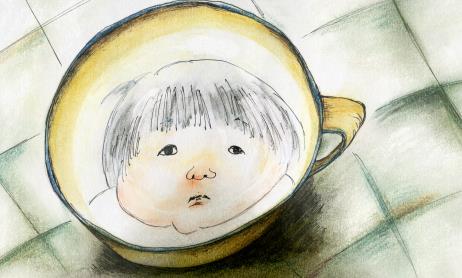 Justification: For its mature use of the film language in describing a personal experience.

[Ed. note: a unique children’s style of drawing, and their perspective of growing up with a single parent, emotions revealed when necessary].

[Ed. note: we got a comment from the filmmaker!  “I made “1000 Plateaus” over a space of 10 years while I sat in a car AT work. I painted each film cell by hand using a nob pen and coloured ink.” ~ Steven Woloshen.  It is set to jazz music.]

Justification: The film touches upon an important and difficult subject of shaping human identity in a remarkable way. We were full of appreciation for its poetic mood, as well as the subtle, delicate visual layer. 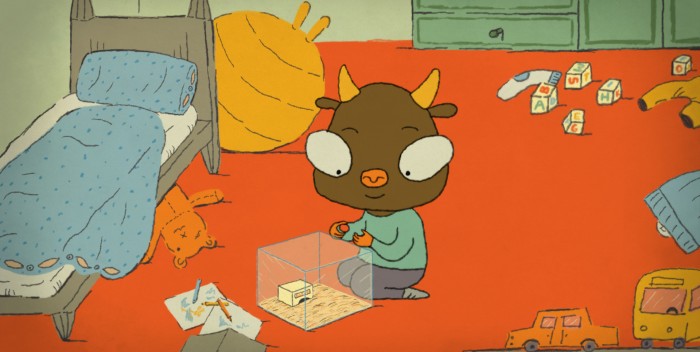 Moreover, the Jury decided to award 5 Honourable Mentions to the following films:

[Ed. note: one of my favorites from last year, a dynamic ink drop/blot animation set to classical music] 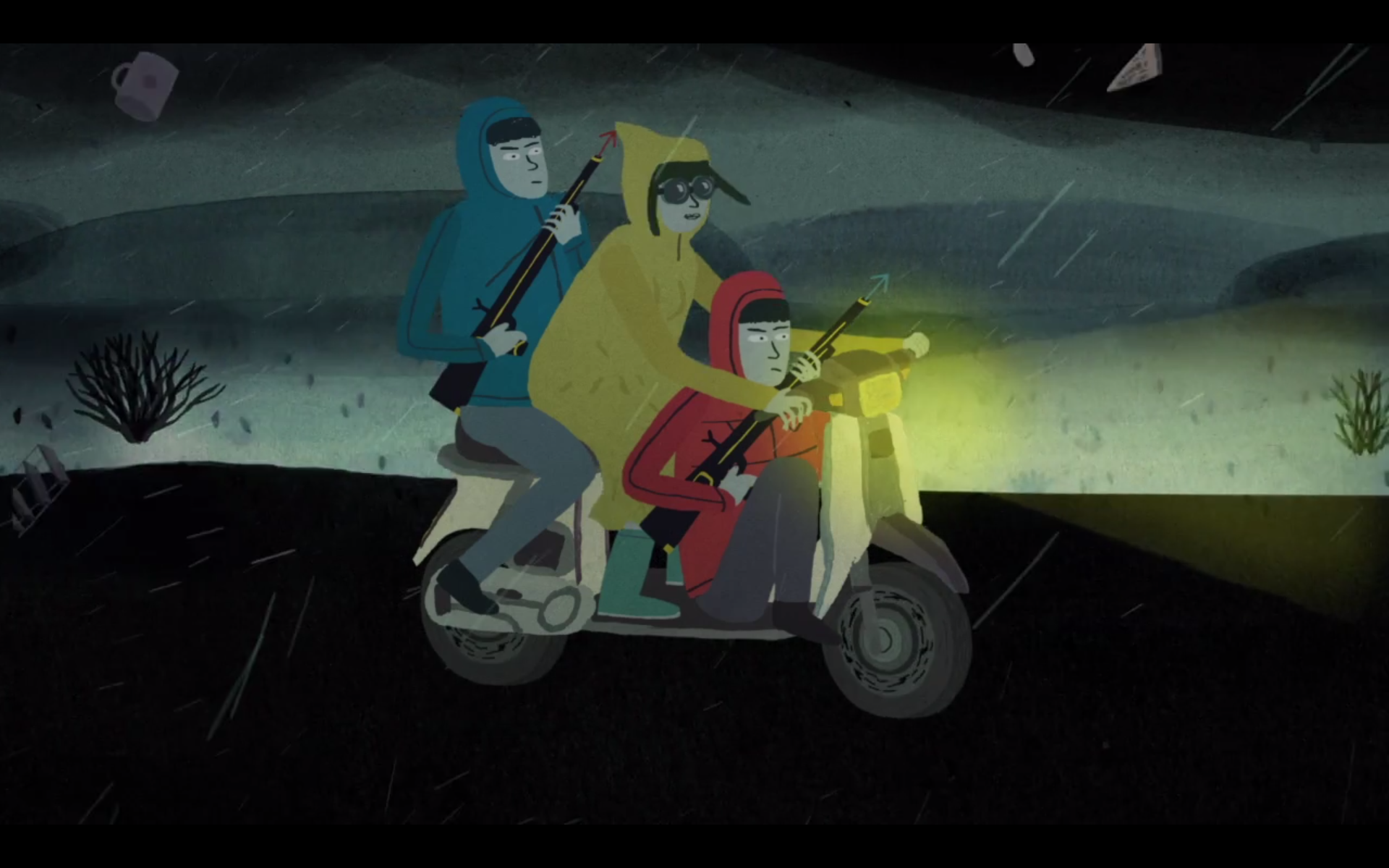 [Ed. note: a great absurdist drama in pastel colors, two scientists grapple with a myterious girl and supernatural forces over their latest invention].

[Ed. note: a stop motion film in which the upper half of the characters are painted on the walls, an intense look at 2 brothers geriatric care for their mother.]

[Ed. note: Classic Western shoot-em-up, made entirely out of yarn strung through pins on a wall.]

and Honourable Mention for: 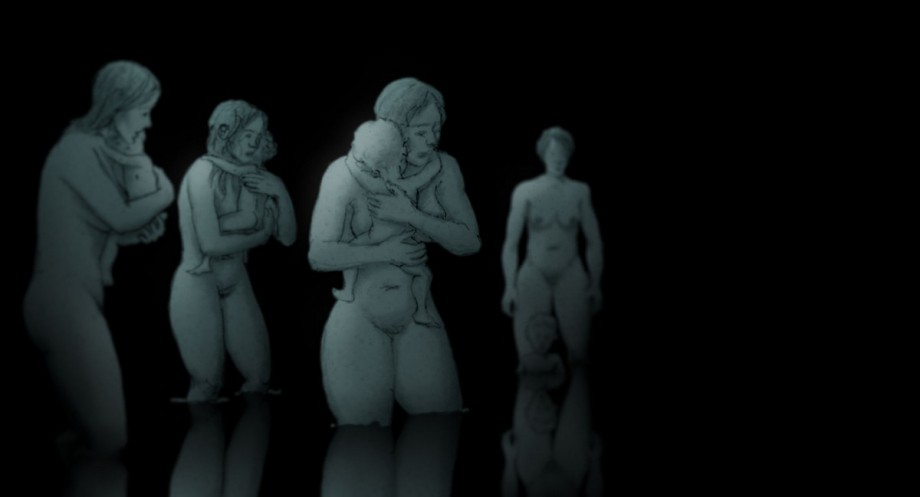 In the blackest of pools, a group of women and children bathe; their minds are of hippopotami, but their bodies are human.  An equal number of men approach; one makes advances and is rejected by the lead female.  It quickly ends in his death.  As a response, the rest of the men advance, and eliminate the competitor’s offspring so they can continue their own genetic line.  A scene inspired by a documentary, but transposed on to a human drama.

After every shorts screening, attending filmmakers came up for a Q&A.  It was a great chance to hear more from Piotr Dumała himself, having not attended his Self Portrait lecture.  His following opinions are clear.  Defining art is risky because we talk about various concepts.  If you are hungry, you eat something.  If you are willing to make a film, you do; if you are not, you don’t.  Piotr would actually prefer to write films than make them.  Animation is an autonomous branch of art; the medium is just a tool to tell the story.

Hippos title may seem simple but it needs introduction.  Still, he would not change it to anything else.  It is always great (to Piotr) to get a strong reaction, even if one juror from a festival swore to never give it an award, or if one woman stormed out of his Self Portrait talk.  He does not really know his own attitude towards Hippos.  There are references to two cosmologies: the Greek and the Bible.  In common they share violence, battles, and struggle.  It is a rebellion against God/gods.  The film is close to his heart, and he does not want a simple transfer of an animal documentary to humans.  There is a transformation into allegory.

Sometimes the idea becomes predominant over the artwork itself.  When submitting a proposal to the Polish Film Institute submitting, people convinced him to make a film about “what if humans acted like animals without society.” In the end, the proposal received the highest score of all submitted films.

The “disgusting” nature of the subject did make parts of the production insufferable, so he tried to soften it with artistic reflections and ‘balletic’ repetitions.  These techniques, and multiplication of the figures, added a more intriguing dimension. The black background is art, to be interpreted as you wish.  It is a space; the origin is simple, you get rid of what is unnecessary (eg: the title) and you have emptiness and reflection.  There is no time of day or weather.  It is not necessary.

The appearance of the dog walking by, and pausing to watch and drink water, is just someone else’s eyes, an observer.  We watch on YouTube videos of animals eating animals and we feel that this is their life, their work, their problem.  The dog is a dog or it is us; it is just indifferent.  The parallel worlds of the hippos and the dog coexist.  Piotr spoke of Susan Sontag’s Regarding the Pain of Others: the violence forces you to think about humanity.  Why do images like Hussein’s hanging get so many views, why do we slow down to see a car accident.  Perhaps there is fun in bull-fighting.  [On some level] we like these things, we are drawn to them.  Again, the dog’s appearance references these ideas.  Art is not for encouragement of these actions but it is a mirror for people to look at.  Art is for people to reinterpret their behavior.

Sontag analyzes images of Goya and American Civil War photography.  She says that art needs to show disgusting things; if it is only pleasing then it is just pornography.  Piotr intended to add some pornographic poses in the end of Hippos but he decided that would have made it too vulgar.  Some may say that you need to put beautiful people in porn, but he disagrees, they do not have to be pretty.  But Piotr did model his figures’ bodies on Michelangelo’s ideas of beauty.  In fact there is an interesting connection between violence and beauty.  The “advertising youth cult coexists with violence images (on the news).  While watching a documentary on the Falklands War, he noticed a disparity between the military actions of soldiers, and their behavior back home.  Hipopotamy is a continuum of human possibilities, from beauty to murder.

The Best of the Rest: Tristian Goik’s recommendations

Generally I didn’t understand why certain films won over others, when there were very many technical feats of animations throughout the festival.  The “justifications” help me understand the European point of view when it comes to raison d’etres, but here are some shorts I’d like the Americans to see. 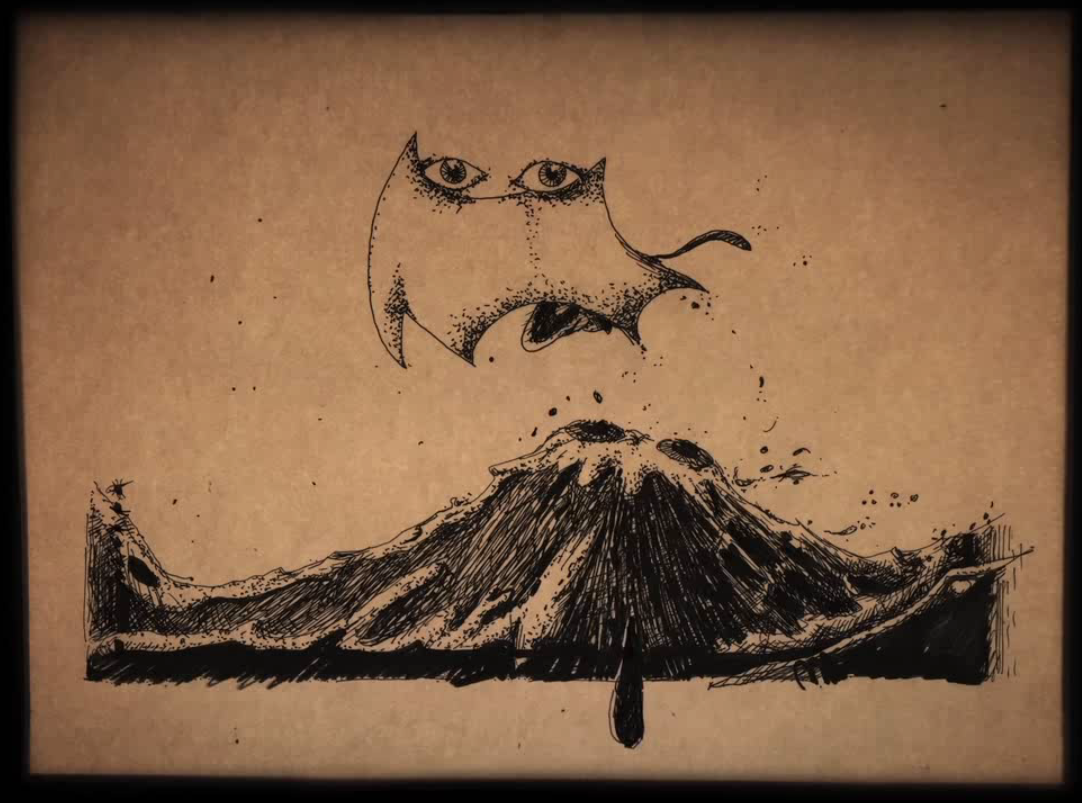 Surreal.  Black gritty pen on brown paper, the characters are composites of body parts, animals, and machines.  Creatures explore their world, unveiling their interior structures grotesquely through forceful interactions with other random objects, constantly transforming but never ceasing to exist.  Genesis based on careful animation of a glass falling. 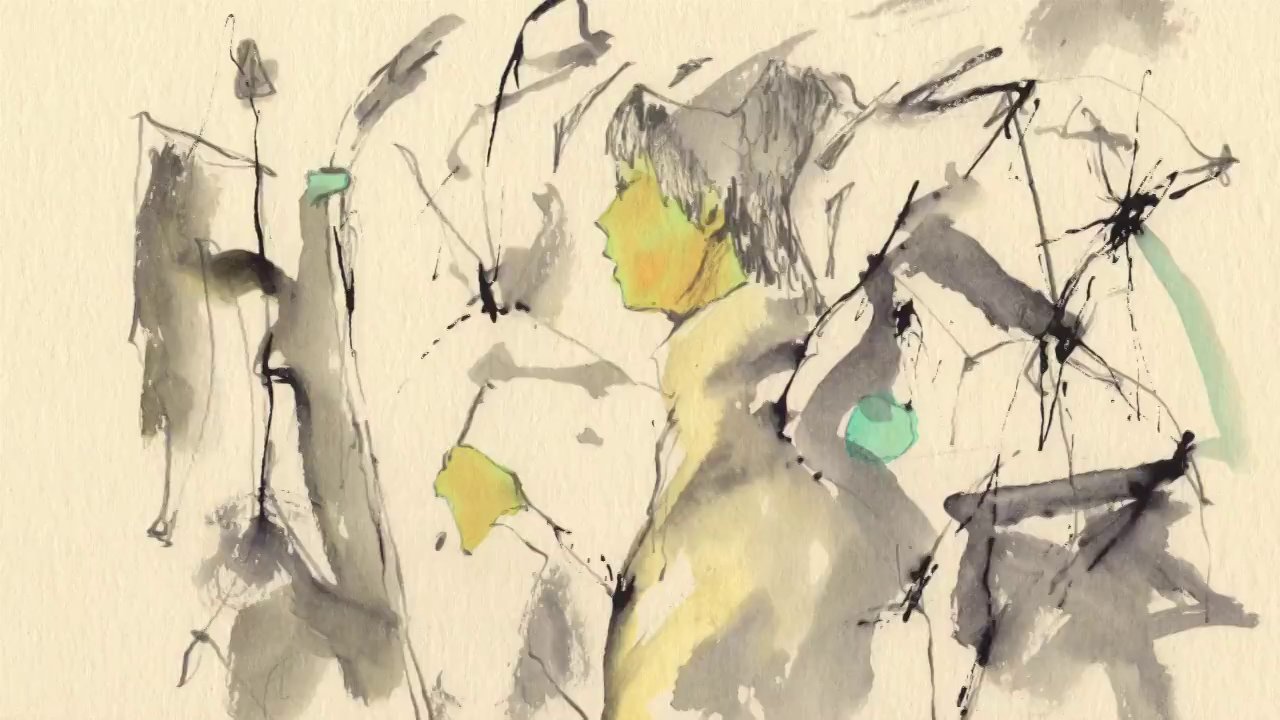 Eight seconds of a bored young man drinking tea, and variations.  He is not bored so much as he is lucidly dreaming.  Shapes, colors, movements, entities start to spill out of the spaces in the timing of the endless loop of coffee sipping.  Pencil and paint on paper, a simple act becomes creatively complicated and illustrious. 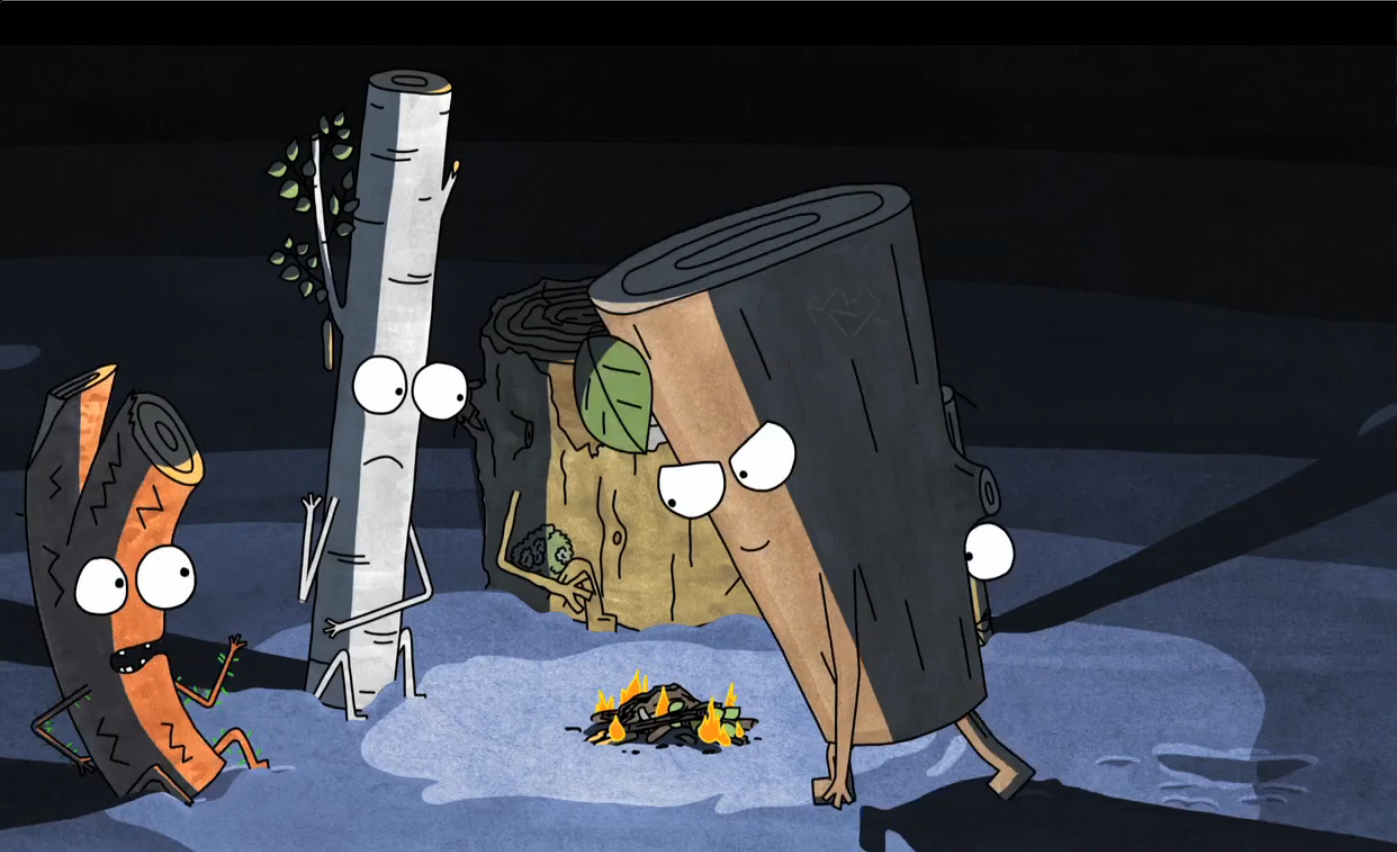 In a snowy landscape of a recently cleared forest, several logs come together to stay warm.  When the eldest starts a small campfire, things quickly spiral out of control as the cold drives them to the depths of madness and depravity.  Computer lines filled with rich watercolors, the logs are cartoony with big white bubble eyes and simple features, that still make them unique. 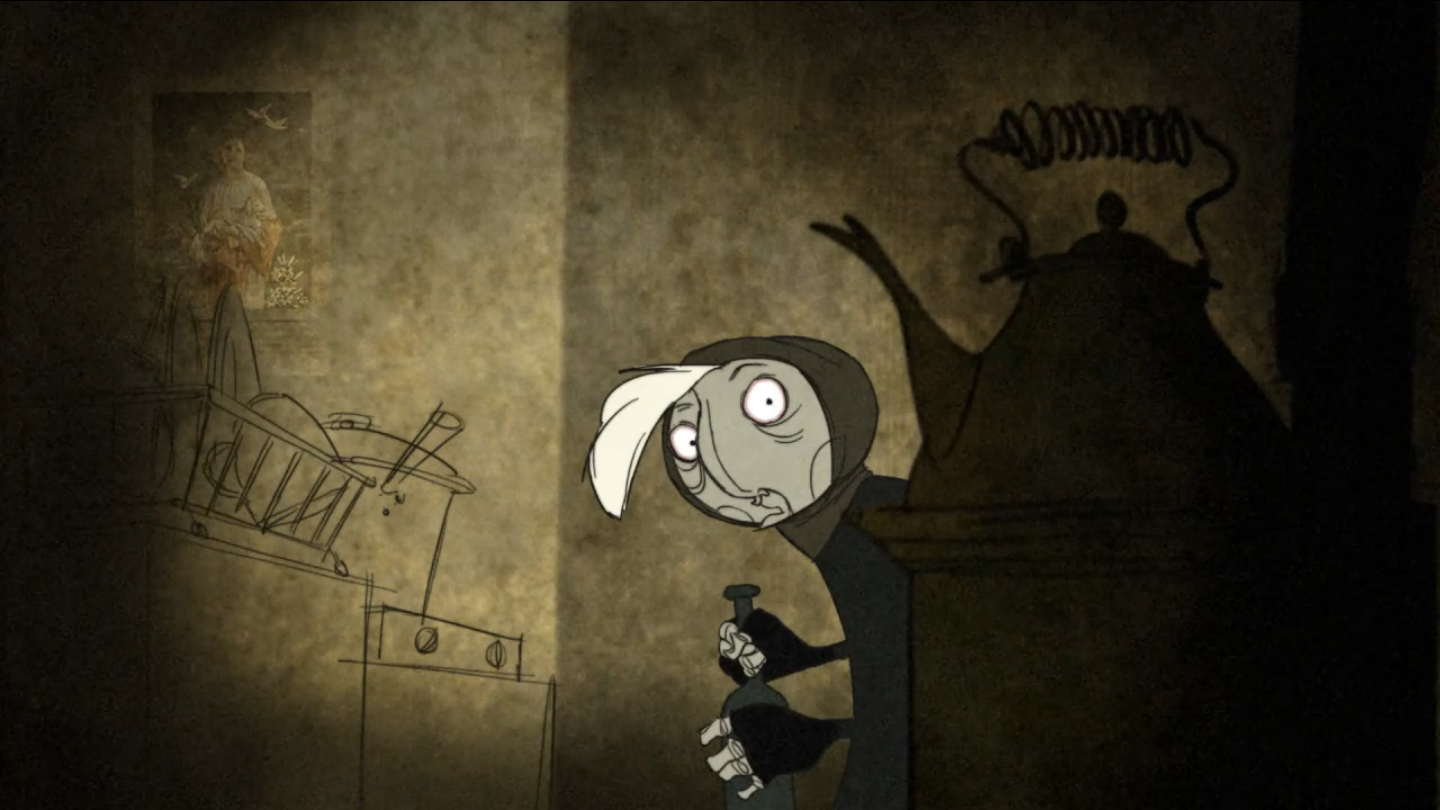 A posh snobby narrator outlines the process of making gruel, and the difficulties you might face in what turns out to be a slightly fascist, possibly communist, and definitely poor country.  An old woman perseveres in her daily chore, silently and stoically, finding entertainment where she can.  Dull smoky colors in TV Paint, with thin lines and grime. 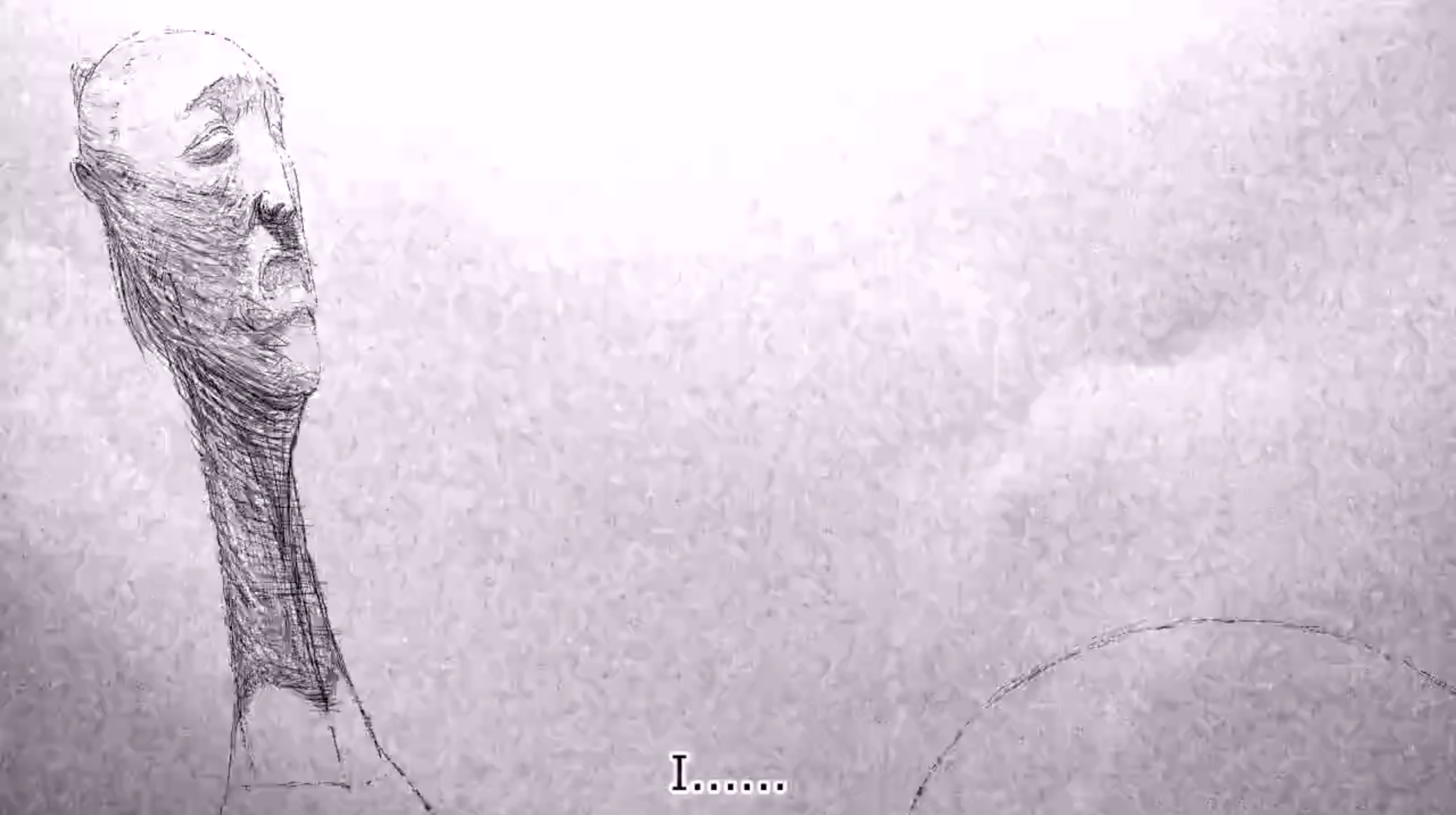 One man, one ice cream.  As a Chinese language film, it is even more confusing, but all this guy wants to do is lick his ice cream cone.  Unfortunately, his pose and face contort along with his stammer, as he forces himself to announce what he is doing before the reward.  Black scratches on Xerox-like paper, the editing is staccato.  Even better (especially in the theatre) was the addition of Sound FX like people coughing, sighing, and walking away. 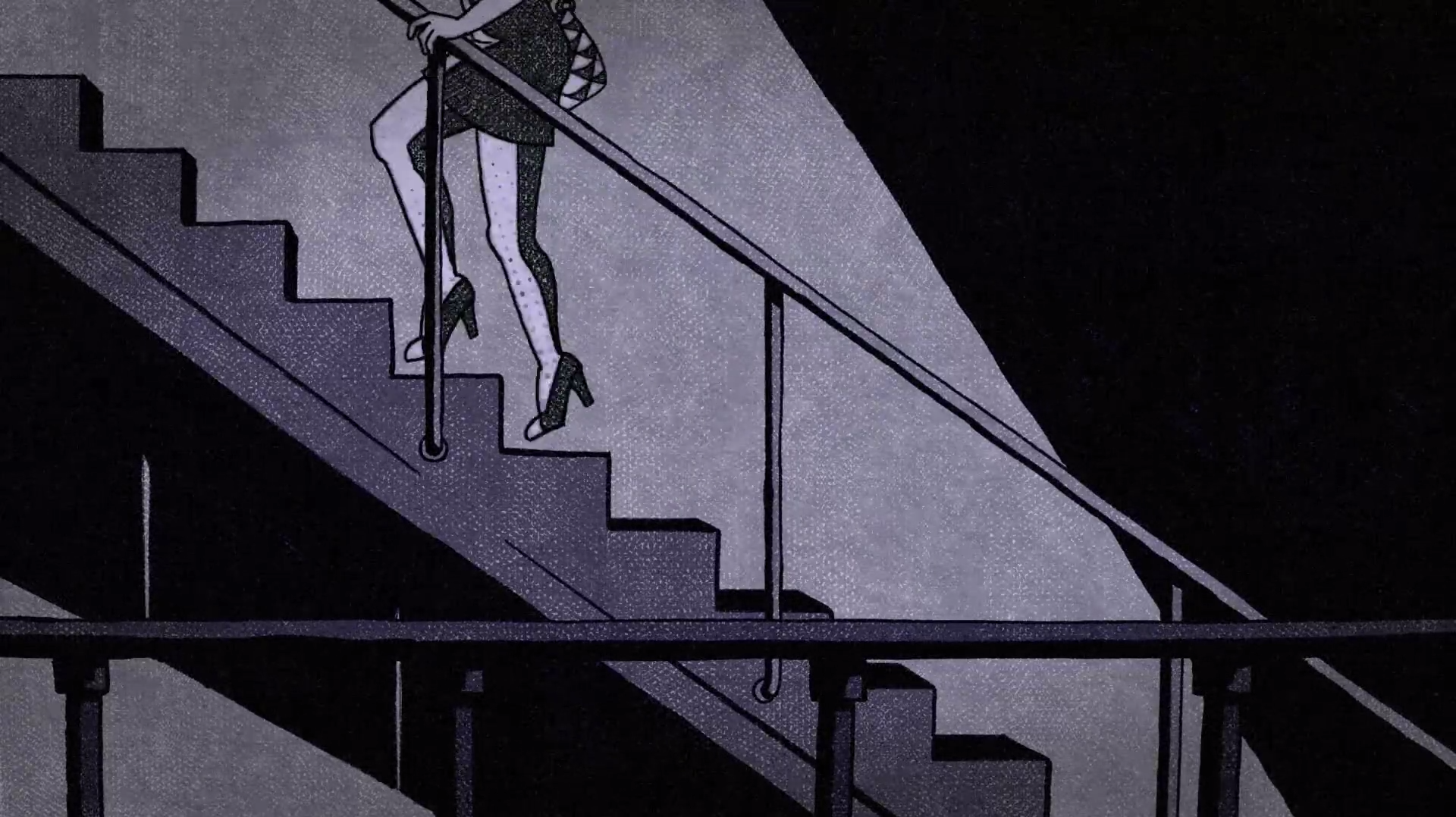 A suspenseful noir that soon takes a turn for doom and incredulity.  As we are drawn into the intrigue of a deep sea diver and a femme fatale, rendered in classic comic book style complete with halftone dots, we are slowly drowned by the grip of mysterious starfish.  Monochromatic and roughly geometric, the action only becomes more dramatic. 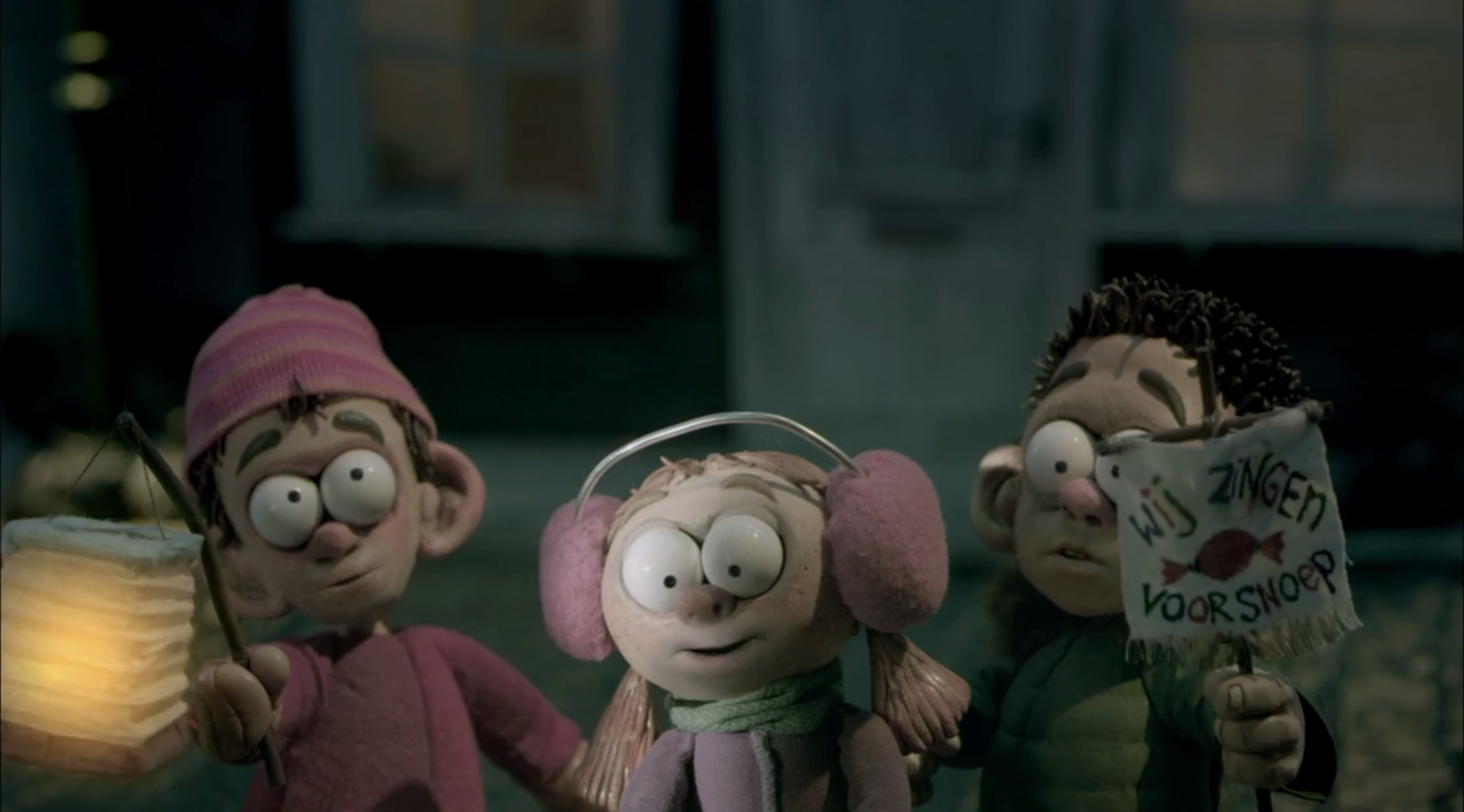 In a rocky town by the sea, three kids go trick or treating to see how much candy they can actually get.  Mean while, as a storm brews, a man orders some French fries from a truck.  A spooky but silly stop motion short that is also reminiscent of Muppets, things quickly escalate.  A Halloween morality tale. 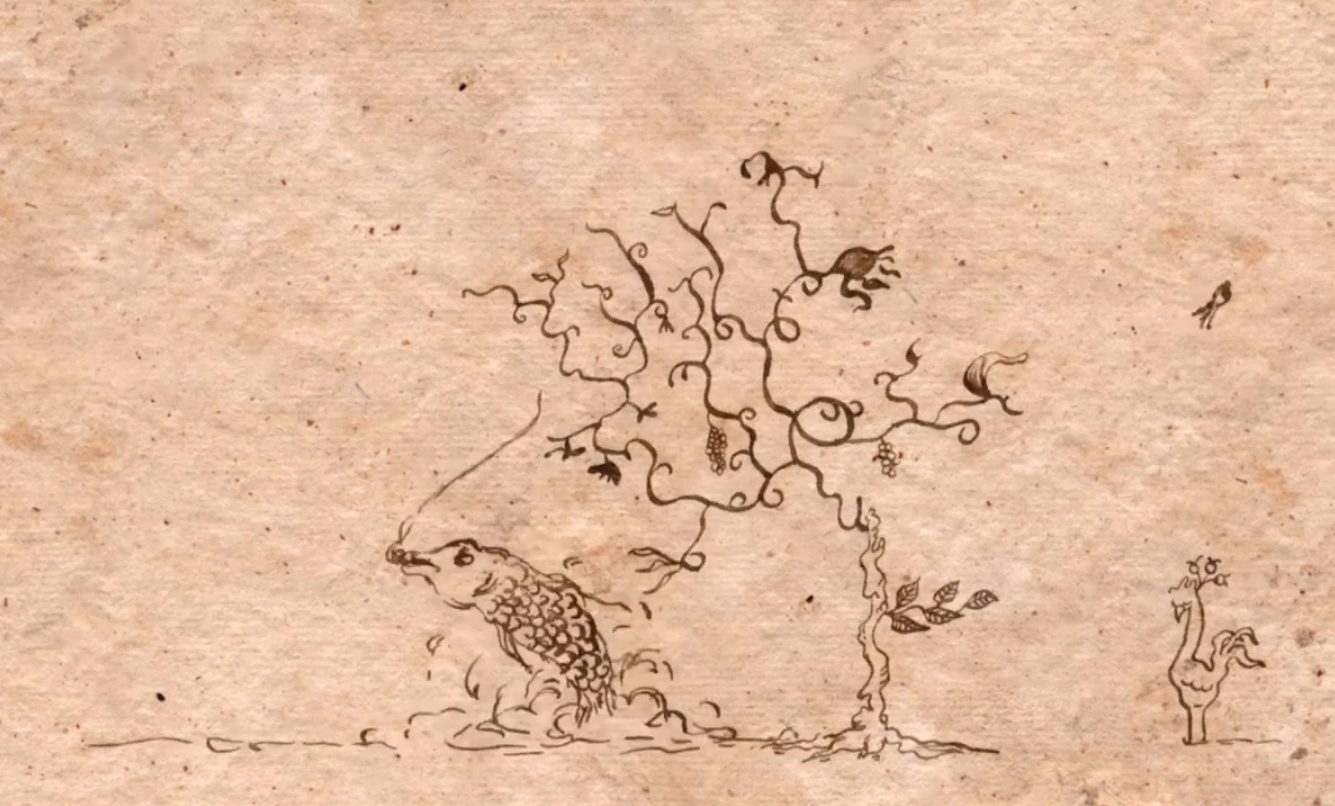 A delicately crafted stream of consciousness animation, replicating the doodles or illustrations one might see in illuminated manuscripts, just dried brown ink on a still piece of parchment.  The earth’s creatures come to life out of lines or plants and transform into other forms, even humans, as a history or style of French life comes into play.  Choral music and a declarative French narrator. 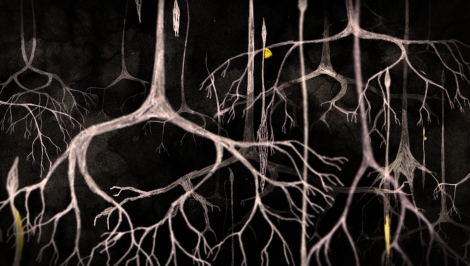 Opening scene: a brutally honest depiction of plant life that arrests the viewer. Two beings, one black and one white, sit and let their inner beings grow towards each other, until they reach some sort of equilibrium.  A soundtrack of sounds all from natural objects.  Water colour and pencil, black white and brown with yellow highlights.

Fey fragments of a shadow world reeking of desperation.  This stop motion is based on the writings of Felisberto Hernández, and describes a man’s visit to a strange widow’s villa, and the mystery within.  Draped in darkness and crushed tulle, you might not want these forms exposed to harsh light.  Haunting.