Posted by Tristian on Mar 23, 2017 in Uncategorized | No Comments

On March 11th 2017, in the chilly Scandinavia House (The Nordic Center In America), the NY International Children’s Film Festival held their first “Animators All Around.” Hosted by festival friend Nic Marshall (of the New Zealand Int’l Film Fest) the panel included directors Mark Osborne (The Little Prince), Elizabeth Ito (2017 short in competition Welcome to My Life), and Rawan Rahim (2016 Festival short Lilou). After a fun morning of volunteer work scanning tickets for the NYICFF’s earlier screenings, I listened to the panel “share excerpts of their films, discuss their inspiration, and demonstrate how they create their dynamic work through sketches, storyboards, and stop-motion models.” 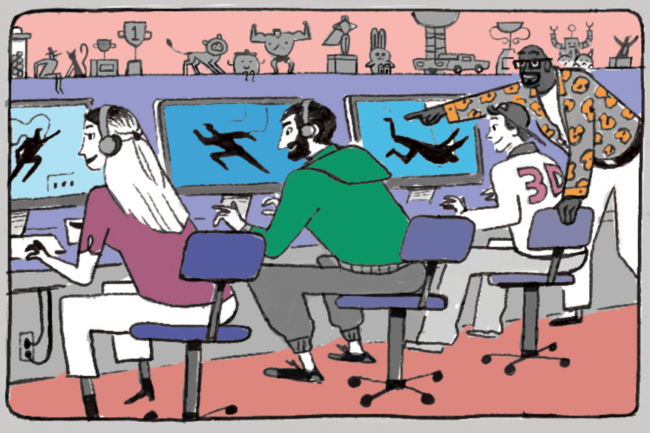 Rawan Rahim’s favorite color is “Beirut Blue” and her favorite movie is The Last Unicorn (yay!!!). Her film Lilou is a fantastical and heart-wrenching tale of a little girl who is challenged to face her fears of other people and learns the power of empathy.  Rawan has been a doodling day dreamer ever since high school, and even dropped out of studying animation at School of the Visual Arts. She decided to concentrate on illustration instead. “Everything around me was so messy and tragic,” Rawan told us, “is this what growing up is?  I don’t like it!” Rawan has been haunted by an imaginary little girl named Lilou her whole life, whom she repeatedly drew in her notes, even on her walls and light-switches. It won’t shock you to see visual similarities between Rawan and Lilou, right down to the comfy sweaters. 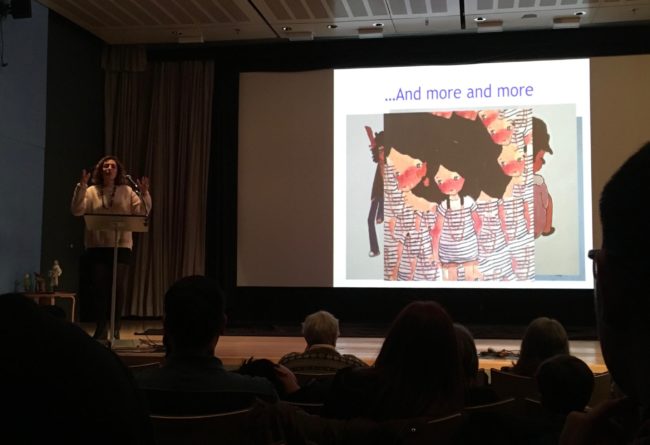 Rawan first created a blog for Lilou, featuring illustrations paired with little stories that were initially geared towards adults.  She held many conversations with herself to retain her childhood, masking heavy emotions with humor, in what she calls “bittersweet lightness.” Rawan envisioned Lilou as the perfect storybook, and went out to claim a publisher. ‘But no, fail,’ she quickly found out and changed her vision.  She looked at her drawings of Lilou and wanted to know more about her and what she was doing, in a way that only animation can tell you.  She assembled a team of animators from Paris, and dove right in, learning how to assign roles to people’s strong suits.

When Rawan first saw Lilou’s animation tests, she exclaimed, ‘that’s not Lilou!’ But those crafty animators told her “Now it is, and you have to get to like it!” (Don’t worry, all of the crew are now friends). I can imagine how difficult it must be to relinquish such a personal creation to others and not have it come out exactly as imagined; Lilou is an emotional film without words and it’s not easy to see the differences in the hands that animated different shots of Lilou. “You have to pick your battles” Rawan said when it comes to visual details, and “it might not be perfect but its about the passion we put into it.” “Traditional animation is a dying art,” and “I chose animation because it is so time consuming and expensive,” (two pieces of advice that can’t be taken at face value without the benefits of industry experience and Rawan’s charming inflection). If there are any technical mistakes in her film, it only makes it “beautiful and human.” 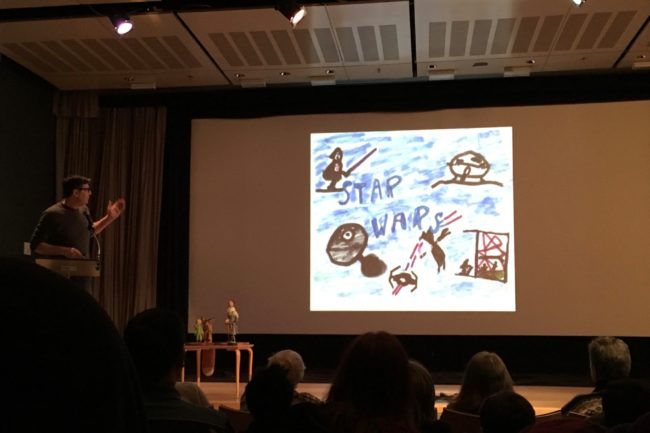 Rahim’s conversation about Lilou and whether or not people stopped dreaming tied in nicely with the other panel member Mark Osborne and his film The Little Prince. I’ve discussed his film in detail in a previous article, but theres always room to learn. Mark started his trend of mixed media animation in CalArts, with his thesis film Greener, which was mainly stop-motion with underwater scenes rendered in hand-drawn animation, and a climatic reveal in live-action. This culminated in The Little Prince which is a combination of CGI animation and stop motion. There was even use of “paper clay” which hardens like clay but has the texture of paper. Mark showed some initial character designs of the “Girl” character by Peter de Sève (famous for certain New Yorker covers) and compared them to the designs for “the Little Prince” by Alex Juhasz. And it was nice to see again how the Jacques Tati movie Mon Oncle directly inspired the houses in The Little Prince.

Elizabeth Ito closed out the panel with her film Welcome To My Life, about and voiced by her close knit family. An allegory for growing up Asian in a Caucasian neighborhood, this film is about a monster family in the suburbs. We follow a day in the life of Douglas, AKA T-Kesh, a teenage boy monster going to high school, who is based off her younger brother. His world is neatly summed up by his nickname, which is a rap version of his Japanese middle name, and it is a generally happy story about making friends. Elizabeth had a lot of fun figuring out what the monster would look like, when she had to draw in him 100 different poses doing different things, stretching and reaching all over the place. 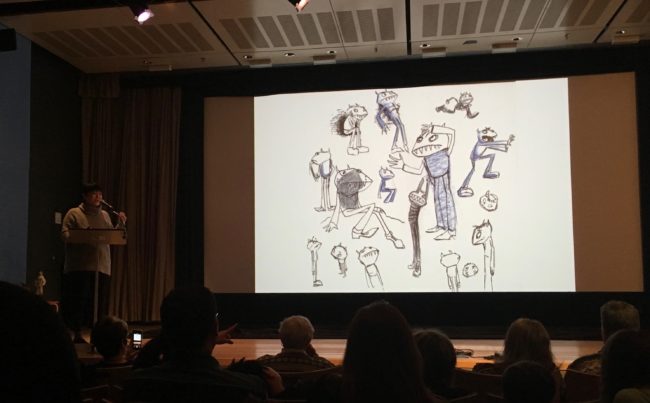 Elizabeth Ito walking us through her character design process.

Elizabeth, who is now a supervising director of Adventure Time, originally developed the story as her thesis film at CalArts (which had a careful hand drawn roughness). Now years later it was pitched to and picked by Cartoon Network Studios. Elizabeth designed the character and sent the turnarounds off to be modeled in 3D and animated by the French animation studio TeamTo. She told us of an influential trip to Paris where she learned how to use her phone apps to combine drawings with photos to make a fun Instagram feed; now in the film we see how photos of her home town and school were used to created photorealistic backgrounds. Welcome to My Life was pitched as a series, but there/s no word yet on development.

As usual with the NYICFF, kids get first pick for the Q&A, which is nice because sometimes you get fresh questions. All of the filmmakers favorite parts of their films is watching their work with an audience. Mark Osborne described watching the film with 12 different international audiences and being scared 12 different times. He advised us not to be ashamed of who you are and your love for Star Wars, and that “Toy Boy” is actually a pretty cool nickname to have. Rawan Rahim told us not to be afraid of rejection and to constantly make your own stuff; it’s ok to have weird thoughts, everyone has them but not everyone talks about it. And when asked by a child, she retorted “Who says [Lilou] doesn’t have a nose, just because you can’t see it?” Elizabeth Ito’s advice to brothers who drive you nuts was to keep in mind that one day you could be great friends. And that it’s great to tell stories about what happens to YOU; your point of View is important and unique, it’s what people want to hear about.  Finally, the best question by a panicked child about production was “Why isn’t, how come, why don’t, how do you, what is, why not just draw the films FASTER?” 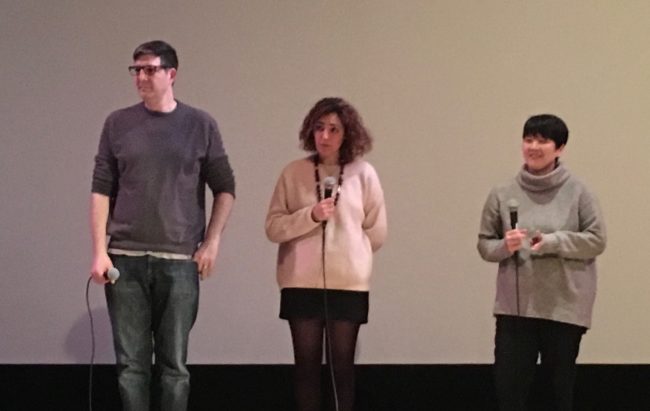 The NY International Children’s Film Festival takes place in a variety of theaters across New York City every March, and has just celebrated its 20th year.  While it has just concluded, please visit their website for a list of winners, upcoming repeat screenings, information on animation camps, and other news.