Posted by Tristian on Apr 1, 2016 in Uncategorized | No Comments

The East Coast premiere of The Little Prince was attended by its director Mark Osborne, at the School of Visual Arts theatre in Chelsea, Manhattan, on Tuesday March 15th.  After Osborne introduced the film and tossed free NY International Children’s Film Festival t-shirts into the audience of ecstatic screaming children, he came back after the credits to take questions from the audience.

It was around 2009 that Osborne was originally asked to adapt the book, but he said non, il est trop difficile.  [He’s not a native French speaker, but it’s more romantic, oui?] He thought about it for over a year before he accepted the grande responsabilité.  In his pitches, Osborne used a ‘magic suitcase.’  “Mon Dieu!  It’s full of Stars!” Hans Zimmer (composer) was heard to exclaim, before he was sucked into a trans-dimensional portal to Jupiter’s Great Red Spot.  Inside was a diorama built by one of the modelers of Coraline, complete with light-up stars and stereoscopic slides of the movie’s puppets.  It certainly helped convince people around the world that the movie was worth making.

Osborne first read The Little Prince when his petite amie (now his wife) gave it to him in art school, over 25 years ago.  They were dating, but they were about to start a long distance relationship.  His lover pointed out one line in particular: “Tout l’essentiel est invisible à l’oeil / Everything that is essential is invisible to the eye.”  ‘We will always be together,’ she said.  The book turned out to be more than just a romantic sentiment though, it was a unique dialogue on what it meant to be an adult, from the point of view of a child.  The Little Prince takes a crazy story that lives in the imagination and pays tribute not only to the experience of being a child, but how you learn to be a child.  The story’s narrator The Aviator always apologizes that his drawings are ‘not so good,’ and asks you to believe beyond the drawings. 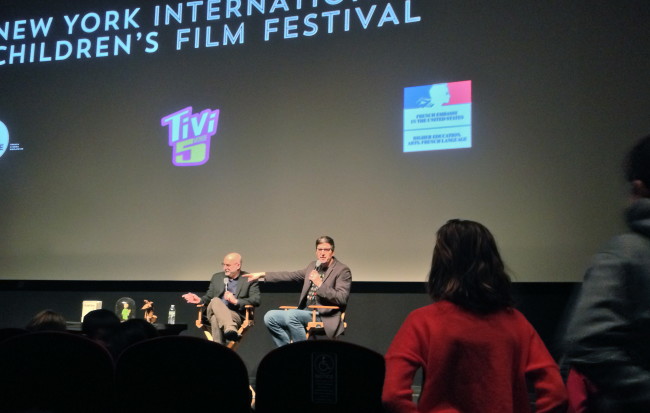 Very early on it was decided that in order to protect the sanctity of the book, there would be two animation styles.  Osborne did not want The Little Prince to be ‘just another big CGI film,’ so he added poetic stop-motion to emphasize the book itself and the imagination of the Little Girl (Mackenzie Foy, Interstellar).  This helped the sell the idea of protecting the book.  The movie’s new CGI narrative involves the Little Girl, who is raised by a [Single] Mother (Rachel McAdams, Mean Girls).  The Girl’s life is exactingly planned down to minutia, to prepare her for private school, and one day her kooky next door neighbor, an elderly Aviator (Jeff Bridges, The Big Lebowski) gives her the story of The Little Prince.  The Aviator’s house is disjointed and rough-hewn, a unique hold-out to the gentrification of every other house, which were plucked from the set of the nearest Jacques Tati movie.

The Aviator and The Little Girl, img src: NYICFF

A lot of paper was used in the Stop-Motion section, which covered the actual story of The Little Prince book.  The contrast in textures really makes the controlled artificial suburban reality of The Little Girl stand out.  It took just over a year to animate the stop-motion, about 16 minutes of scenes.  In comparison, the CGI section took about 2 years.  The paper (noticeable in the opening shots of a plane flying through the crinkled clouds, and in waves of sandy desert grain) evokes the actual pages of the story that the Little Girl reads (and to the audience, the pages of the original book).  As beautiful as the paper puppets were, their paper outfits were required to be rebuilt multiple times. 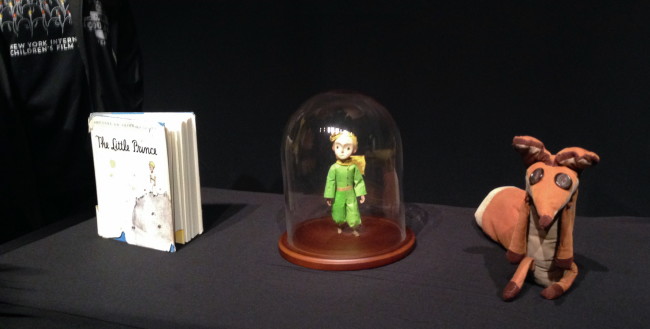 A Little Boy asked if the displays were on sale! Sadly not, but there are original drawings on sale at the Gallerie Ardulik in France.

In the book, The Aviator asks you to imagine the story continuing, so Mark Osborne did just that.  He wrote his own story around the narrative.  As summer draws to a close, <<SPOILER ALERT>> the Little Girl is suddenly separated from her new Aviator friend and decides to find the Little Prince.  As the book ends with the Little Prince disappearing into the cosmos, Osborne imagines that he gets sidetracked on his way home.  The Little Girl has to remind the Prince of his innocent childhood in order to save him.  The climax of the fantastical story is built out of the Little Girl’s own fears, and the fantasy shows how she overcomes them.  The Little Prince is voiced by Osborne’s own son Riley, who proved to be such a great actor during pre-production that he was officially cast, while the older Mr. Prince is played by Paul Rudd (Wet Hot American Summer).  <//SPOILER ALERT>>  Originally the Little Girl was Osborne’s daughter, but she aged out of the character, during production (braces, c’est la vie). 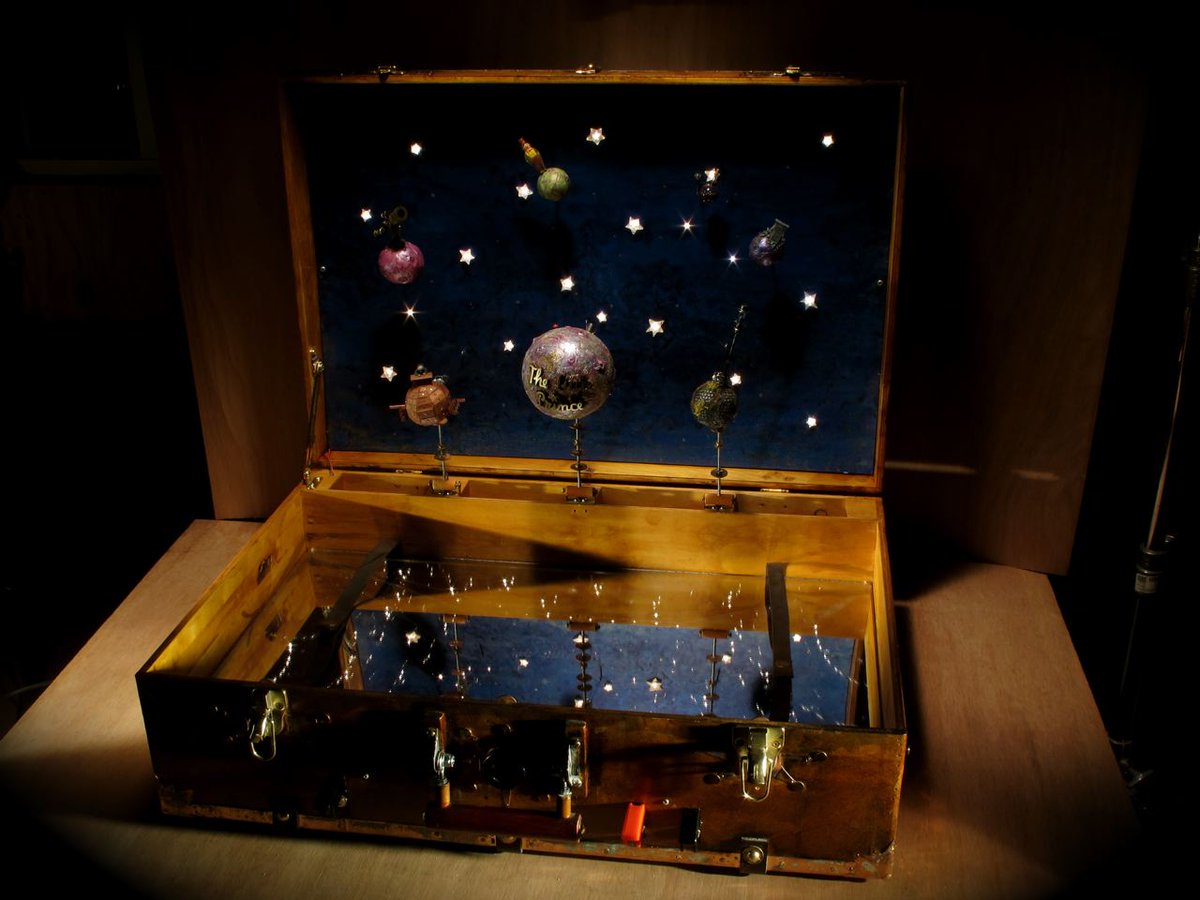 No matter what age you are, Mark Osborne told us, you see different things about the book.  The Little Prince speaks to grown-ups, kids, and the child you are still, and he hopes that you will see something different about the movie if you watch it again years from now.  The Little Prince will reach the USA via Netflix later this year.

A quick-notes guide to the original book’s story and themes from the official The Little Prince website.

Behind the scenes guide to the movie at I.A Magazine (International Animation Magazine?  No explanation on their website).

Color scripts of the movie at Celine Desrumaux’s Tumblr.

A description of Osborne’s Magic Suitcase from the L.A. Times.

Deadline’s report on why Paramount could have dropped The Little Prince, which was then picked up by Netflix. 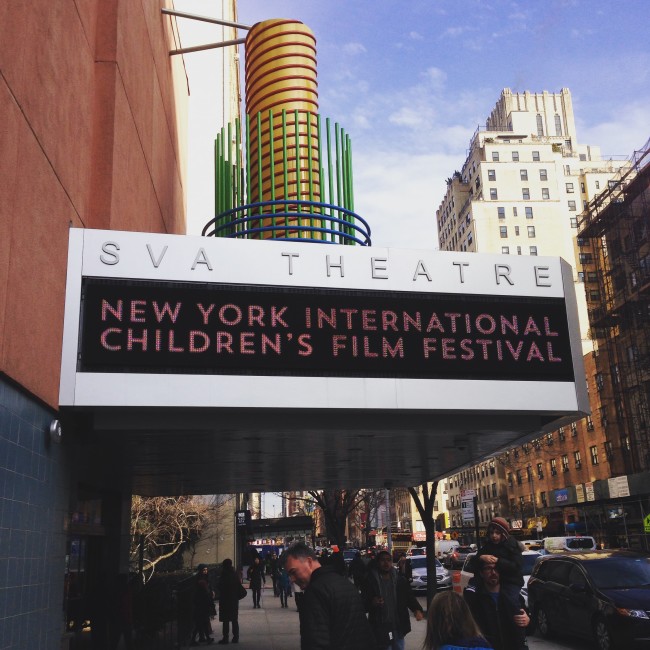 I would like to thank the New York International Children’s Film festival for premiering this wonderful film, along with others such as Long Way North, Adama and The Case of Hana and Alice (which I personally recommend since other films have enough publicity). This is my second year on the Festival Screening Committee and I’m glad to have to opportunity to cast a critical eye on new animated short films (and live action, when duty calls).  While I am temporarily cast adrift in the turbulent sea of my career and family life, I thought I would have more time to discuss these great animations and do more for ASIFA, but this is not the case.  However, I can provide a few more highlights of the many screenings from the festival:

Julia Ocker (Germany) strikes once again with her new film Octopus, winning the Audience Awards Ages 3-5.   She won the same award last year for her short Zebra.  A hilarious short about an Octopus baking a cake, and one mischievous tentacle who won’t follow orders; great character animation.

Lilou by Rawan Rahim (Lebanon/France) is a tear-jerker, the story of a shy little girl who receives a magical item to help her over come her fear of people, and understand their problems.  Ten points to the scene of a cat asking for the check.

By the Name of Boston by Grant Kolton (USA) is a fast paced existential comedy about a boy and his scorpion friend that really examines what it means to tell a story.  Excellent narration.

There were several ties this year, as you can see below: