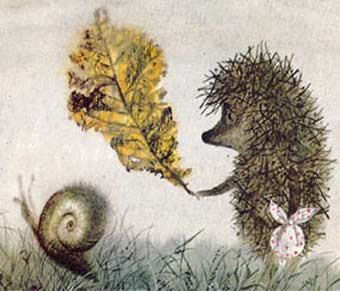 still from Hedgehog in the Fog

Acclaimed Russian animator, Yuri Norstein stopped by the SVA theatre last night, to show his films and have a Q & A with the audience. The animation community here heavily anticipated the evening, and the house was packed. It had been 10 years since Yuri’s last visit. Many well-known NY animators turned out to hear him speak, and it was very inspirational to be listening to such an amazing artist.

Yuri spoke candidly with the audience about his meticulous approach to animation. Yuri’s film’s are painstakingly made, and are much more intricate to make than ordinary cut-out animation. It involves the use of multiple glass planes that are moved in any direction away and toward the camera, allowing Yuri to achieve a unique 3D look to his animation. His films are very autobiographical, and his life experiences have greatly influenced his storytelling and characters. He is very much interested in the psychology of the situations rather than in depicting gags. He laughed and readily admitted no producer would possibly tolerate him. It can be hard to communicate your ideas as a director and he finds it quicker and more efficient to do all the animation and camera work himself. He works with a very small team, consisting of his wife, his cinematographer, and a few others. When asked if he had an apprentice, he spoke of his teaching days and enjoying spreading his knowledge to others. He harbors no secrets.

Yuri screened The Crane and the Heron, The Hedgehog in the Fog, a short film based on a Japanese poem which I missed the name of, and about 10 minutes of The Overcoat. These wonderful, whimsical films are often funny and endearing. Yuri has been working on his latest film, The Overcoat, for well over a decade. I believe most of his films are based on fairy-tales he told his children, and other short stories. They are mostly black and white, which for Yuri, holds a strength and energy that is unique. He is more concerned with the dramatization of the characters, rather than the materials used. It was very interesting to note that all the pieces used in the makeup of the characters were completely unattached to each other. He moves them all separately based on what he needs for the scene. It was also cool to note that the entire film is shot without editing on what is probably an Oxberry fitted for multi-plane use. Very little modern technology is used. A fun quote: “There is a short string from the heart to the hand. You can’t possibly put those feelings into the computer.”

Yuri is very outspoken and fun to listen to. The actual translation of his words proved to be very challenging but I think for the most part, his point came across. When screening The Crane and the Heron, Yuri amusingly yelled “Stop, stop!” It was quite the little commotion, but the film was in the wrong aspect ratio, and it was important that it be correct. I really enjoyed learning more Yuri and his films, and I look forward to seeing The Overcoat in its entirety one day soon.