On Saturday March 9th, a little less than 24 hours after a romantic snowstorm, the sun shone down on the beautiful people of New York.  Many people were walking their dogs or riding their scooters up and down 23rd St by the School of Visual Arts theatre, and bravely showing off spring sweaters in 50 degree weather.  While there were plenty of cute couples and recuperating party-goers, there were just as many families and anime-fans.  Because that day, Mamoru Hosoda was coming to New York.

Mamoru Hosoda has directed the Digimon movie, the One Piece movie, The Girl Who Leapt Through Time, Summer Wars, and most recently, Wolf Children.  Wolf Children is a remarkably dramatic slice of life feature about Hana, a single mother raising a girl and a boy (Yuki and Ame) who can turn into wolves.   Hosoda arrived in Manhattan straight from Japan, where he just accepted the 36th Annual Japan Academy Prize – Animation category for Wolf Children.  There was so much excitement for his appearance at the New York International Children’s Film Festival’s 6:30pm screening, that it quickly sold out.  Fortunately a second screening was added at 4 o’clock, which sold out as well. 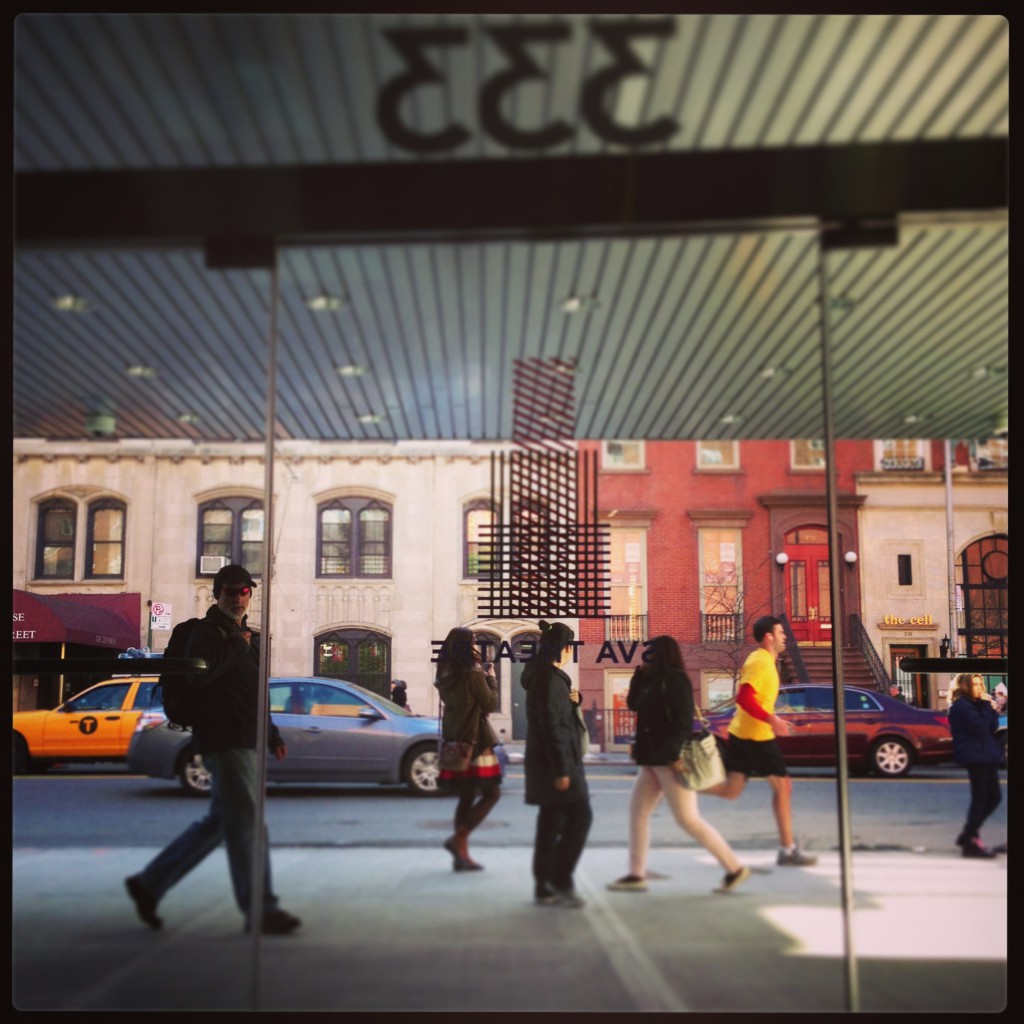 I have been volunteering at the NYICFF for a few years now and sometimes my responsibilities include “the waitlist.”  The Waitlist helps people get into a screening at the very last minute (no guarantees, further details on their website).  We all know that sometimes people get food poisoning or get abducted by extraterrestials, so odds are there may be one or two seats available .  [If you are willing to stick around like Schrodinger’s cat, you could get in, even though honestly, why didn’t you just order them ahead of time?]  I sat in my carefully chosen Festival T-shirt-suspenders-combo outfit and got my clipboard ready.

Mamoru Hosoda, dressed all inblack, arrived with his translator.  He emerged from the green room to smoke outside.  I thought this made him more interesting and I watched him briefly.  Suddenly, an orange-haired fan-girl appeared.  I recognized her from when I sadly said there were no more tickets.  I looked on from behind the closed glass doors as the fan and the master interacted.  It was a quiet moment, with all the sounds from the street blocked out, and the cigarette smoke lightly grazing the dyed-hair.  The girl had told me that she didn’t even need to see the movie again; she had just wanted to hear Hosoda talk.  I saw the pantomime of their conversation, which began and ended with two bows.

Autograph crowd on the left, ticket holders on the right.  Hosoda is the black haired man in the middle of the crowd.

Wolf Children runs at 117 minutes.  Add a Q&A and that makes for a quick turn-around for two screenings in the same theatre.  After the movie ended, all the volunteers worked together to collect audience-reaction cards, guide people out, and hand out movie posters (11×17).   For the second screening, there was a line down the block!  Everything was pretty groovy until Mamoru Hosoda came out and one little girl asked him for an autograph.  KABOOM!  Everyone wants an autograph!

I really have to hand it to Mamoru Hosoda.  Not only did he take time to draw one of the movie characters for each fan (Yuki for girls, and Ame for boys) but he also asked the FANS questions of his own.  Each time I passed by, I heard him discussing (thru his translator) which movies the fan enjoyed, or what job did they have, or what they wanted to be when they grew up.  He signed anything from obscure anime scrolls to foreign DVDs and even asked the fans for a photo of the two of them.  More than one person walked away in a daze.  Hosoda took a break to introduce the next screening, and for another ciggy, but he always came back and soon finished the whole line of fans. 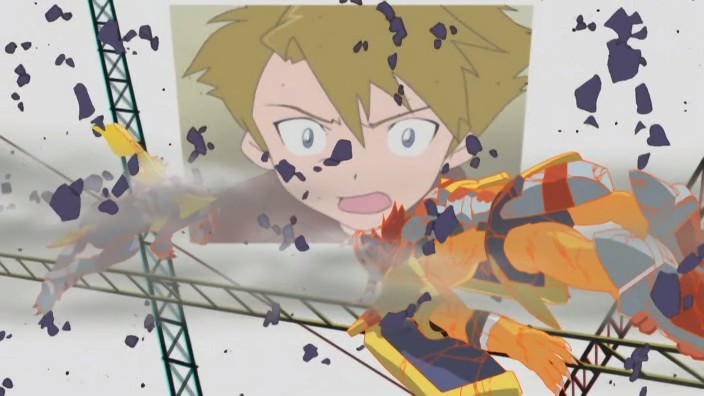 Once I had finished all my volunteer duties, I was able to catch the latter part of the film, and the Q&A.  I missed what had to be a magical and romantic opening where the mom and dad meet, and when the dad dies, but most of the movie takes place on a country farm.  Very little magic is actually involved, and instead most of the action is drawn from the challenges of raising two kids on your own.

Eric Beckman (NYICFF co-founder) introduced Mamoru Hosoda to the crowd after the film.  Hosoda has premiered other films at this festival, including Summer Wars.  Eric started off by asking Hosoda why the film was centered around the mom’s P.O.V.  Hosoda said that he wanted to show kids how difficult it can be for parents to raise their children and see them become independent.  “Thank you!” some hapless parent shouted, and we all chuckled.  One kid wanted to know if Hosoda grew up in the country since the movie had such a rural setting.  Turns out, the backgrounds were based on the countryside of Hosoda’s childhood, and that the mountains were the ‘Northern Alps of Japan.’  He drew heavily on his own memories of being raised by his mother. 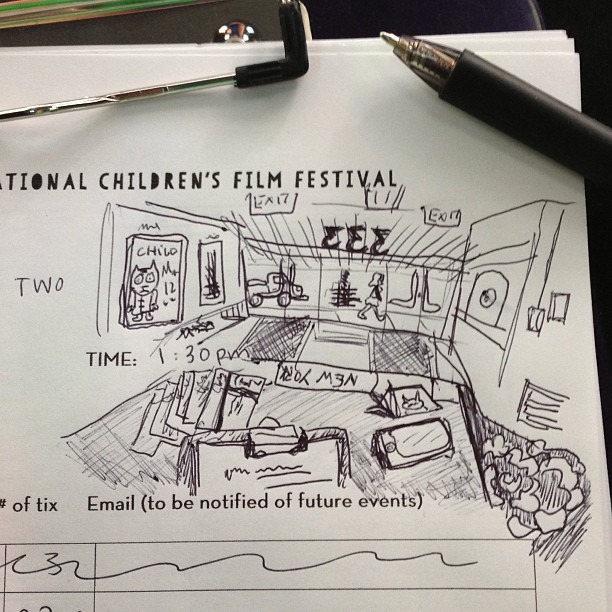 One great kid asked: “Why is the movie so depressing?”  Hosoda laughed and asked him how old he was.  (8 years old).  Hosoda explained that while the kid might find the movie sad now, in a few years or when he grew up he would find it moving and fantastic.  Another girl asked if he got the idea for wolf-children from a childhood story or if he was just staring at something.  Hosoda told us that wolves are now extinct in Japan, but he has a secret hope that there is one left somewhere in the woods watching over them.

Some kids didn’t quite understand what happened to the father, who apparently was discovered dead in wolf form surrounded by feathers.  Hosada reminded us that the last thing the dad promised to do was get a tasty bird for his kids’ dinner, but never returned.  He said that parents have to work to feed their children, and sometimes they don’t always succeed.  One woman remarked on how lifelike the shots of spider webs and raindrops where, and asked if he used any video footage in the production.  Maybe something was lost in translation, but Hosoda assured us it was all drawn by hand.  He was so proud of these scenes, he told us, and even when he screened it for the Pixar company they were impressed. 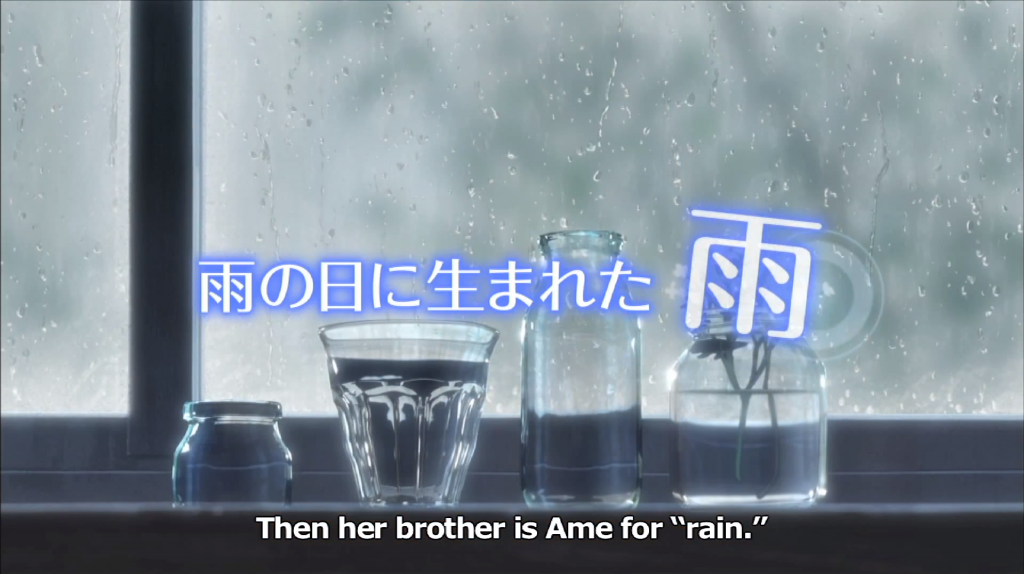 Wolf Children kinda presents magical powers to young kids in a different way then they are used to in America, seeing as how Yuki and Ame saved the world exactly zero times.  One kid wanted to know more about how being a wolf changed the children.  In the movie, when Yuki is younger she turnes into a wolf more often, but as the kids get older, the boy Ame spends more time as a wolf.  It’s a pretty heavy dynamic to explain to kids, but Hosoda presents it perfectly in the film, and told us that essentially, all kids grow and change.  At first, Yuki is more energetic and wolf-like, but as Yuki ages, she (as a girl) can see the social structure of humans more clearly and decides that is her path.  Ame starts out very timid and shy but when he gets older, he chooses the mystery of the forest.

Hosoda wanted to make a movie that captures the change you experience in a chance meeting, love at first sight.  He compared it to the feeling of “meeting all of you here in the theatre.”  It was obvious that he was still feeling great from signing autographs.  Eric Beckman hinted that maybe there was another reason he was feeling so happy, and Hosoda told us that five months ago, right after wrapping a 3-year production of Wolf Children, he was blessed with the birth of his own child!  Adorable. 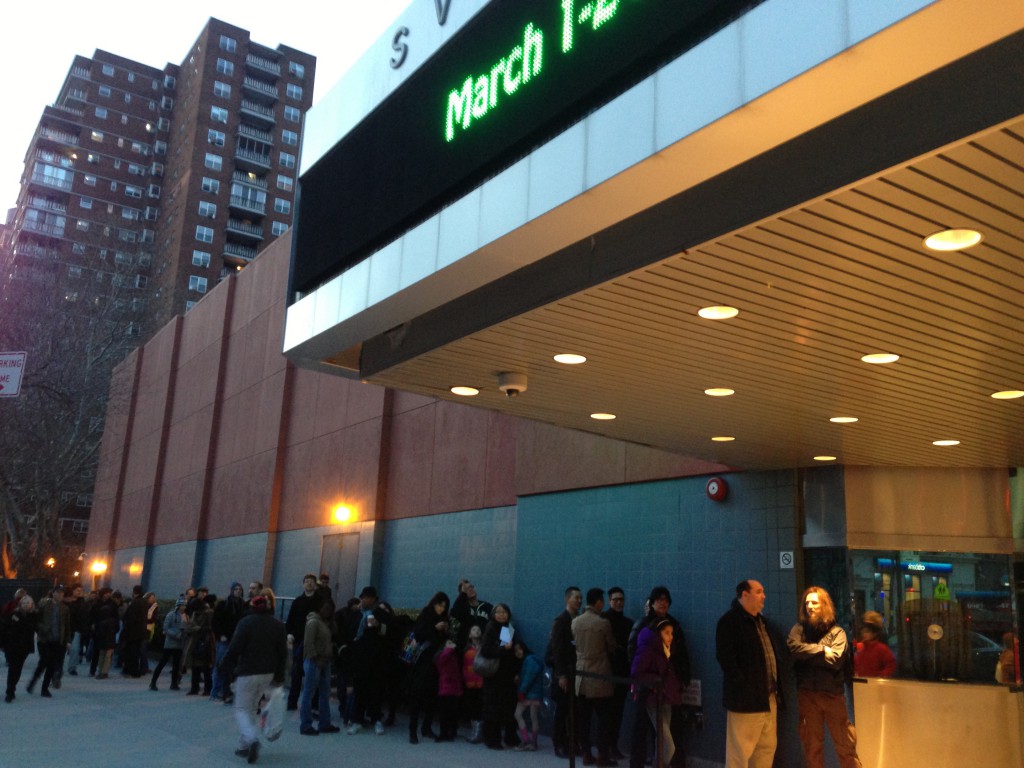 Ticket Holders lines for Wolf Children at the SVA Theatre

To wrap up the evening, one girl asked what Hosoda had in mind for his next film, since Summer Wars was about technology, and Wolf children was about nature, what was next?  Hosoda told us that he had heard people say that because his last two films were so different, they must have been made by two different directors.   Therefore he wanted to make his next film totally unique so that people would think there were 3 directors!  Finally, one cute kid asked what Hosoda thought of free human/wolf love.  Hosoda said not to worry because the father character was unlike scary European werewolves, and he was just a nice gentle wolf man.

“Wolf Children” is available on home video from FUNimation, with an eventual US theatrical release.