Welcome to the Space Show!

Sunday evening: Prince Street subway station.  I am waiting patiently for my train.  The ticket-collector gives me the all clear.  Launching myself into the space between the platform and the tracks, I bounce less than gracefully down to the doors of a vast bio-mechanical centipede space dragon.  The doors slurp open and I step into a nice plush interior.  Where shall I sit?  An explosion of rainbow stripes in full Technicolor-Yellow-Submarine-Mucha wonder collaborate to form the perfect cushion for my body.   Five minutes later I am back home in queens.  *Bing* “Stand clear of the closing doors please…”

If ONLY!  This is just one part of “Welcome to the Space Show,” which was screened recently at the New York Children’s International Film Festival (NYCIFF).  It most likely sold out 5 minutes before you started reading this, but a little rough Googling will help you out.  “Welcome to the Space Show” is a 2.25 hour-long movie from Japan about 5 kids who take a trip into space.  It is an animation full of phantasmagorical characters, action packed sequences, leisurely paced emotional dramas, and a few too many plot developments, but it is well worth the effort for any decent Animati.

One of the reasons I like the NYCIFF is because it frequently challenges American’s perception of what is “kid-friendly.”  Or “kid-comprehensible,” for that matter.  I don’t know anyone who would actually leave five children in a cabin in the woods alone for a whole week.  But thank God they did, because then I never would have gotten to see THE SPACE SHOW!!!!  “The Space Show” is a pirated weekly serial that is transmitted instantaneously across the galaxies.  It might be about a dashing silver knight rescuing a princess or something, but more importantly the show is hosted by a hilarious bouncing red ball with one eye and a beautiful furry dog vocalist.  Everyone in the universe loves the show, and we silly Earthlings have never seen an episode.  “The Space Show” animation is one of the best reasons for you to see “Welcome to the Space Show.”  Imagine MGM movie musical meets “SuperJail.” 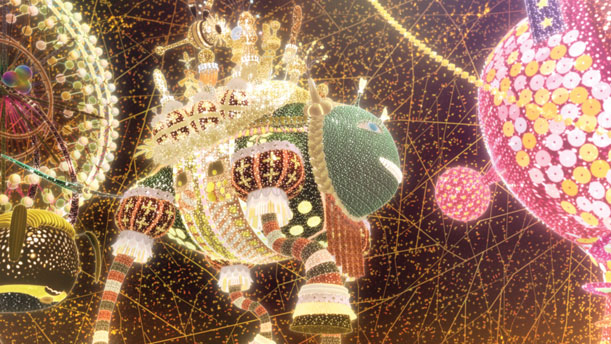 Miyazaki must be a leading force in Japan, because now almost every movie of theirs offsets the science-fiction with scenes praising nature and simplicity.  “Welcome to the Space Show” goes through the motions of this, but makes up for it by revealing strange aspects of Japanese culture.  A little boy runs around with out his pants.  Girls mysteriously age ten years whenever the camera pans over their sleeping bodies.  Kids immediately volunteer for child labor.  The heroine automatically assumes she’s going to do major jail time for selling food… There is cell-phone reception on every planet, and alien dogs are allowed to flirt with little girls.

I suppose what I like about this film is that it creates a universe that would make sense to any adult, but just happens to be centered around the particular journey of 5 children.  This is most accurately reflected in the acting of Poochi, the space dog who has to take care of those kids.  He talks with just the right amount of feigned simplicity and good nature that you need with children.  Unfortunately for them, there are major problems with the universe, and they have real and dangerous consequences.  In the fifth act we get several high-minded explanations for all the drama, one of which includes the debate between self-sustaining energy and limited resources.  Nerd Alert: the other stuff you probably won’t understand unless you know what “Zonama Sekot” is.

While “Welcome to the Space Show” is long, messy, and hard to digest, I think it will be extremely inspirational to kids and animators everywhere.  Please watch the film (in HD if you can) and enjoy.

“Can you tell me about the origin of the universe?!”

“Oh yes, I’m sure someone recorded it.”