I first saw Vacuum Attraction several months ago at a screening, and thought it was one of the better films of the evening. This was primarily because the screening had too many dark and dramatic films, and not enough comedic films. Vacuum Attraction is a funny film that fearlessly takes a perverted and bizarre act, and milks out just enough to keep the audience interested. It is another adventure from Morgan Miller’s world of Slushing Brooks.

A simple yet detailed animation style returns us to the town of Slushing Brooks, where we once again get to hang out with the very charming Jeff Twiller. In this short, Jeff finds himself testing a hypothesis: can a man derive as much sexual pleasure using only a vacuum cleaner? The hypothesis is correct, but miscalculated. The miscalculation requires help from his buddy Randy, who succeeds in correcting the situation, only to fall into another. Still, nothing smoothes over a rough situation for Jeff except for a meal from Chicken Shack. 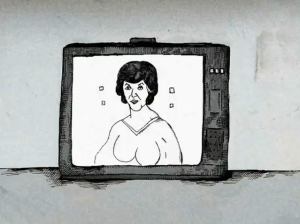 Be sure to check out more of Morgan’s work at slushingbrooks.com.