Posted by Tristian on Nov 8, 2017 in Uncategorized | No Comments

And though the news was rather rad / Well I just had to go / I saw the invitation.

Nobody was really sure / If he was from the House of Yes.

A crowd of people dressed to 9 / But I just had to watch, having loved the band

I woke up on May 6th, excited to attend Little Cinema’s Secret 30th anniversary “Guess the film” immersive show. It promised to be animation themed, and after attending their previous Who Framed Roger Rabbit? experience I was intrigued. All my money was on Fantasia, but it was The Beatles’ Yellow Submarine. I picked out an animation themed t-shirt (printed by Fluidtoons), dragged a comb across my head and set out.

There are several elements to a Little Cinema immersive show.  One: the film will be interspersed with various musical acts. It could be two aerialists playing ukuleles, a battle between two tap dancers (‘Prince’ vs ‘Marty McFly) or a violin solo. You won’t know when its coming, but suddenly the movie will morph out of time as the video DJ (Jay Rinsky, founder Little Cinema) stretches, loops, and distorts the audio and video tracks, giving spotlight to the performers while retaining the narrative of the film. 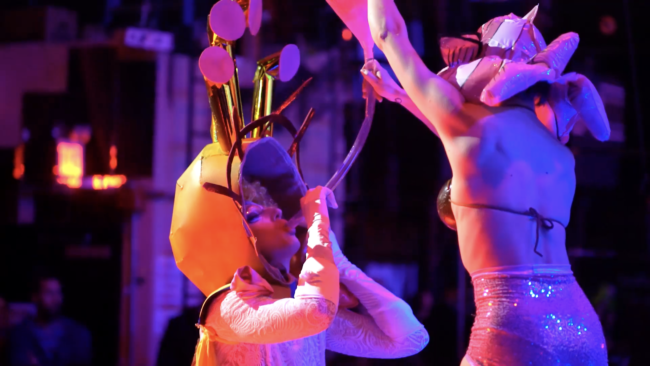 The 2nd part is the drinking game.  Drinks can be purchased at the bar in the lobby (a Baudelarian affair of hardwood, ceramic, and mirrors), and usually there is a special cocktail mixed for the film. You will be told very clearly to drink when they say “Yellow Submarine,” by the night’s host Madame Vivien V, who came out in a fantastic Yellow Submarine costume dress (made by Joyful Jam, similar to Mother Ginger from The Nutcracker). Madame V does a beer bong shot every time, assisted by a Blue Meanie, and will spew beer over the crowd when she feels like it.

The cast of the show includes gender bending Sgt. Peppers, Blue Meanies, clowns, and more, even Mr. NoWhere Man. The best was the Chief Blue Meanie with 4 growling dog people. Oh no, the best were the Apple Bonkers, who came out on Stilts and threw real apples at everyone. (There are penalties for drinking at the wrong time!) 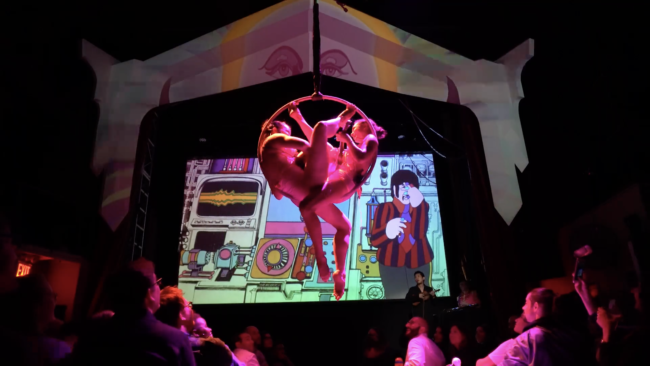 There is great projection mapping, by Josh Slaby. To begin with, we have a gorgeous 4K restoration of the film itself. Crowning the screen is an arched awning framing the entire stage, chiseled and layered in a classic geometric style. Normally video is projected onto it to give the effect of hundreds of little light bulbs like a theatre marquee. But during the movie, it extends the story’s environment out into the audience, bridging the gap between film and performance. The best example of this was in the scene “The Sea of Holes,” where the Beatles lose the Yellow Submarine. (Drink!). As the boys run from hole to hole, room to room, the submarine flying by, the film has been cleverly mapped to extend the confusion even further out from the edges of the movie screen, so that the submarine seemingly twists and turn around the entire theatre.

Simple projections can go far, as seen in the spaces before and in-between the film, when the curtain is down. The motion graphics of title cards (by Shira Inbar) “Little Cinema” and “Intermission” rendered in a tall thin block font are escalated when projected on a curtain with many tight folds. When you add movement of smaller words running left right within the giant letters themselves, you get an amazing effect of text rippling across the stage, while still maintaining legibility. 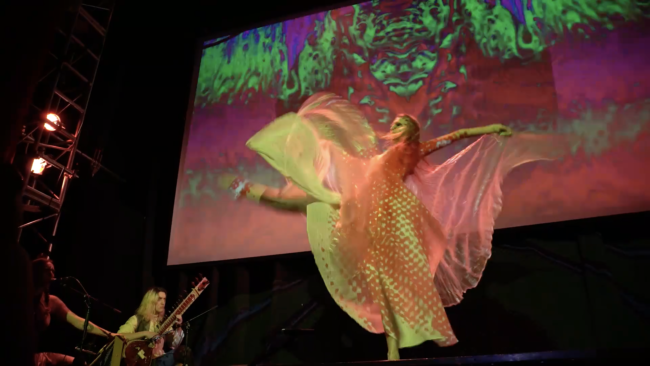 Other instances of projection occur on the performaners themselves. Katherine Crockett (co-producer) danced to sitar music in a special costume, that appears all white.  A long diaphanous pleated dress flared out with her swirling turns, further enhanced by a translucent cape that extended out from her arms by means of batons, capped by her head of long blonde hair. Upon this canvas was projected a highly detailed kaleidoscope that was half Roy Lichtenstein and half Beetle.

Turn off your mind, relax and float downstream indeed!