Bill Plympton and Patrick Smith are two spearheads of independent animation, especially within New York’s own animation scene. Their films are some of the most memorable to come from the first generation of MTV Animation artists. Along with their films, Bill and Pat are also known for their championing of hand-drawn animation in the digital age. Their views and opinions on animated filmmaking (while each still individually different) bear so many similarities, that it was inevitable they collaborate on something. That something became their Scribble Junkies blog, which showcases both their professional endeavors (mostly Bill’s updates on his work) and their overwhelming appreciation for various mediums of art (Pat’s Epic Sketchbook series). Their blog entries cover subjects far beyond New York, with Pat now stationed at Tisch Asia in Singapore, and Bill’s festival travels. 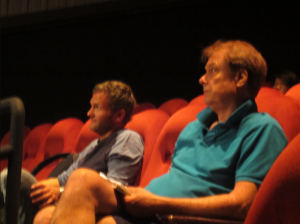 In 2011, Bill and Pat curated the first Scribble Junkies Festival of Drawn Animation. This year’s screening (the second) was held at the SVA Theater, and it couldn’t have been a more comfortable and suitable setting. It provided Bill with a large platform to hand out merchandise and his trademark offering of a Bill Plympton drawing. The Screening is all about hand-drawn animation in the strictest sense. For years it has been the most obvious and upfront form of animation (most people still recall Bugs Bunny and the Looney Tunes, or features like The Lion King). And despite the advances of the digital age, hand-drawn still remains a unique form itself. 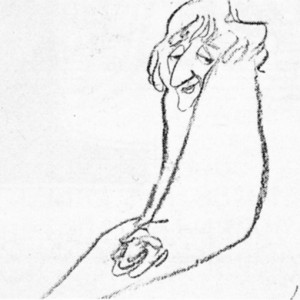 Bill and Pat introduced the screening and the show’s lineup. Richard O’Connor, of Ace & Son Moving Picture LLC, was brought up to give a very moving eulogy to legendary animator Tissa David, who passed away earlier in the week. As evidenced by Richard’s eulogy (which can be read in full here), Tissa David wasn’t just a hugely influential animation artist, she was hugely influential on all the people she worked with, some of whom became lifelong friends. To add to Richard’s eulogy, two clips of Tissa David’s animation from Sesame Street preceded the program. 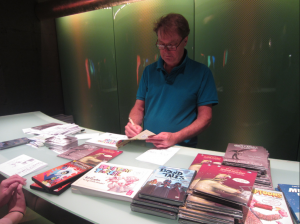 Following the program, Bill and Pat introduced the filmmakers in attendance: Brett Thompson and Twins Are Weird (aka Joy and Noelle). The Q&A turned out to be quite a scene. One particular question directed at the Twins questioned if they would ever put these films out for money. Seriously, just because we’re artists doesn’t mean we don’t deserve any credit. Still, Joy and Noelle won the audience award that night.

A full video of the the Q&A can be seen here.

The program featured many established works, some of which can be found online. 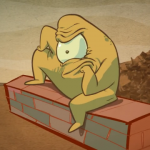 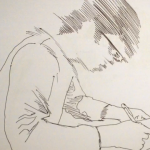 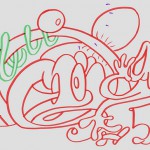 The title says it all. Ha Juan’s brief yet detailed film is all drawing, with no sign of digital ink. The perfect introductory piece to the Scribble Junkies show.

A music video with a lot of great cartoon animation. And there’s nothing like a great cartoon that makes even germs and bacteria seem appealing (the author really means this).

A film for which no still image could do it justice. German animator Andreas Hykade’s film is both visually mesmerizing and a who’s who of animated characters.

Although the least finished film in the program, Kristen Lapore’s film is cheery with a subversively cute and catchy folk tune. Bill and Pat were quick to point out these two contrasts.

A second music video in the program, but one with a more conceptual theme, complimented with striking graphics brought to motion.

Notes on Biology by Ornana

A technical stand out in the program because of its use of pixelation, Notes on Biology is a very charming tribute to high school students who aspire to become our fellow artists and (in this case) animators.

Brett Thompson’s Fluid Toons have been mentioned quite a few times on the aNYmator, including a special Viewseum entry. Since his recent move to New York, Brett’s animation and art has turned up in assorted places all over New York (and thanks to Pat, a special plug on the Scribble Junkies blog).

Pat’s contribution to the show is actually an older film of his from 1999. Drink is the oldest known of his independent short films, and still perfectly exemplifies his style: innocent looking humans, strictly hand-drawn with obvious pencil, merged together and appearing out of one another. Pat created the film during his tenure at MTV, and it still holds up well years later. Meanwhile, Pat continues to work away on his new short film. 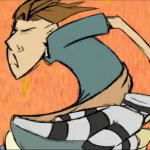 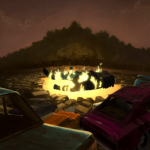 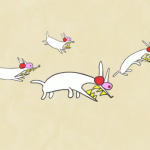 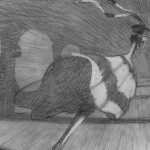 Animators make cycles of one form all the time. Factory, however, is built all around a hand-drawn cycle and even carries the theme of “man-made.”

Considered the centerpiece of the screening, Dutch filmmaker Hisko Hulsing’s new film, Junkyard, makes it American debut. Rendered in a style reminiscent of oil painting, Junkyard is a tragic yet compelling story of two childhood friends who go down two very paths only to tragically converge years later. At 17 minutes, it is the longest film in the program.

Pat Smith particularly complimented this film for successfully following Junkyard. Twins Joy Vaccese and Noelle Melody are creating a series based on these short and revealing tales (not revealing about the Twins mind you). These two shorts display the Twins’ illustrative style, both cute and subversive. The shorts are currently making their rounds throughout festivals. The first, entitled Cee Cee Does Acid was also one of the first shorts featured on the Viewseum. Tonight, they presented it with a new color scheme.

Many artists and animators look to make something that can be described as “twisted,” but anyone who mis-uses the word should watch this short. Italian animator Donato Sansone’s is all hand-drawn imagery (with only some minor computer assistance), twisting and contorting into one another. The series of nightmarish imagery is like an abstract painting come to life.

Excerpt from Cheatin’ by Bill Plympton

Bill’s contribution to the show. For the past couple years, Bill has been hard at work on his 10th feature film, Cheatin’ Although Bill has shown this particular clip several times in pencil test form, the clip is now presented in finished color. The addition of the color gives a fuller sense of the film’s final look and mood, which is already vastly different from his last feature, the highly acclaimed Idiots and Angels. Bill plans to have the film completed by 2013. 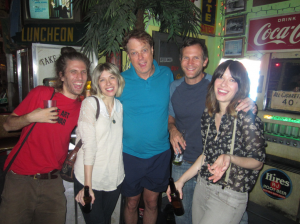 Bill and Pat appear determined to keep the Drawn festival going for a while. And hopefully, they will. Because hand-drawn animation is still just as impressive today as it ever was.

(All event photos and video courtesy of Brett Thompson).