Posted by David on Feb 3, 2011 in Feature Articles | No Comments 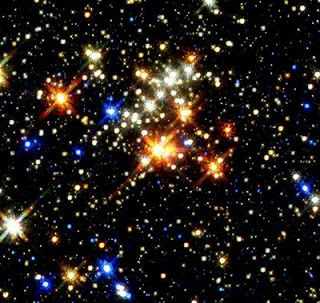 The longer I’ve observed the animation scene, the more I’ve come to notice that our art-form’s past achievements are usually applauded at the expense or at the underestimation of the great work that’s being done right now. I don’t think this happens for any personal or malevolent reasons, but simply because the past is easier to analyze and decode. Old works are fixed in time and the intervening years have a way of creating new appreciation as well as the opportunity to give long over-due attention to the individual talents that contributed to the works. The only draw back is that we don’t celebrate the great works being done today with the same reverence and respect. So, I thought I’d try to take my own advice and throw the spotlight to some of today’s generation of talented animation artists working in the New York area. Happily there are far too many talented folks to fit into one post, so we’ll have to consider this “to be continued…” 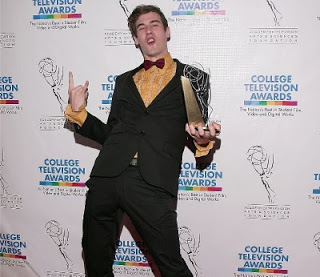 The dapper Ross Bollinger accepts a prize for his SVA thesis film Hook, Line and Stinker at the College Television Awards.

A member of my SVA class last year, Ross was that rare student who made more than one thesis film in a year. In fact, he made more than eight, and they were all GOOD. A man with creative energy to spare, I first met him when his jug band preformed a song at John R. Dilworth’s memorable December 2009 ASIFA-East event. Recently I had breakfast with Mike and Tim Rauch and they made the good point that it’s asking a lot of any animation artist to be able to animate, design, color, write, storyboard, produce, and direct their own filmsâ€“â€“because, how many of us have ALL those skills? Not many, is the answer, but Ross Bollinger is in that camp. I’d put him in the “one to watch” category. Check out Hook, Line, and Stinker, and see what I’m talking about. 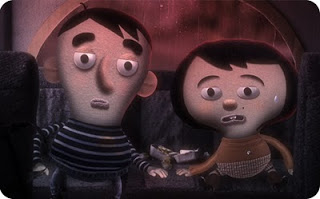 A still, and self-portrait, from Tiny Inventions’ award-winning film Something Left, Something Taken.

As proprietors of their own virtual animation studio, juggling professional and indie projects, everything they tackle seems to emerge with a personal stamp. For example, you see the same loving attention to detail in their latest indie short Something Left, Something Taken, that you see in their commissioned videos for They Might Be Giants, such as Electric Car. Max and Ru, much like the stop-motion animator/director PES, are making lush and cinematic animated films that only artists or artist-run studios could create. In contrast, a studio run by business-people usually make product to fit the bottom line, and end up creating work that reveals the limitations in budget. You don’t see any of that “holding back” in the work coming out of Tiny Inventions. Instead of seeing production short cuts, you see the joy of animation, the joy of creating itself. In the last ten years budgets got smaller for most everyone working in TV and Web-based animation, but Tiny Inventions’ use of the efficient, modern, and cost-effective virtual studio along with their considerable artistry proves that it doesn’t have to show on the screen. 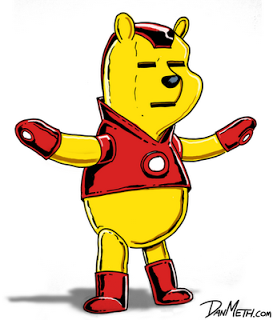 Dan Meth Posted this illustration on his site, with the caption: Have you ever noticed that Iron Man and Winnie the Pooh both kinda rock the same outfit?

Self-made man, mural painter, cartoonist, Web animation creator, Tumbler junkie, and savvy satirist of pop culture from the 1970s-to-today, Dan Meth makes it seem natural to plant his feet in different worlds. He’s an old-school illustrator/cartoonist scribbling out sketches in home-made sketch books, who happens to use Tumbler, a personal Web site, and outlets such as collegehumor.com as the drop zone for all those raw ideas. I can’t think of anyone else who has made so much original animated content for the Web AND gotten paid for it, all the while working under 100% creative freedom.

Talking to my SVA Animation Career Strategies class recently, Meth revealed some of the secrets of his success, including how he chooses his pop-culture targets: “I wouldn’t spoof Harry Potter because I don’t know it. I’m not into it. You have to like what you’re spoofing, you have to be into it.” While Dan has a very laid-back demeanor, he’s very disciplinedâ€“â€“demonstrating his focus by posting an original cartoon image or gag on Tumbler every day at 10:45 am. This way he attracts thousands of viewers to his work everyday, as his friends and fan base repost his work, spreading it to their networks and so on…. While he’s scored amazing success with his witty cartoon series for Frederator (Meth Minute 39) and an on-going series of shorts for college humor (check out this inspired short), he also has his eyes on longer-form projects such as books, TV series, and features. With his mix of talent, ambition, and marketing savvy, I have no doubt he’ll succeed. 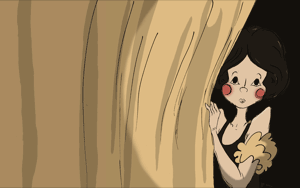 Another alumni from my SVA class of a few years back, for someone so new to the scene, Lisa LaBraccio has already had a checkered career. She was selected by the French Embassy in the United States to represent her school and country during the “PRIMN” (First International Digital Media Meeting), sponsored by French embassies all across the globe in 2005. It was at a reception/press conference held in her honor at the French Embassy that I first met her. How could anyone not be impressed at this high-level of accomplishment achieved a year before graduation? Lisa’s thesis film “Sideshow” was an elegant and well animated tragic love story, the kind of sensitive film that many of us animation instructors wish their students would attempt.

Before graduating she was already working for master indie animator Bill Plympton, and stayed on his staff for the next two years. After leaving Plympton’s she landed back at SVA, employed to help manage the animation department, and serving as a mentor to many a student. LaBraccio recently left SVA, heading to her next adventures. Based on her most recent foray in animation, co-producing the ASIFA-East Animation Festival 2010 Best in Show film, “Backwards,” a collaboration with Aaron Hughes, we can expect to see amazing work from Lisa for years to come. She’s just getting started.