Posted by dayna on Apr 2, 2012 in Feature Articles | One Comment 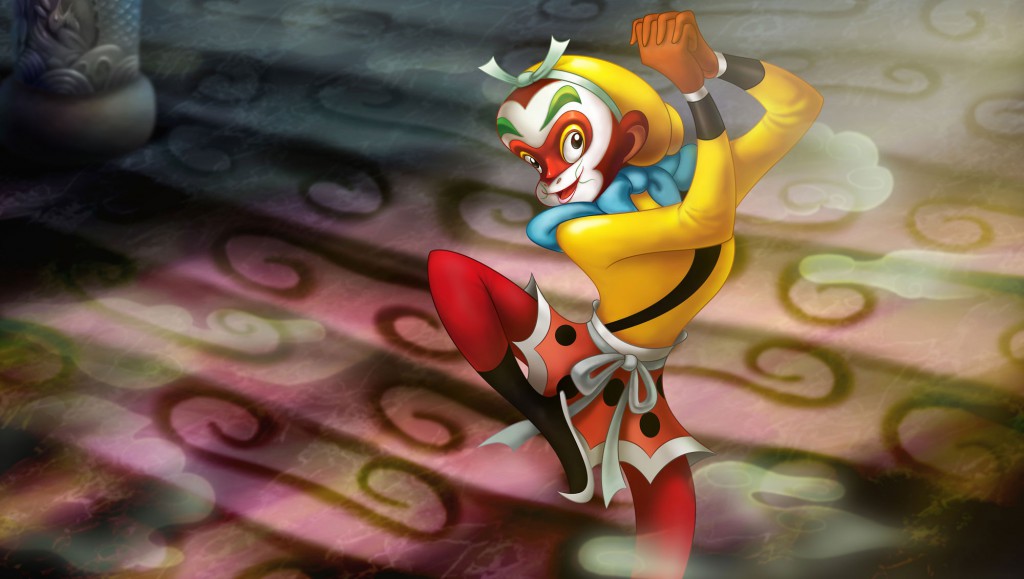 The New York International Children’s Film Festival added several surprise screenings, and I opted to buy a ticket for “The Monkey King,” so I could enjoy a nice 3D movie without the hassle of having to help other people.  I love being a volunteer, don’t get me wrong, but I decided to cut through the moral red tape of the situation by just putting some money down.  Also, have you ever sat in the seats at Walter Reade Theater?  Anyway, the movie that I expected to be a fun useless romp turned out to be a National Chinese Treasure and there was a Q&A with imported directors to boot.

“The Monkey King: Uproar in Heaven” [re-translated from 大闹天宫/ Dà nào tiān gong / Havoc in Heaven] is a remake of the classic 1960s movie.  Wan Guchan and Wai Laiming were two of four Chinese animation brothers who created China’s first feature length animated film “Princess Iron Fan” (1941).  They were inspired by the recent release of Disney’s “Snow White” and the Wan brothers started to plan production on “The Monkey King.”  Unfortunately for them, history got in the way.  It wasn’t until after the 2nd Sino-Japanese war and the Chinese Civil war that they were able to eventually finish the movie.  It was the last animated feature completed before the Cultural Revolution.

“The Monkey King” is a beloved film of many people, and the old crappy version is on YouTube.  Surprisingly, I can’t locate an official website for the new film, or the old one, and IMDB isn’t really caught up with it either, but these are not real concerns.  The important thing is this: the film was converted into 16:9 HD 3D!  It was already in color but now its FULL BLAZING COLOR.  There were audible gasps of delight during the first opening tracking shot through the kingdom of heaven.

A brief synopsis: Sun Wukong the Monkey King is having a gay old time with his cute little monkeys; they run around in trees eating fruit and practice ninja skills.  Sun wants to show them how it’s really done and in an exorbitant display of swordsmanship he breaks his favorite sword!  An old monkey man tells him he could probably get a better sword next door at the Dragon King’s house.  Sun visits the Dragon king and ends up taking the best weapon ever, the As-You-Will-Cudgel (which I recognized from Naruto…).  The cudgel also happens to be the source of peace for the Dragon Kingdom, but Monkey King doesn’t care because he is all-powerful.  So the Dragon King decides to sue him for stealing his cudgel, and takes him to court with the Celestial Emperor.

The rest of the film follows the Monkey King, as he foils the Imperials Court’s attempts to subdue him with their meaningless human jobs and titles.  The story is a strong frame for intricate character design and an animation style that is foreign to the American Eye.  The animation is heavily influenced by Beijing opera.  The key poses are stylized ritual/dance positions.  Hundreds of years ago someone decided what a flying pose was, or a pose to balance on a flower petal, and these positions were animated with a few slight adjustments.  It made the Monkey King move with a certain grace that I couldn’t quite place until I just decided the film was part-ballet.

The best part of the movie was the battle between the Monkey King and Nezha.  It is a battle of wits, weapons and transmogrification.

After the screening there was a Q&A with the directors Su Da and Chen Zhihong.  They were expressly flown in from China to the festival to talk!  Unfortunately, they only had time for a few questions, since everything needed to be translated into Mandarin.  One woman asked the directors why they made a movie in which the Monkey King seems fun and lovable when every story SHE’S heard of says the Monkey King is a terrible horrible animal.  The answer is… that’s how the original film was written, so they don’t see why they should change it now.  I was lucky enough to ask a question: “Do you believe in the story of the Monkey King, and did he drive you to become more passionate animators?”  The answer to that was… these directors are fan boys and girls!  Otakuuuu.  They just loved that old movie so much that they worked extremely hard to create a spectacular new version for today’s audiences.  Even as a 2D film, it is easy to see how millions of kids today can fall for the Monkey King.

When I first learned that it was a restoration (after the screening) I thought briefly about Bill Plympton’s restored McCay film.  Were there angry Chinese nationalists who didn’t want the movie restored?  I also thought about “Crack Sunflower Seeds” by Wang Po.  Wang Po made a political web-animation that was obviously about Ai Wei-Wei’s arrest.  Wang Po ended up being censored and feared for the safety of his family.  “The Monkey King” is a story about not letting yourself be defined by authority.  A curious concept to be revived in modern China, but perhaps it is a sign of Hope and Change.  Isn’t it amazing how great animation can inspire people, and nations?