Posted by Tristian on Feb 12, 2017 in Uncategorized | No Comments

The 6th avenue theatre is a buzz.  #Snowstorm is trending in New York City.  I can hear animators in the audience talking shop, about how many storyboards were done that day. Everyone is excited for director Chris MCKay to come out after the screening of The LEGO Batman Movie.  The closer we get the more everyone talks until the Warner Brothers show finally begins.

“BLACK…all good movies start with black..” Batman / Will Arnett (Arrested Development) breathes heavily on the beginning of the movie, kicking things off with high camp and meta-theatricality.   Batman is the undeniable hero of this movie, as demonstrated by a kick-ass heavy metal ass kicking of almost every single villain in the universe.  “All 78 years of Batman are here,” said McKay, “something you can only do in animation.”  Which explains the appearances of the Condiment King and Professor Pyg. 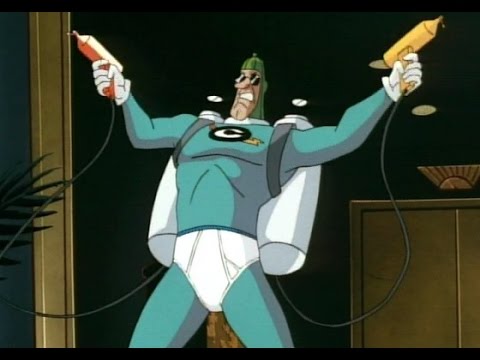 McKay describes it as “the 3rd act of someone else’s Batman movie,” with a big song.  But this isn’t the 3rd act.  As our expected timeline is reordered, we run over into scenes we weren’t meant to see.  Batman wrapping up the day in his giant LEGO Batcave… going through the motions, making dinner for one…. A strange stillness settles over the room as Batman hits 20 minutes on the microwave instead of 2 and then fixes it.  A frontal shot of Batman, microwave before him, it’s light repeatedly striping across his cowled mask as it bounces off a rotating lobster thermidor and into a dark cavernous kitchen.  We almost got the whole 2 minutes in that scene.

By now it’s clear that something is going on with this “superhero movie.”  McKay said that he wanted to make something like “Jerry McGuire directed by Michael Mann with lots of jokes in it.” He emphasized that “you know Batman has that 2nd act; you know where it’s going to go.”  The movie has gone off the rails, but the rails were set by many movies before this one.  “In some cases we know these characters better than our own family,” and Batman’s loner/savior complex is no stranger.  McKay plays Barbara Gordon (Rosario Dawson) against him, criticizing Batman’s inability to change (after 78 years!).

All the camp exists alongside the Christian Bale movies.  In a 2 1/2 year production, with 90 minutes (Warner Brothers really “really” really likes 90 minute movies) Chris McKay said they were “under the gun to get ideas out as quick as possible.”  “It’s amazing the kind of things you end up talking about at 2AM and Reel 5 has to get to international in the morning.”  Voice over can express that one idea about a character.  In the LEGO Universe, people shoot guns by shouting “Pew! Pew!” at the same time.  Ralph Fiennes (Alfred) came in for his lines, and ended up riffing a whole string of machine gun noises that made it into the final mix.  He was laughing that day, because he had just come from performing Shakespeare’s Richard III.

One of the movie’s surprising superstars is SIRI, the iPhone’s AI assistant.  Warner Brothers had hoped to include SIRI’s voice in the first LEGO movie, but things did not coalesce until now, which was for the better since SIRI did a great job emphasizing Batman’s loneliness.  But voice over isn’t just all Hollywood.  Some of the animator’s scratch tracks wound up in the film as background noises.  There was so much background action that many animators acted out their scenes and recorded their own dialogue.  And for one shot, a giant room was rented out to record all the people and actors improvising their group scene together.

The LEGO Batman Movie also represents a new development in LEGO animation.  McKay really had to “sit on the animators” after the 1st LEGO film… The LEGO Movie, 3 years later in 2017.  Everything here was designed out of the iconic bricks, with ‘few cheats as possible.’  The material doesn’t squash and stretch here, and McKay briefly described ‘shaving down the neck ridge’ in animation (whatever that means.… ) One of the first shots of the movie includes a highly dramatic view up of rain hitting a giant airplane. Water drops bounce and steam off in a way I didn’t know was possible in such a cheerful little LEGO world (more like Agents of Shield).

The LEGO Batman Movie had to progress beyond your average thesis-stop-motion film, and many stop motion animators were indeed hired because the CGI rigs were so rudimentary (…considering LEGO people).  There were many great touches in the animation, such as Alfred’s bald dome quivering in fear during one close-up.  I particularly enjoyed the tantrum Batman throws when Alfred tells him he has to go to the charity ball.  Simple cutting back and forth between the two talking, except Batman is backdropped by a huge hall with a giant fireplace and staircase.  Every time we cut back to Batman he is further away, and flopping around to “no no no!”… literally flopping his body around in impossible flips that look more a child handling a toy, or an anime character freaking out or a puppet raging.  A possessed body filled with humor.

Chris McKay wanted to make more of a Batman movie than a Lego Movie. The LEGO Movie cast ‘a long shadow’ and he wanted something like The Life Aquatic with Steve Zissou.  So when he got the green light it was ‘off to the races,’ building the opening scene while the script was being written.  “Caps off to my crew,” McKay thanked, “who took longs hours away from family, to make a movie about family.”