The Viewseum is back up and running!

Our first entry for the new season comes to us from Kristen Chiappone and Chris Conforti. The ASIFA-East 2012 Signal Film, made especially for ASIFA-East’s most recent animation festival. 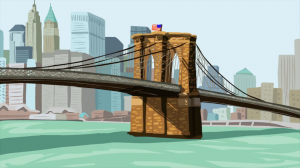 Opening with an image of the Brooklyn Bridge, with Manhattan in the background, we are taken under the sea…well technically, under the Hudson River, but who cares? Anyway, in a world only animation can present to us, a Mermaid swims around and finds a buried film reel (still nice to see those in this digital age), and excitedly takes it and swims across the ocean floor. Her excitement catches the attention of all her underwater friends, all of whom follow her. The film is then conveniently projected with the help of of a swordfish, a squid and an anglerfish. All of the underwater dwellers anxiously sit down to watch the Mermaid’s presentation of what appears to be the 43rd ASIFA-East Animation Film Festival. How nice. 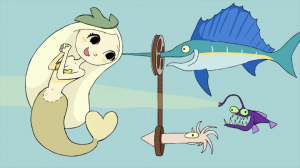 Under 30 seconds, the animation and design are beautifully illustrative. The underwater dwellers are cute and appealing. And anyone with an interest in marine life should have fun pointing out the various types of fish and sea mammals. Adding to the production is music by Keith Chiappone, Kristen’s brother. Suitably, the score is a ukelele jingle, adding to the pleasant nature of the clip. 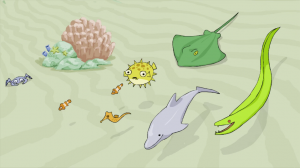 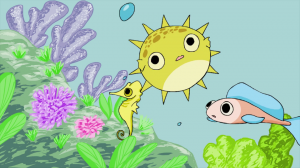 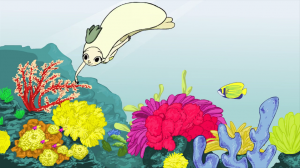 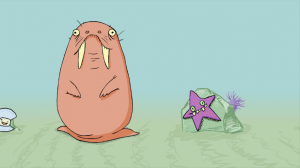 Production wise, something that really stands out in this clip is the color palette. Rather than a mostly blue and green palette (how most underwater footage looks), Chris and Kristen have rendered the clip with an assortment of lush colors. Instead of highlighting the ocean blue (or river blue), the colors of the various sea creatures are more apparent and distinctive between each character. 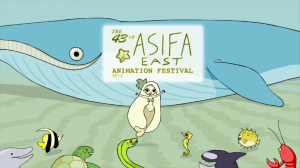 Its nice to know that in an age where dark and edgy are becoming the norm of animation, we can still succeed in presenting something that is as pleasant and warm-natured as this short clip. Well done, Kristen and Chris!