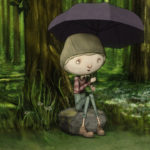 ASIFA-East and the Norwegian Consulate General are proud to present a spotlight on Norwegian Animation!  This year Odd Is An Egg by Kristin Ulseth is being screened as part of the TriBeCa Film Festival, and is produced through Norway’s largest and most prominent animation studio, Qvisten Animation. It is just one of several international “Animated Shorts: Curated by Whoopi Goldberg,” a […]