One does not simply walk into the TriBeCa Film Festival, as I found out approaching the School of Visual Arts theatre in Manhattan on April 22nd, 2017.  A bustling crowd stood around a pop-up red carpet and lines stretched down the block. “Well, clearly Whoopi is very popular,” I thought, and briefly tried to catch a glimpse of the action. I was invited to attend “Animated Shorts Curated by Whoopi Goldberg” by a participating Norwegian director named Kristin Ulseth. Kristin produced, co-wrote and directed Odd Is An Egg (Odd er et Egg) and it was the North American Premiere. We had been brought together by the magic of ASIFA and Signe Baumane (Rocks In My Pockets). Signe had mentioned that some Norwegian animators were coming to NYC and were looking to meet some New York animators, and could I please put a meet-up together, since I was an ASIFA East festival co-chair and ‘a party guy.’ Sure, why not? When life gives you lemons, it’s time to make very difficult lemonade. 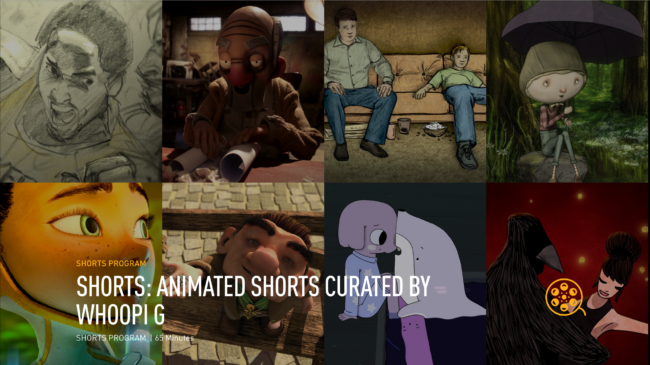 Odd is An Egg premiered to great success and went on to win TriBeCa’s Best Animated Short. The “Norwegian Animated Spotlight” (brought to you by ASIFA-East and the Norwegian Consulate) was also a very successful after party, held mere blocks away from the festival’s filmmaker’s party on Sunday night 4/23 at the M1-5 Lounge. We’d like to thank the consulate for their generous support, and it wouldn’t have been possible without Kristin Ulseth. Having been brought up by a mother who actively participated in the Parent/Teacher Association and knew how to decorate a table, I was excited to see our party strewn with Norwegian chocolates, film posters, hand crafted eggs and even little jars of honey. The free raffle gave away tickets to TriBeca’s animated short screening, as well as copies of the original Norwegian book that the film was based on. Our ASIFA DJ Christi Bertlesen spun toons until a reasonable hour, and we had an open bar. Many ASIFA East members, TriBeca Festival attendees, local animators, directors and producers attended. Check out our photo gallery from that night! 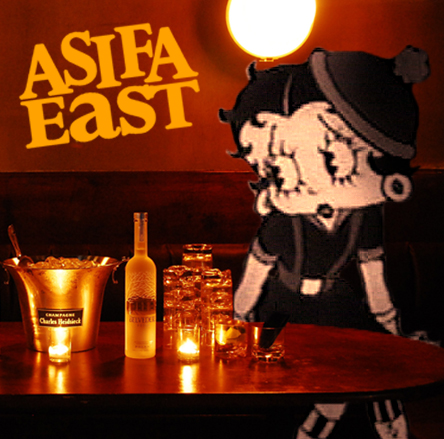 Kristin Ulseth develops television, film and games for children at Maipo Films, and created Odd Is An Egg with Qvisten Animation, Norway’s “most renown and prestigious animation studio.”  Odd Er Et Egg is a children’s book written and illustrated by Lisa Aisato, “perhaps most famous for her illustrations of Tambar, a series of books written by Tor Inge Bringsværd,” and her weekly magazine illustrations in the national newspaper Dagbladet. Kristin normally works as a producer for feature length live action and animation, and this was the first film short she directed in about 20 years! She wanted to make this short because it “had a striking story that can appeal to everyone.” ‘Everyone can feel very fragile sometimes,’ and ‘the story tells that in a way that children can adapt to very easily.’ 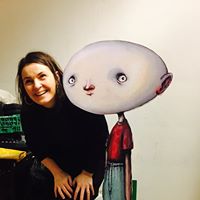 It works on a simple level for children, but also in a more complex way for adults. “You can put a lot of interpretations into it.” The style of the film is very much based on the illustrations in the book, “melancholic but beautiful,” and were a challenge to transfer to film. So they decided to make the short a combination of 2D and 3D animation (Maya, and TV Paint from Sparkle Animation in Portugal), crafting the 3D characters ‘as 2D as possible,’ even going so far as to render them on twos (meaning each rendered image last for 2 frames). “It was a challenging process,” Kristin said at the premiere, “but we had good fun making it!” 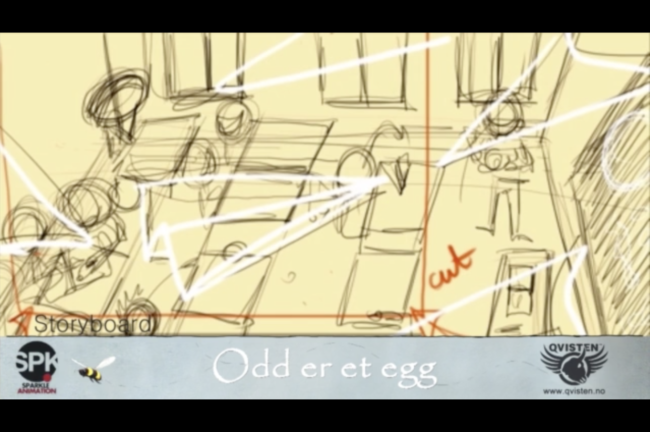 Click here and scroll down to see the production process from storyboards to final render.

Whoopi Goldberg was the perfect host, and cooly handled the ten different filmmakers who came onstage for a Q&A after the screening. (Kobe Bryant, from Glen Keane’s Dear Basketball, graciously chose to remain in the audience). Whoopi pointed out that many of the films protagonists and heroes turned out to be women, either taming the beast, helping a friend, or being the oldest person in the world. 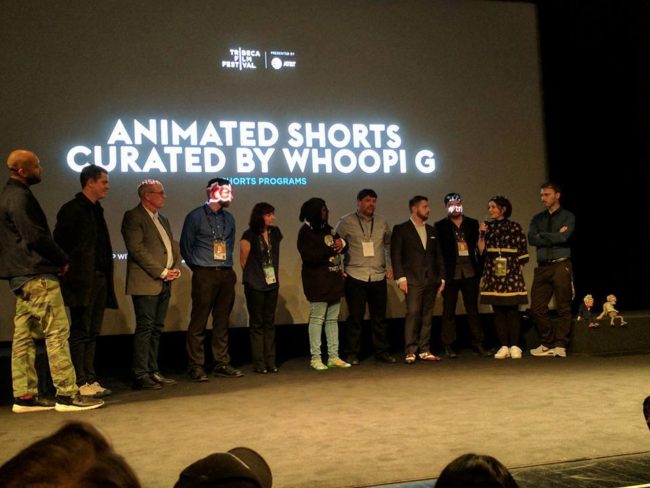 Whoopi Goldberg (center, jeans) and Kristin Ulseth (right, polka dot dress) along with many other talented filmmakers from the show, such as Glen Keane and Dmitry Milkin. Img Src: Odd Is An Egg.

“None of the women looked like anybody else,” Whoopi said, “they were all singular looking, and I want to be thankful for that because it’s wonderful. And to see in Odd this rainbow of children running around, is great, because we don’t get to see that a lot. I’m not sure why, but I’m sure it’ll change, because artists are starting to look at themselves and say ‘I’m putting myself in there.’ And that’s the great thing about art. If you are not a basketball player you become a basketball player, because you learn the lines and the flow of what it takes. If you are not a kid who’s head is way too big [Odd] but you’ve been there, then you understand that sometimes it gets harder, but that’s not a bad thing. There are so many great messages.” 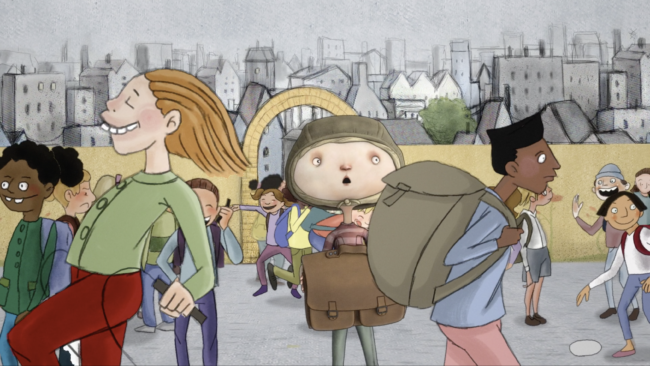 One of the first audience questions asked was “How do we get more shorts?” I never really thought about it, but as a native New Yorker I should check my privilege and realize that maybe not everyone in the country has access to independent short film.  “If you ask for things, people will try to make it happen,” Whoopi replied.

“There’s no reason why we can’t assist in that, because TriBeCa has wonderful reach.” Whoopi continued. “Perhaps if we start to explain to people, that people would like to see something before everything gets blown up. [North Korea was in the news cycle]. You need it, you need to go see a good movie, you need to go see a good short, because a short puts a smile on your face. Or it makes you think about thing, or it just makes you go ‘Hmmmm,’ and that’s never a bad thing.  And it keeps our brains juicy, which as you know, I’m not saying anything but, we need that right now, we need juicy brains, we need our brains to function, and so perhaps we can help do that.”

Odd is An Egg is currently programmed at Animafest Zagreb, Busan International Children’s Film Festival and Sarajevo Film Festival, and will be promoted at the MIFA market in Annecy, so I’m sure we will continue to hear great things about the film, Kristen Ulseth, Qvisten Studios and all of Norwegian animation.  Ha det bra! 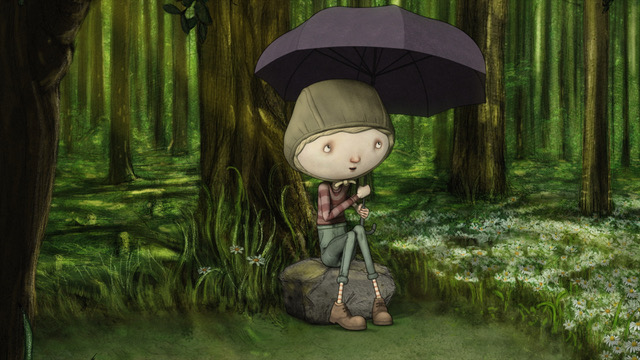 “Odd is an Egg” Synopsis

Once upon a time there was a boy named Odd who had a strange egg shaped head. Every night he dreamed of the terrors that could befall his fragile physique and wraps his bedposts with cushions to be safe. Odd is a 3d animated character in a 2D storybook world, with a water colour palette and very fine subtle shades of desaturated color, the paper heavily grained and scraped with fine pencil marks. Odd is so timid that he walks his training-wheels bike everywhere and doesn’t even ride. The schoolyard is filled with a diverse array of excited children, who run around playing all sorts of games. To their credit, they do invite Odd to join them, but Odd is too scared. The kids’ 2D heads are small, but their mouths are huge and smiles wide with bright teeth. Odd’s face is big, but his features are tiny and barely sunken into the surface of his skull… pale as a Goth with shadows of worry around his eyes.

Odd spends each day withdrawn, wearing a dumb tea cozy hat as protection, and doodles his fears. He carefully navigates the steps of the school, stepping from shadow to light in a way that almost transforms the story book into a pop up book. If only he could delight in the rich beauty of the garden shrubs, rendered gorgeously in thick paint and thin pencil, by the books author Lisa Aisato. Fortunately, a strange girl has noticed him. We only catch glimpses of her hands, and hear her strange buzzing laugh. She coaxes him out of hiding in the bathroom, transforming his fear based doodles into something more magical. Odd finally meets the girl in a forest.  Her name is Gunn, and she jumps high in the trees while Odd cowers on the ground. Gunn is dressed up as a bee, with fat rosy cheeks and round cow eyes. (This is a great school where your kids can attend in costume). Gunn stands in warm-toned and round chubby contrast to the skinny pale Odd. Her passionate energy and belief in being a bee starts to have an effect on Odd, and they soon fly off in their imagination, pollinating giant daisies and laughing in the fading sunlight. Odd even forgets about his head and hat, but not for long. An owl hoots and Odd is startled, but Gunn simply says, “I’m not afraid of the dark either,” which is comforting and wise beyond her years… they make plans to hang out again the next day.

Now Odd’s time is filled with happy thoughts and he races after school to meet his new friend, but she is nowhere to be found, in the forest of tall solemn elms and cartoony pines. Odd returns home to his mother… who is a big lazy chicken engrossed in her own magazines and troubles. Odd finds some honey and realizes it would be the perfect gift for Gunn. He heads out into the stormy night to find her, walking his bike through the rain. The cobble stones streets are cold and hard, reminiscent of European cities like Krakow. Finally he finds her house.  “I had a dream about you,” Gunn says, and Odd blushes so hard steam comes out from under his hat.  Gunn has been grounded for eating the neighbors flowers, so Odd climbs up the brick wall to give her the jar of honey. Fate cannot resist temptation, and so Odd falls off the wall and cracks his head open.  But it’s a happy ending, as love has ‘boiled his head,’ and Gunn lovingly brushes off the flakes of shell from his cheek.  Odd and Gunn ride off triumphantly on his bike through the forest, into a new city full of possibilities. 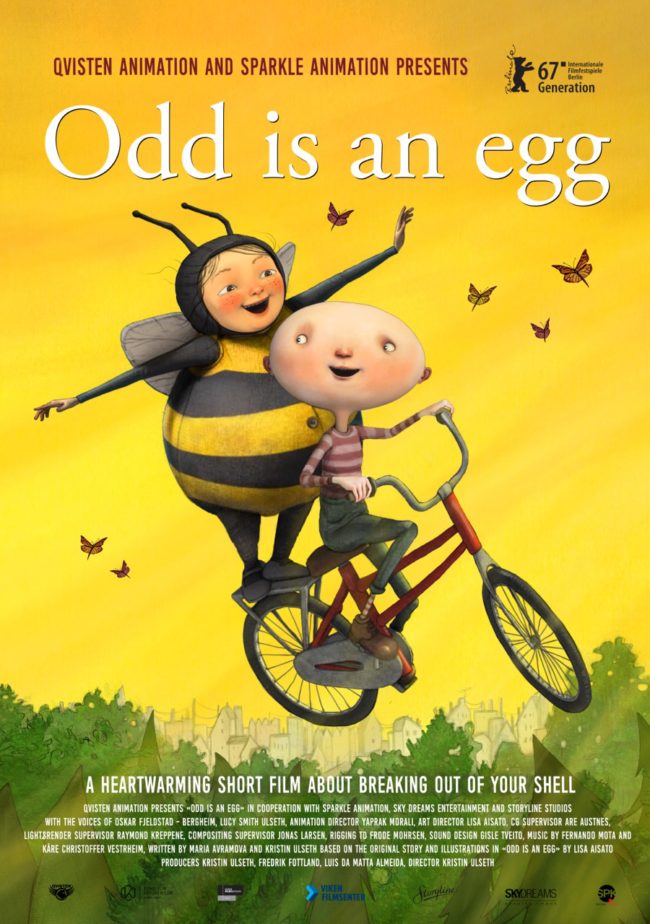 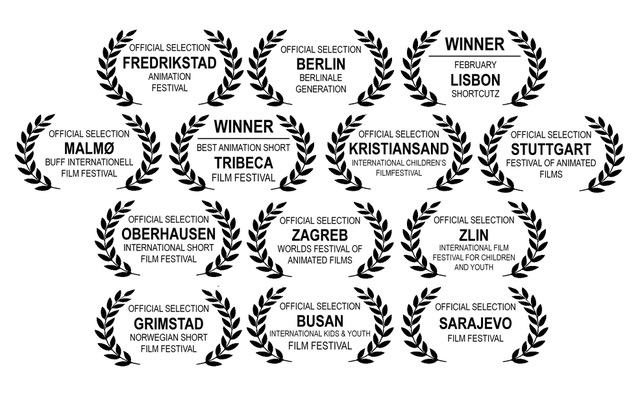