Posted by Emmett on May 18, 2012 in Feature Articles, Viewseum | No Comments

As ASIFA-East goes on its summer hiatus, the Viewseum wraps its first full (ASIFA-East) year on the aNYmator. And here, we have both a good way to wrap up the first year, as well as a suiting lead-in to the summer.

To say Bill Plympton is a key-figure in New York animation is an understatement. His presence looms large amongst not just New York animation, but the world of independent film in general. He has been called the most successful indie animator of all time, and the Viewseum is pleased to feature his work for the first time.

Summer Bummer is a short ditty in the vein of Bill’s classic Plymptoon shorts, commissioned by Showtime. Here, we have an imaginative swimmer wondering about what could be in his pool, and discovering that the craziest notions are sometimes true. It demonstrates Bill’s distinctive drawing style, rendered in colored pencil, and a sharp and (literally) biting visual gag. 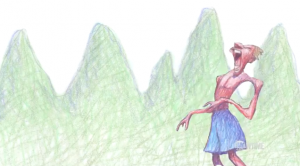 At the moment, Bill and his crew are in full production on his next feature-lenght film, Cheatin’, for which there is a Video Blog following the progress (posts are every two weeks, and definitely worth a look). Also, look for Bill’s latest “how to” book, entitled Make Toons that Sell Without Selling Out!

Enjoy the summer, and always check the pool water before diving in!