Posted by Tristian on Jan 24, 2013 in Feature Articles | No Comments

On Friday the 18th, the Museum of Moving Image hosted a show called “Special Effect” by the video performance artist Peter Burr. I was attracted by their description “involving laser beams and a hacked Kinect camera” but if there were lasers I missed it, and the Kinect must have had a subtle invisible use. As I wrapped up work for the day, I noticed there was a trailer for the piece, and I’ll be damned if I knew what to make of it. I don’t usually go for abstractions, other than the occasional music video, commercial short, or render-experiment I find on various animation blogs, and I was apprehensive that I had made a mistake getting tickets in advance.

But IT WAS NO MISTAKE. 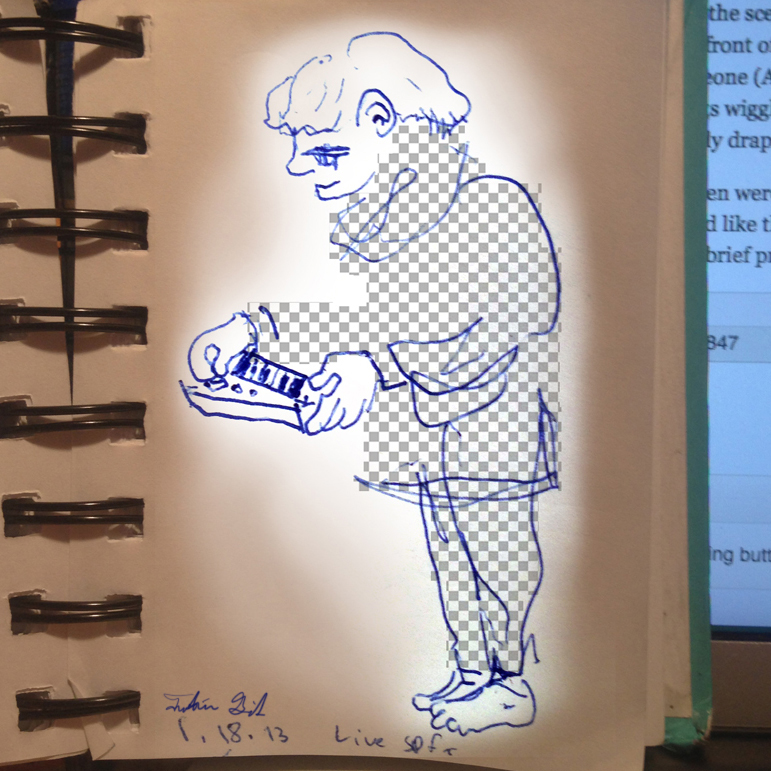 I surveyed the scene as I sat in MoMI’s geodosic blue theatre. Underneath the screen, there was a normal podium on the far right, then a laptop with a green placard in front of it and a mic, further left there was another little table with electronics, and way on the left a grey fabric skate-board ramp type thing with a hole. Someone (Peter) was setting up. He slightly gave the game away by inserting himself into the hole before the show started, but it was still fascinating with his legs wiggling out of it, looking like a transporter-accident. I noticed that 95% of the audience were young, fashionable hipsters, wearing the baggiest most artfully draped winter-clothes imaginable.

On the screen were playing a few animation tests; or not tests, but pieces. To give you an idea, one was a simple modeled biped, waving about an arm with hair on it, but it looked like the modeler got the physics wrong because the hair just stuck out all over and didn’t fall… like the early Sully tests from “Monster’s Inc.” After some brief praise was given to the museum and Mr. Burr, the lights went down and the show began.

Black and white grid. (A la your default transparency background in Photoshop). Scaling in and out, humming, vibrating, moraying. Possible fractal shifts in overlaid grids. Digital grids combined with footage of a printed grid. Crop the sides to blue or green. Insert live feed of Peter’s face, POV the laptop, as he fingers the computer like a VJ. Eventually he starts intoning “inside” over and over again, and the cadence makes you think maybe he’s saying “side in” instead. The horizons go up and down. Other things must have happened. I smiled a lot, which is my go-to response for not knowing the appropriate reaction. Maybe I should have looked at other audience members. Eventually, I saw 2 small children escorted out of the theatre (too much abstraction?). I learned to relax and discovered I was enjoying myself. There were many tests of compositing. Water fell on marble slabs. Fingers were pushed in green goo, which surprisingly not used as a green-screen effect. The show features work by Cartune Xprez (which is a happening of animators co-founded by Burr).

The kids left at the point where the animated world turned into jitterly rendered men walking around in a live action forest (actually, it could have just been a bathroom trip).  A man in a poncho was asked what he saw in an empty bucket (his soul probably). His body flexed polygons randomly. I realized that these beings struggled to hang on to their corporeal forms. They dragged digital cloths that were textured with video over stone walls. I particularly liked that effect, after they projected a grid onto the cloth so you could see the distortions more specifically. In the jungle, Peter started proselytizing and distorting his voice, while playing a tiny electric piano with one octave.

I asked Peter Burr what it felt like to perform inside of a giant blue theatre.  He told me that he designed the show last summer with scalability and flexibility in mind, no matter the venue.  “I also knew that I had 2 really amazing venues lined up to premiere it: that outerspaceship cinema at MOMI and a drive-in movie theater style venue in the Australian bush called the ECOPLEX. These venues helped sculpt the form of the live show…. the set pieces and the staging. They are both so otherworldly… the drive-in theater space as a relic of the past and the MOMI theater as some nostalgic utopian future zone. Both great places to contrast the dystopian ruined future space pictured in SPECIAL EFFECT.”

DEW DEWW DEW DEEEEWWWWWW DEW! Cue a singular 80’s synthesizer refrain. Peter has crawled into the skate board ramp and disappeared. We are now looking at an animation that is a hybrid of the Czech “Fantastic Planet” and “Jem and the Holograms.” Russian Kosmonauts are exploring a planet with dino-monsters and talking Soviet-capitalist garbage through thick sexual innuendo. Alien pterodactyls kept trying to kill the Kosmonauts but Russian-Sylvester-Stallone saved the day. The lonely spacemen might have had sex with the “purple Kermit-things.” Overall, I thought it was great. Peter crawled out of the whole wearing a new outfit, patterned in a black and white grid.

The narrative portion put the rest of the show into perspective. “Special Effect” is inspired by Andrei Tartovsky’s “Stalker,” which is a film about two Russian agents who smuggle artifacts out of “The Zone,” which is a mysterious area that grants wishes. The Kosmonauts from “Special Effect” talked about how the alien world was evolving to kill them at any cost. The unstable puppet people from the live-action jungle scenes seemed more mysterious. Obviously the poncho-man was an alter ego of Peter, but what was his purpose in the jungle? If I were trapped in a jungle, unable to rely on the fixed composition of my limbs, and wary of illogical plant life, would I really wax philosophical about my existence?

“These are really good effects.” says the poncho man, looking at his hands. I agree.