Posted by Tristian on Jul 14, 2013 in Feature Articles | No Comments

Editor’s Note: I decided to write a fictional story about an actual screening I attended.  The event takes place in the fictional character’s life, but the animation descriptions are kept separate and are my own personal opinion. ~~~ 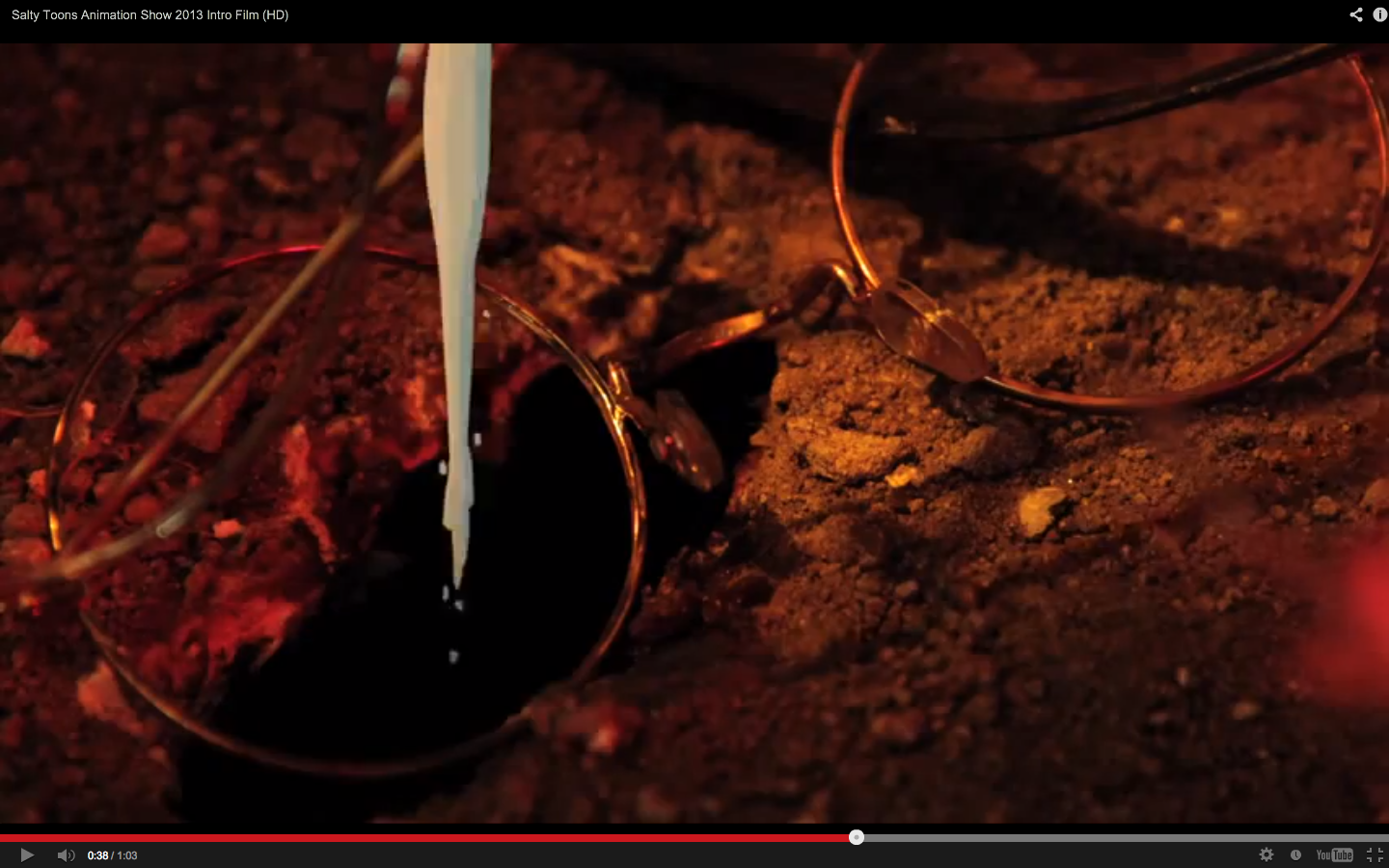 The curb was hard and cold, and when she ground her sneaker into the pavement it made a satisfying gritty sound.  She looked up from the ground at the grey sky; grey like blank, which was not comforting.  Mary Sue wondered how long she’d wait.  She had come early to Big Irv’s gallery in Williamsburg, and it was Sunday April 7th.  The area was pretty quiet.

Mary Sue was smoking a cigarette, and trying to decorate her jeans with cigarette burns.  So far she had made a swirl of holes on one bootleg.  At least Mary Sue thought it looked like a swirl to her, and wondered where it would go next.  She tapped her smoke.  “Where was Andy?” she thought.  Andy hadn’t been around in a long time, but now they would catch up.   She had suggested that they meet up for some cartoons and then hash life out over drinks. 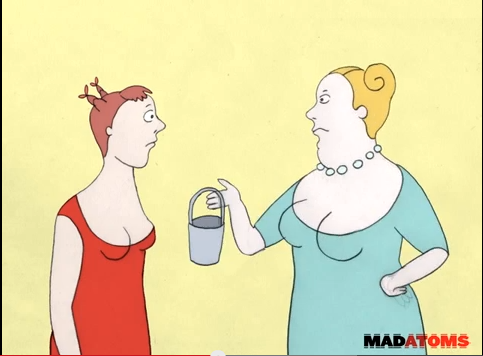 <<Where rrrr u?>> Mary texted.  She wondered what he looked like now.  She wondered if they still liked the same films.  What if he… didn’t get it, you know?  Sometimes Brooklyn humor was lost on people.  “Too Ironic.”  “Made in China… man!”  But the weekly email newsletter she had signed up for always suggested things that turned out to be awesome, so she trusted it would be entertaining.

She went back inside.  It was pretty cold.  Some people showed up with tacos.  Mary Sue wished she had a taco.  Instead, she got a drink.  $3 for a cider, beer or mixed drink.  There was a dog at the drink bar.  He smelled good and ruffed happily as Mary Sue scratched him behind the ears.  She took a sip of her drink, when her phone buzzed. “runnin late. start without me :(”  Andy.  Mary Sue sighed and walked to the main gallery room.  The crew had found chairs and cushions and couches of all types to make for a grungy, lets-get-down to business theatre.  She took a cushion, and the intro rolled. 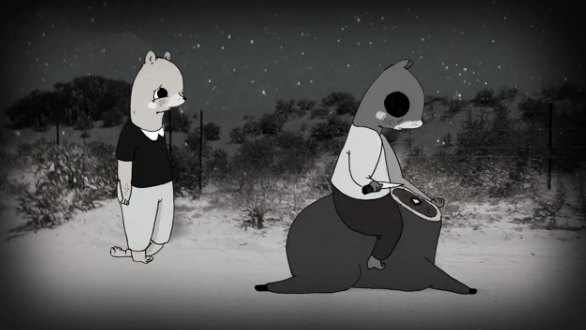 “The Event” by Julia Pott

The intro was animated by Peter Ahern, who worked with Big Irv’s gallery to present a screening night.  A remix of Grieg’s “Hall of the Mountain King” plays over cascading white goo, and reanimates a deer.  The title “Salty Toons” is embedded in the creature’s heart.

“Death Buy Lemonade” (2010) by Kyu-bum Lee is about a little girl who is a little too concentrated on making money.  Kyu-bum matches bold facial expressions of the girl with the immovable skull of death. 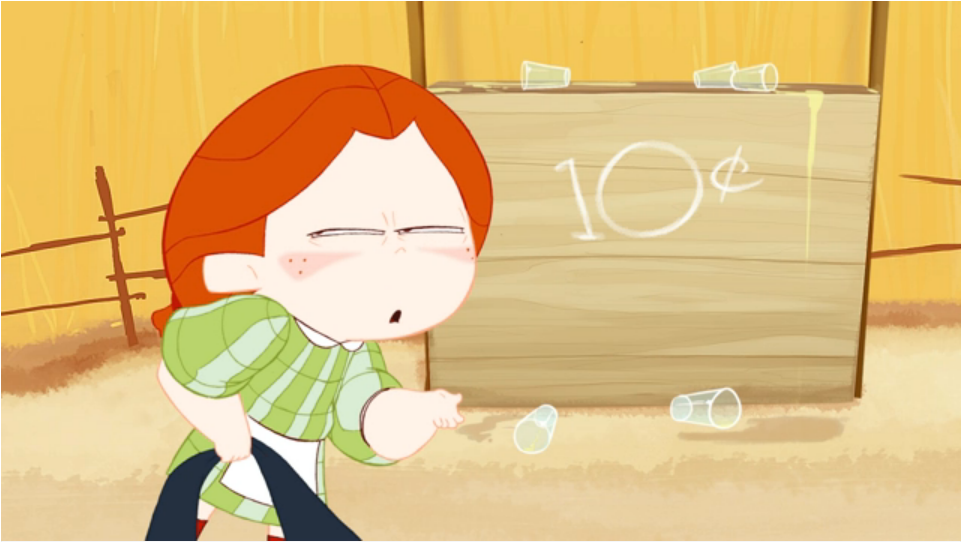 “The Sandman” (1991) by Paul Berry is a chilling tale of European legend.  In this version of the Sandman, he is a frightful blue monster with a penchant for eyes, like the Corinthian (by Neil Gaiman) The stop motion of the puppets form wicked shapes, as the characters walk and stalk across dangerously rakish camera angles.

“The Event” by Julia Pott.  An apocalyptic story of two animals in love, and how they use love to survive.  An effective blend of hand drawn animation tracked onto live action footage creates a gloomy atmosphere.  Julia’s images flow off the words of the narrator to create a disturbing scene. 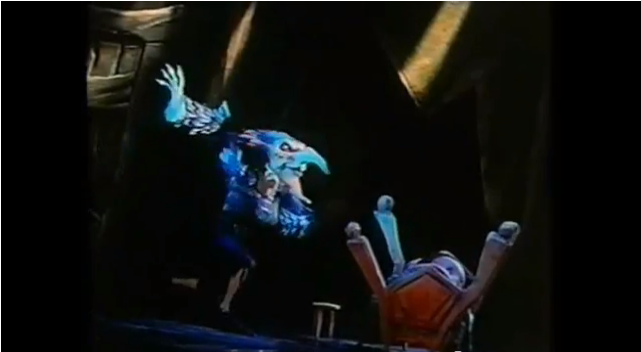 “The Sandman” by Paul Berry

“Teat Beats of Sex Episode 2: Juice” by Signe Baumane  Things get a little bit steamy in this helpful episode. But sometimes, you have to lay it out for people, or they just won’t get it.  This simple animation in an educational style works well with a strong leading lady.

“Leonard” by Michelle Brost.  He is a lumberjack, and he is a gorgeously painted and textured animation.  A simple conceit plays out between man and owl, who ripple and breathe smoothly across the backgrounds. 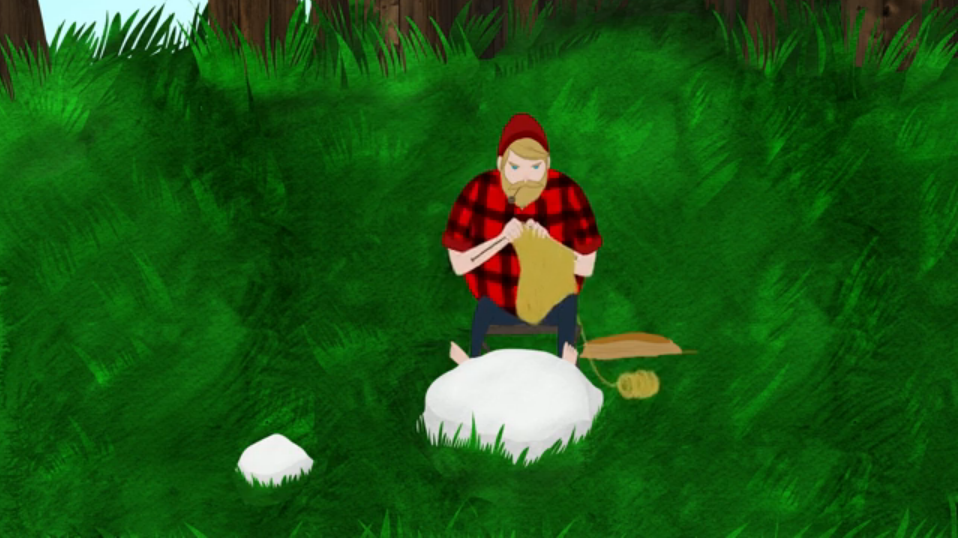 Andy probably wouldn’t get “Leonard,” Mary Sue thought as the lights flickered on.  There was a Q&A with the animators, and a lot of the filmmakers had come to see the show.  One guy was asking about “LGFUAD” by Kelsey Stark and inquired how much drug culture influenced the film.  Kelsey told him that she was more inspired by the poetry of William Burroughs than anything else.  Mary Sue could tell the guy wasn’t convinced, but her attention wandered.  Sometimes she chatted, but mostly she just stared at the walls.  It turned out to be the same situation at the Burnside bar.  Mary Sue felt real unoriginal staring at the bottom of her drink, while some girl nattered on to her about where to get good jeans.  “What happened to Andy?” she thought.

Her drink had a good smell.  One not frequently found in a cocktail, and she scanned the room while she struggled to place it.  She took a breathe and held it, and shut her eyes over her glass.  Maybe she should hit on that Peter guy, who emceed the screening.  What was that smell?

Mary Sue’s eyes popped open and she looked up.  It was Andy.