Posted by Tristian on Sep 28, 2015 in Feature Articles, Uncategorized | No Comments 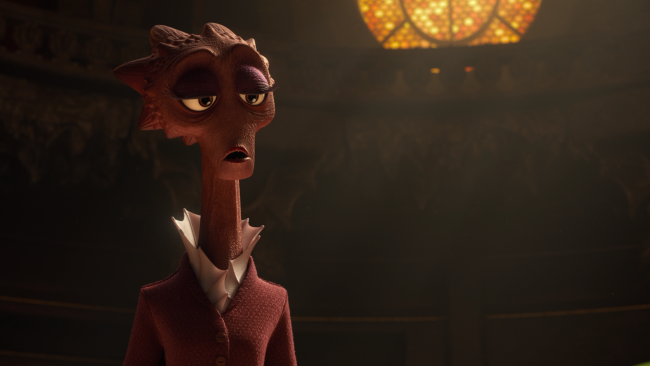 Monsters University represents many important firsts for Pixar. It was their first prequel, after significant shake-ups on sequel ideas for Monsters Inc, with Circle-7 Animation and Disney’s purchase of the Pixar company. It was the first Pixar film to use “global illumination,” a ray-tracing lighting style for 3d animation that accurately simulates lights, shadows, and reflections. It was the birth of “Presto,” Pixar’s proprietary software that plays back rough animation in real time so that animators and directors can make adjustments to the first draft of a scene without rendering. And it was the first time a Pixar movie used a techno track, with “Roar” by Swedish House Mafia. Let’s see what else we can learn about the movie from SVA’s former students. 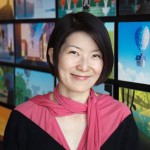 Before earning a MFA in SVA’s Computer Arts program, studying ‘time-based moving images,’ Ye Won Cho studied sculpture and visual communication in Seoul National University, in her home country of Korea. Cho started off with an internship at MTV-LOGO assisting on Daria, and as a intern/lighter at Curious Pictures. She recommends that students take internships to get exposure (and to give exposure). Cho also spent a short amount of time at Eyebeam right here in Brooklyn and just a year at Dreamworks and Shrek 2. Her thesis film Trilemma was nominated for a Student Academy Award (regional finalist) and screened on PBS’s Reel New York. With her diverse background, Cho believes her role as a lighting director is to direct the attention of the audience with lights and darks, and support the vision of the movie’s director. She also credits New York City for its great access to superb art, and to SVA for showing her lots of installation and video art. 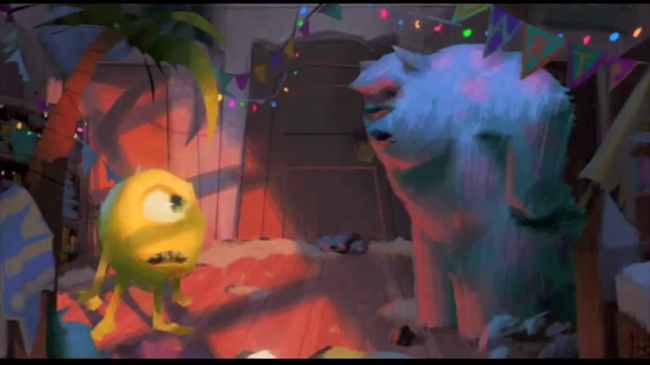 Lighting can create a subtle storytelling atmosphere. Regarding Mike and Sully, Cho says that the relationship between the two was played with “the choreography of shadows.” Since this movie was a prequel, they have not become good friends yet. The best way to play Mike’s and Sully’s friendship was:

“when they were fighting, one was in light and the other was in shadow… towards to the end, when they get together, they are in shadow or light together. We used trees and moved things around to create the look. … we used dapple shadows for transition.” ~ YWC

Cho also described a “dingy green” that is slowly introduced into the movie. It’s a color that makes people feel uncomfortable, and signifies a really low moment. The color becomes more prominent over time to build tension during the ‘reverse monster movie’ section of Monsters University. The scary human world that Mike and Sully run through is more black & white, lit with flashlights, and as the climax builds, the lighting becomes more dingy. There were deliberate choices made in ‘color metaphors’ to distinguish Monsters University from Monsters Inc. ranging from saturation levels, to monochromatic colors, and ‘emotional colors.’ [Editor’s note: a theme that would reach its eventual conclusion in Inside Out, which very specifically matches colors to emotion.] 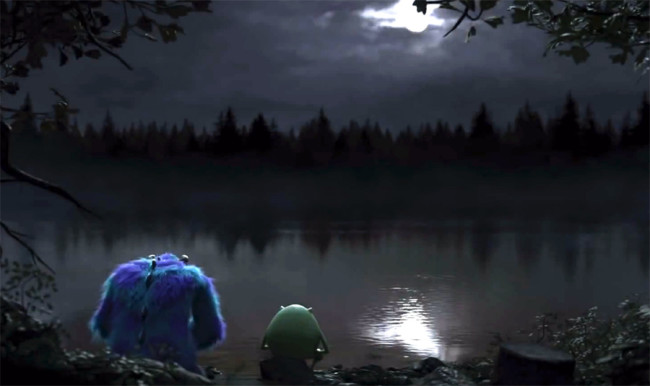 Mike and Sully in the Human World [photo source http://pixarplanet.com] 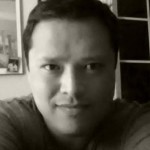 As a TD, Dayton works on sets, models, and lighting. After graduating SVA in 1998 with a BFA in computer art, he spent some years freelancing at various studios such as Curious Pictures and TapeHouse/BlackLogic. He even received an offer from ILM, but he turned it down because he is NOT a fan of Star Wars Episode 1. While at Pixar, Dayton was awarded a technical patent on semi-sharp crease modulation, which gives the modeler control over sharp edges.  Real world edges are never infinitely sharp, particularly when viewed up close (for subdivsion surfaces the sharpness value ranges from 1-10, where infinitely sharp is >=10). 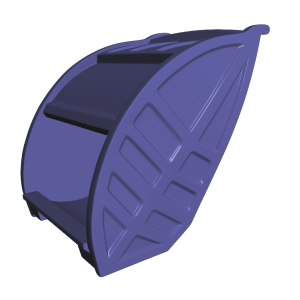 In Monsters Univesity, many of the buildings and sets were designed with subtle ‘monster faces.’ And within the architecture, many objects such as doorframes were weighted top or bottom heavy as trapezoids to accent various characters. For Dayton, the general shape and structure of an object comes easily, but it is the last 10% of polishing that is key. Again, the pre-visualization software Presto comes into play, making it easy for the director to lock down the best camera angles, and therefore directing the modelers to the part of the object that needs the most amount of detail. This came into play strongly during the Scare Games Tunnel Sequence, since while as a whole the tunnel structure was complex, details such as bricks or erosion only had to appear where the camera was pointed.   They always ask, “where can we up-rez the quality?”

When Dayton was working at Pixar, it didn’t matter what software people used, whether it was Maya, Mudbox, Modo, or Z-Brush, just as long as the end result looked good. And if, when you finally finished that model, the director decided the movie didn’t really need that scene, you don’t take it personally. It’s all for the sake of the story, and you still get a paycheck. 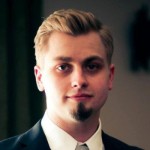 A native of Connecticut, Haniszewski started working at great New York studios such as Aardman Nathan Love and Framestore even before he graduated from SVA in 2009. At Pixar he was responsible for modeling props for main characters and for all ‘tertiary [character] hand articulation,’ amongst other things. Haniszewski incorporated Z-brush into the production process to speed up the pipeline. Apparently there were lots of challenges in Monsters University that required updates in technology, but the challenges of sculpting, modeling, and rigging believable creations is what he loves to overcome.

While he was at school, Haniszewski engaged in friendly competition with classmates to see who was the better artist, or the better modeler. When the teacher asked for a model of chess pieces, he made monsters (playing chess probably). He recommends that students constantly push themselves. The two years of fine art that SVA offered were very helpful, especially in a world where animation software changes all the time. Haniszewski currently works at Blue Sky as a Character TD, and co-teaches a class at SVA of advanced model rigging. His students are hungry… to learn! 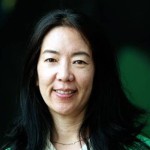 When you work at Pixar for over ten years, you get a little bronze statuette of Buzz Lightyear. Nancy Kato graduated from SVA’s graduate computer art’s program in 1991, and spent several years freelancing at Wild Brain Inc, 8 years on staff at Rhythm & Hues, and for one year at Pixar itself before joining staff. She has received a Visual Effects Society Award for Outstanding Animated Character in an Animated Feature Film (Cars – Mater) in February, 2007. Kato was born and raised in Sao Paulo, Brazil, and likes to visit her homeland every year. Outside of Pixar she has worked on Babe, the original Coca-Cola Bears commercial campaign, and Waterworld. She was an Animation Mentor, and teaches at the California College of Arts (as a visiting artist). Kato worked on the animation of Merida in Brave, and is animating on Finding Dory. In Monsters University she animated the 6-year old version of Mike Wazowski. 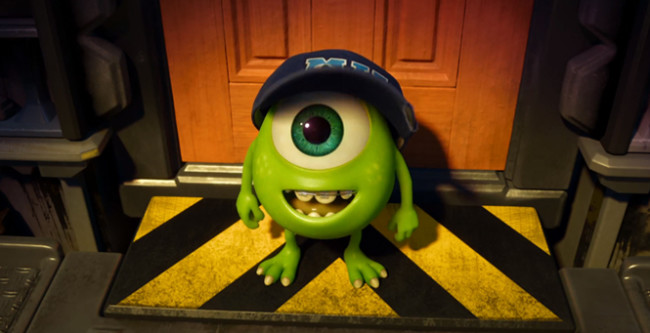 Kato believes that each new character animation builds on your previous work, one on top of another. Animating a human character in the movie Brave just before Monsters University was the most challenging, as people tend to recognize more details in a human, rather than a monster or toy. Describing her transition from Maya to Pixar’s unique animation software, it was ‘like from driving a jeep to riding a limo.’

Kato brings out a character through their movements, creating a unique personality to go along with a pre-designed model and a solid story. Her inspirations include Wallace & Gromit and Miyazaki. She loves to use reference material for character animation, and frequently uses her ‘opinionated’ husband in video reference, who will act it out over and over until it is just right. 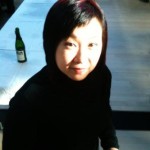 Maria Lee developed a heavy background in advertising as an art-director and graphics before she learned the skills she needed to work at Pixar. Emigrating from Hong Kong as a young girl, Lee used drawing as a way to over come culture-shock. She studied illustration and media arts as an undergrad at SVA in 1988, and eventually earned an MFA in computer arts at the Academy of Art University in the year 2000. She loves to create oil paintings that give a ‘lustrous quality’ to her subjects, and frequently Instagrams her work from Pixar’s weekly life-drawing class. 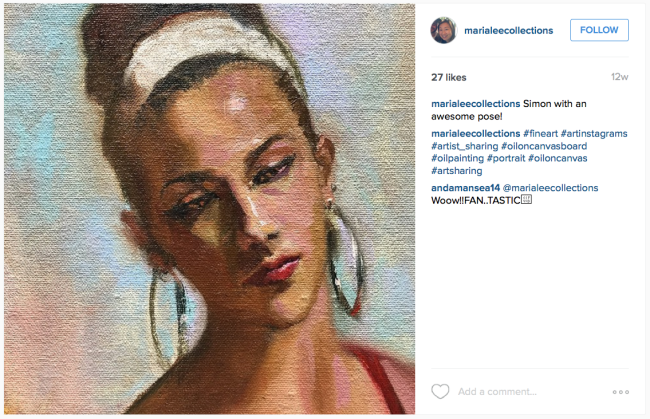 As a character painter and shader, Lee’s responsible not only for the color of a characters surface, but for the specular maps and the displacement maps. She says that the art teams love it when the designs get abstract or when evidence of brush strokes end up in the design; they encourage “stylization.” During the production of Monsters University she used MARI 3D Painting Texture Software (famous for its use in Cameron’s Avatar) and in later movie-productions used Katana Lighting & Look Development Software. Lee believes her background in illustration helps her make better decisions in shading, and while other colleges may have stronger technical emphasis (“learn C++”) its important to have a balance of both, which you can find at SVA.

Lee thinks that her student thesis film was one of the greatest things that she ever did for herself. It’s an abstract film involving a beating heart in a paper bag… ‘It’s about the deconstruction of love…’ she said waving her hands. “Women would get it.” When asked what the boys on the panel did for their thesis films, they had two short answers. Guns and Aliens.

There are so many more interesting things to discuss about Monsters University’s production, not the least of which is the fact that Pixar kept an Amazonian Giant Centipede in a box until a visiting zoologist told them it was hideously poisonous. I encourage you to dive into the director’s commentary on DVD and read more on the web, including a Youtube video demonstrating the “Presto” software. Director Dan Scanlon has said of Monsters University that it’s a story to inspire people who have been through a failure in life. That may be true, but the School of Visual Arts certainly did not fail to educate these great students, who went on to join one of the world’s best animation studios, at Pixar.

“After School Special,” the School of Visual Art’s Alumni Film and Animation Festival, occurs every year in September. Screenings are free and open to the public.  Monsters University is available on Netflix DVD.