Q & A by the Rauch Brothers

Posted by Emmett on Apr 24, 2012 in Feature Articles, Viewseum | No Comments

This week, we are gearing up for ASIFA-East’s ultimate event, the annual ASIFA-East Animation Festival and Awards Ceremony. In preparation and celebration, the Viewseum will be looking back at a few previous winners.

The Rauch Brothers, Mike and Tim, calmly entered the New York animation scene. And in just a short period, they took ASIFA-East, the animation community and the festival circuit by storm with their beautiful collaborations with StoryCorps. 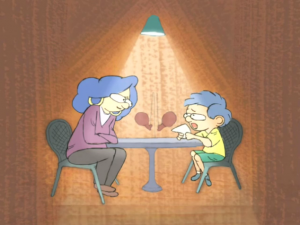 Q & A is the Rauch Brothers’ second StoryCorps adaptation, right after their short German In The Woods. This short follows Joshua Littman, a 7th Grader (at the time) diagnosed with Asperger’s Syndrome, interviewing his mother, Sarah Littman. Asperger’s Syndrome is a form of autism and Joshua’s questions for his mother naturally exhibit some of the traits attributed to Asperger’s, such as his hyper-focus on animals, lack in social abilities, and extreme thought put into simple questions. 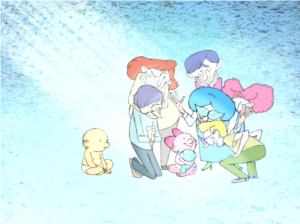 The Rauch Brothers’ animation style is very unique. Their shorts are known for very playful character design, lush color pallets, and expressionistic backgrounds. And yet for all their style’s playfulness and charm, it surprises and succeeds in displaying the various emotions and serious subject matter discussed by StoryCorps’ interviewees. The last 40 seconds of Q & A’s interview is animated in such a subtle way that it brings out the self-consciousness of Joshua’s question and the sincerity of Sarah’s reflections on her role as a mother. 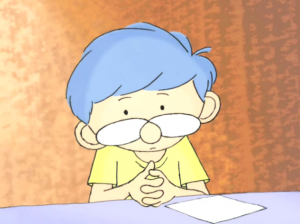 The short took home Best In Show at ASIFA-East 2009. At the Awards Ceremony, Tim and Mike invited Sarah and Joshua Littman, the interviewees of Q & A, to join them in accepting and sharing the award. And after several more shorts, the Rauch Brothers and StoryCorps are currently working on a half-hour special to be broadcast in 2013. 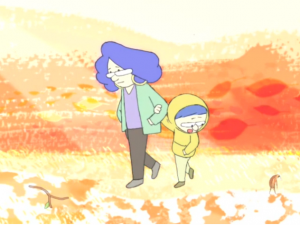 Sarah Littman and Joshua Littman accepted the award with the Rauch Brothers.

For more on the Rauch Brothers, here’s their website.

Let’s hear it for Mike and Tim!