Posted by Emmett on Nov 17, 2011 in ASIFA Events, Industry Events | One Comment

Thursday night’s ASIFA-East event placed the spotlight on Pizza Island, located in Brooklyn, NY. Despite easily appearing like a cartoonists collective, its members insist it is not a collective, but simply a group of artists who like working together. The main difference being that there are no collective rules imposed upon members, and each is encouraged to work on their own independent projects. 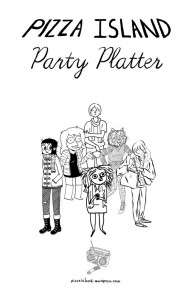 Patricia Burgess hosted the evening, which focused primarily on the artists’ work processes and the valuable functions of a shared studio space. Representing PI were 3/6 of the current group: Meredith Gran, Julia Wertz, and Kate Beaton. Although the studio is all female members at the moment, they clarified Pizza Island is NOT a female-only collective. 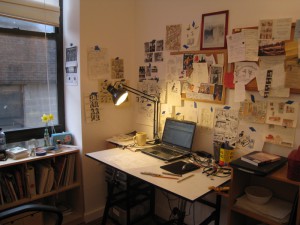 Although there is animation done at Pizza Island, comics appear to be the preferred medium of the artists. Henceforth, much of the evening’s discussion focused on working as a comic-book artist in the present. The panelists cite comics as a cheap way to tell a story and be funny. The audience is also warned not to get too autobiographical with their stories: in other words, no stories about NOT getting published and getting depressed (common motifs for us artists). There was a particularly long discussion about the pros and cons of a having an agent. Apparently, some places (i.e. publishing houses) won’t look at anything unless it comes from an agent. And although an agent might work out, they can be very intimidating. Your work has to prove itself to be sellable, and worth their time. 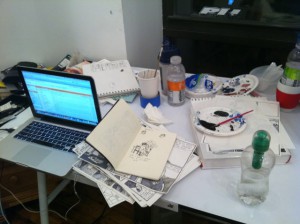 There are artists out there who feel they work better in a studio environment, something which should not come as a surprise or a complaint to anyone. The founding artists of PI realized they needed a studio setting away from home, where their art would be the primary focus. Judging by their own descriptions and photos posted on their blog, the environment is made up of individual desks for each artist, each one her own bunker. In a way, its kind of like art school, in which everyone is inspiring one another and helping each other keep up with work that is constantly changing. The work is individual, and one of the ladies mentioned that a visiting friend had wanted to see the studio on her trip, but was told that the studio was just a bunch people at their desks with their heads down. 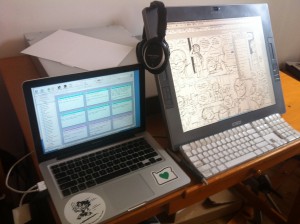 The evening also shed some light on issues artists are generally facing today. Although not a big surprise to most, there seems to be some relief in these issues being spoken out loud. Particularly how it has come to a point that commercial studios don’t train their artists anymore, and won’t hire you unless you’ve done all the work that proves you are worth hiring. And due to the internet, more comics are going digital, hence there is less revenue in syndication, and there is no more tenure of the cartoonist. While these are sad truths, the panelists seem to be in agreement that they want to do this because they love it and have to cut corners to keep doing it.

The author has to commend this panel for the honesty of what is happening in the art world today, and how it is changing. Although it may be disheartening for art students to hear, it is a truth that should not stay hidden. Artists can work better in studio environments, and with the day-to-day reliance of the internet as well as the effects of the economy, artists succeed with their passion, commitment, and knowledge of how to navigate the system. No art industry is lucrative anymore. But if you are good at something and have a passion for it, pursue it by all means.

Be sure to keep up Pizza Island on their wordpress site.