Posted by Tristian on Jul 20, 2015 in Interviews, Uncategorized | No Comments

Most corporate offices are content to dress their entrances with glass doors, frigid marble and post-9/11 turn-styles, which means Viacom is not most corporations. The 1515 Broadway lobby has those features and more: a leviathan of a yarn sculpture, which adamantly refuses to camouflage itself. Porous and vibrant, it winds its way past you as you ascend the escalator. A dragon it is not, but there is essence of moat. RSVPs were strictly required, guarding the lobby’s further suburban luxuries.

The New York ASIFA-East screening of Nickelodeon’s Pig Goat Banana Cricket took place Monday June 29th, at The Lodge, which is Viacom’s event-space/cafeteria. A large hall, one side demurely shaded from windows overlooking the bustling city, and the other shimmering in silvery beads that hid secret interiors.   For the lucky ones easily passing from the end of a 5:30 workday to 6pm doors, there was time for a glass of wine or beer before the 6:30 show. There were some fried snacks on hand as well, but I’ve been saying no to fried food recently (and always no to fried pickles). Fortunately the chocolate bananas were relatively healthy.

Linda Beck (ASIFA-East co-president) was our host. Her Nickelodeon story began in 2007, as a Line Producer for Team Umizoomi (which received a shout out on Law & Order: SVU) and in recent years she moved into development scout for Nick Jr, and now works in artist-development. With professional ease and pumped up kicks, Linda introduced the show, which “follows the eponymous characters Pig (the fool), Goat (the artist), Banana (the wise-guy) and Cricket (the brain) as four friends and roommates who live in a fantastical city where just about anything comes to life.” Boopelite City: a land of “cutting edge illustrations fused with…surprising industrial design.” Pig Goat Banana Cricket premiered Saturday, July 18th , 10:30 ET/PT, with a sneak peek Thursday July 16th, 9:30pm after the 2015 Kids Choice Sports Awards. 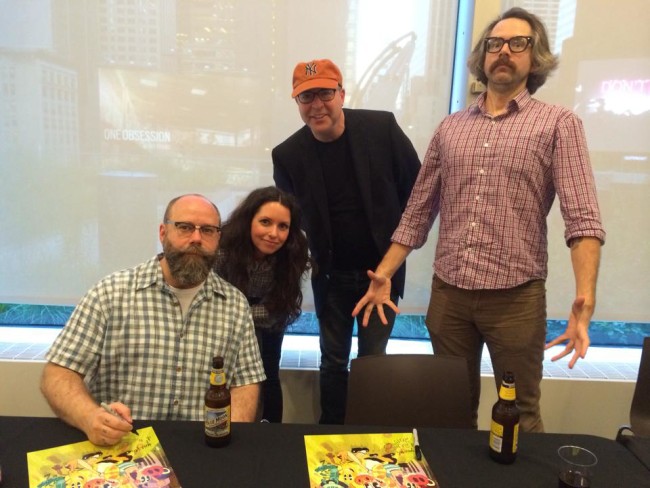 “Although the series is based on their comic from Nickelodeon Magazine,chance [sic] are probably quite good that you’ll see nothing resembling the riotous adult themes and visuals found in Cooper’s Puke and Explode or Ryan’s Angry Youth Comix.”  ~ Scott Thill, Cartoonbrew

Linda Beck then introduced Russell Hicks (President, Content Development and Production, Nickelodeon Group). “Hicks started his career as an animator that led him to work on Teddy Ruxpin, the first talking teddy bear for Worlds of Wonder toys. It is this combination of both animation and consumer products that has given Hicks his extensive knowledge of the children’s entertainment world.” Mr. Hicks works in sunny California and was excited to reconnect to the NYC animation scene, which he affectionately referred to as Scrappy Doo. Pig Goat Banana Cricket (PGBC) “is deeply rooted in Nickelodeon’s tradition of great character-driven storytelling, by creators who are the ultimate purveyors of comedy.” The co-creators of the show Dave Cooper’s and Johnny Ryans’ “distinct aesthetic vision is revealed by their comedic sensibilities to tell wacky adventures that are definitely out of this world.”

Hicks then introduced the panel for the evening. Johnny Ryan (MAD Magazine, DC Comics, Workaholics, PRISON PIT!!!!!) co-executive producer, started his career as a self-published indie comic book artist. Dave Cooper (Futurama) co-exeuctive producer, started off in graphics novels and oil painting. And finally there was, Dave Sacks (The Simpsons, 3rd Rock from the Sun, Malcolm in the Middle, and the Harvard Lampoon) executive producer.

Rows of comfortable plastic chairs faced the stage, with pull down projection screens on the left and right sides so we could all watch the first episode of Pig Goat Banana Cricket. On a raised dias in front of us were four comfy chairs. Linda Beck started off the discussion quickly after the credits rolled.

Dave Cooper and Johnny Ryan’s work on PGBC began when Nickelodeon reached out to Cooper. Nickelodeon was interested in their previous work from Nickelodeon Magazine, in particular a comic strip of their Pig Robot Banana (? Possibly titled in a different order). In any case, it had only three characters, and the concept was fleshed out to include a fourth. Cooper and Ryan first met on a train coming back from a festival in Paris, and one of their early collaborations was the comic Cupcakes of Time (Nickelodeon Magazine). They describe their creative relationship as one of mutual respect and disagreement, and David Sachs is brought in as the tiebreaker…”funniest joke wins.” They all work together on the same floor, as opposed to The Simpsons’ offices, where the writers could be in an entirely different building. Sachs believes that they work from a place of ego to a place of quality.

Windows of The Lodge

When comparing PGBC to past projects, Cooper is glad that he no longer is just a ‘singular control freak,’ ‘going full steam’ with whatever idea he decides is best. Sachs advised us that show-running is like “being president of a small company while running a 7-11.” Cooper also said that he was influenced by Robert Crumb comics, while Sachs said he loved comedy with emotion, and sensory bombardment (which I hope is not just a concept but some cool indie comic).

Beck investigated further into the magic of the show’s production. The major challenge was to preserve the spontaneity of the artists (show-creators) while still creating with a large production company. As for the story, the ‘4-part concerto’ was an organic redevelopment. Nickelodeon originally wanted an “11-minute” that showcased all 4 characters together, but that devolved into individual unrelated cartoons. One story note changed the whole structure: they moved the climax of Pig’s story to the end of the show arc. This weaving of the cartoon stories together is what became great about the show. 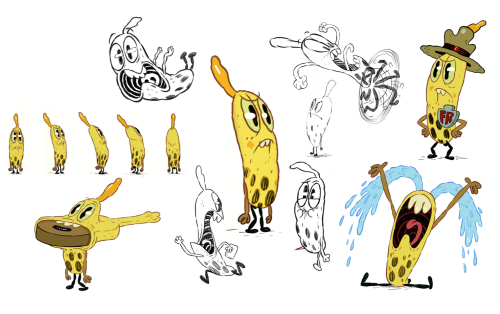 Even though Pig Goat Banana Cricket feels story-board driven, there weren’t that many contributions from the story-board artists. The writers just sat and wrote so many gags, and gags on gags, for example “what if the earth gets hit by a comet?” became “what if the comet falls in love with the earth?” Furthermore, they don’t even draw thumbnails for their gags.

I was interested in the character design’s complicated double eye-shine (which kind of looked like alien double pupils) and curlicue outlines. I asked in keeping with preserving the artist’s spontaneity, how do these details affect the way people stay on model? It turned out to be super challenging for the team, but in a way that was exciting and self-satisfying for the designers and animators. Of course, it will have to be streamlined in the future, just as another audience member pointed out that in Superjail many of the original designs were simplified once they hit the actual animation process. Bottom line, the animators really enjoyed the challenge.

The voice actors of PGBC are in order: Matt Jones (Breaking Bad), Candi Milo (TripTank), Thomas Wilson (Back to the Future), and Paul Rugg, who is actually the star and writer of Freakazoid. Casting Rugg as Cricket was a challenge. Originally starting with 120 potential actors, it was narrowed down to 4 people, and initially cast as an Spock-like voice. Testing/notes decided to cast someone younger sounding with Rugg, who impressed many with his Freakazoid background and professional behavior. I’m also going to point out that CRICKET IS NOT A CRICKET. He is in fact a praying mantis, but apparently there was already a cartoon on air with a character named Mantis (wait, is that Kung Fu Panda?), so he got a name change.

Someone in the audience wondered if Pig was introduced first because he was the most relatable, and Cricket last as the least relatable (where are my Freud books…). But no, the character introductions simply followed the show’s title, and won’t always do so in the future. Goat turned out to be a bit of a mystery in the shows conception. She was going to be sort of bipolar like: “I’m a girl and I like cute stuff, but I’ll kill you.” [Pleasantly they delivered that line with no crazy-voice emphasis on ‘kill’]. She’s not the den mother, she’s just ‘one of the guys.’   [Editor’s note: why can’t she just be one of the girls? #patriarchy But I admire the idea that she stands on equal footing with her male roommates. Also she has great nonsense curse words].

<SPOILERS> Shopping Cart Dog was soooo cute. And the reveal of the shopping cart puppies produced a combination of horror and laughter in multiple live audiences. “Erhmagerd, that’s why you were running so slow!!!!” Will we see the return of Shopping Cart Dog? Yes, when he comes back to fight Pyschopath Giraffe. </SPOILERS>

Cooper makes a special oil(?) painting for the title card of each episode. And while Nickelodeon definitely dictates the target audience and what’s ‘too far’, the writers work within parameters and write mainly for their own yuks.

I got in touch with several ASIFA-East members in attendance to delve a little deeper into what Pig Goat Banana Cricket meant to them. Katie Cropper Klein (Adjunct Professor – School of Visual Arts, ASIFA-East Mailing List Admin) was surprised that it was animated overseas, because it was “so dense with visuals” that it couldn’t be remotely directed. She also referenced the extreme pacing of action, which one of the creators described as “ADHD.” While we watched the episode straight through, I imagine the commercial breaks are being inserted between the character’s title cards and segments.

Alana Conway (ACA Illustration) found everyone very funny and personable, especially Mr. Hicks. She was inspired by the talk of creator content to find a way in to the exclusive Nickelodeon Artist’s Collective, which she admires as one of the best opportunities for young freelance animators to get into the TV business.

There were some more critical reactions as well.  One man thought it was a pretty funny show: “…aside from a few noticeably lame jokes (“Text me!). I was surprised to hear that they barely had an idea for a show when they pitched it; it seems like they were pitching the people and not the show.”

Finally Ilana Schwartz (JavaDoodles, Nickelodeon) thought PGBC was “MOST EXCELLENT.” “It was riveting and insightful to hear about their process of show creation! There was such a positive energy in the room the entire time.” Ilana is probably plotting a way to work on the show as you read this.