Orbis Park is a double dedication: 1 to classical animation, and 2 to New York City. Andrew Kaiko’s pursuit of classical character animation during such a trying time for New York’s animation industry culminates in this film.

The inspiration of New York and Central Park is not only evident, but also very affectionate. The setting has just as many colorful characters as you would find during a stroll through the heart of Manhattan. The film follows Lauren, a pedi-cab driver participating in a park scavenger hunt. However, she finds her participation hindered by an over-weight, inconsiderate passenger. What was supposed to be a simple job for Lauren becomes something along the lines of a futile olympic sport. 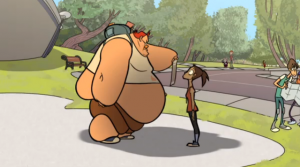 Andrew was kind enough to provide us with some background information on Orbis Park’s background and history:

“The idea came from seeing these pedicabs in Central Park, which provided good opportunities for a visual, kinetic narrative. These apparently simple vehicles are almost entirely run on mechanics. They all have an older, more tactile feel about them than most vehicles. I drew some sketches, keeping contrast in shapes and narrative in mind. One of them was of a tiny woman pulling a fat guy, which I liked the best, and the story basically wrote itself from there. There really is no pedicab scavenger hunt I know of that goes by the rules in the short, but it provided the kind of story I wanted.

My way of drawing is very much inspired by the original Looney Tunes shorts, but a bit of Hanna-Barbera as well, you can see that most clearly in the background characters. I didn’t want the movement to look too blocky though- I like animation to look fluid.  Disney is also one of my inspirations, but I didn’t use it here for the most part.”

Andrew also provided some personal details of his recent career in New York’s animation industry and how they led to the production of this film. After working full-time at Animation Collective for two years, Andrew went freelance after the studio downsized in the midst of the economic crisis. From these experiences, Andrew states:

“I did learn a lesson that you really need to be in control of your own properties if you want to see this type of animation made.

This is my first personal short as a professional animator since my college Senior thesis five years ago and the first that is self-funded. It is an attempt to display the type of animation I always wanted to do outside of client-based work and the inspirations that I am affected by every day. As opposed to the thesis, where I was essentially the only person working on it, this is the first short where I wanted to gather a more solid crew and thus is my first time really directing other people.  The animation assistants, background artist, voices, and audio designer were all found online and they all sent their work back to me online, from a combination of Facebook.com, Voices.com, or referrals.  I made sure I knew my character animation assistants in person from past jobs, in order to know exactly how they work and what their work is like.”

Orbis Park is currently making its rounds to various animation festivals, so this Viewseum entry may be temporary for now. However, it will not be last we see of this film or of Andrew’s work. In fact, its artists like Mr. Kaiko that keep the art of classic animation alive and appreciated.