Posted by dayna on Mar 3, 2013 in Feature Articles | No Comments 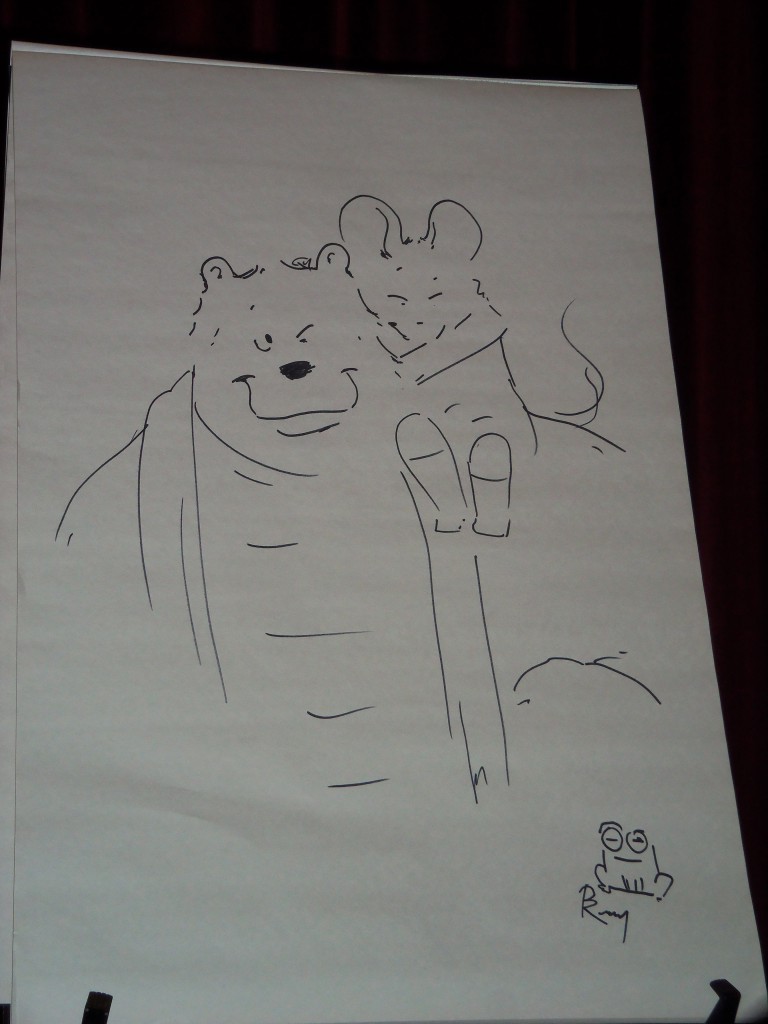 The thoroughly charming and brilliant Ernest & Celestine had its US premiere at the New York international Children’s Film Festival Friday night.  Children and adults packed the house to watch this wonderful film from the producers of The Secret of Kells and The Triplet’s of Belleville.  This film is a beautiful illustration of the power of friendship to overcome all barriers – most of them in fact set up by societal prejudices.  Most of us can relate to the lives of these two outcasts from different communities – the bears live up top the streets and regard the mice with disgust or as lunch, the mice live down below and fear the bears.  Director Benjamin Renner held a Q & A with the audience afterwards.  Since this is a children’s festival, most of the questions were asked by kids, which makes for an interesting and fun dialogue!  Questions ranged from Why did you make the film? To Did you make the whole film yourself?  I learned that the film is based on a popular children’s book in France.  All the backgrounds are done in watercolor, while the animation is done in Flash.  One child wanted to know how he came up with the character’s hobbies?  In the film, Ernest plays music, while Celestine is a painter.  Benjamin spoke of how he really identified with the troubled feelings a child can feel when told they should be a doctor or something traditionally regarded as a more lucrative profession, instead of feeling they have the freedom to follow their passions.  To close the evening, he delighted everyone with a drawing of Ernest and Celestine.

I love this festival not only because it’s a chance to see premieres of animated features from around the world as well as superb shorts, but also because it puts you in the midst of such innocence in the form of children watching these films for the first time.   I can’t imagine most are exposed to these films anywhere else.  These are not big blockbuster hits in theatres across the US – these are films made by other countries – with different sensibilities, different ways of telling a story.  It’s really such a joy to listen to their reactions while they watch these films.  They are encouraged to really express their thoughts while watching.  As an animator, I find it akin to being a fly on the wall and I feel it really puts you in touch with audiences.  Short Films One débuted the next day with animated shorts like the emotional At The Opera from Juan Pablo Zarmella Argentina as well as trippy and funny Subway Train from Garrett Davis of the US.  Everyone is asked to rate these films from loved it! to hated it!  That’s when you hear how people really feel!  Pes’s film Fresh Guacamole played both before Ernest & Celestine and in the Shorts Film program.  Reactions ranged from Ew! to lots of laughter and amusement.

This festival is going on all month long.  Get out there and be inspired by such films as From Up on Poppy Hill, Wolf Children, The Painting, and Hey Krishna.  And don’t forget to use your ASIFA-East discount code for $3 off each ticket.  Contact us if you need the code.  http://gkids.tv/inTheaters.cfm