On Thursday, December 5, ASIFA-East held its annual Open-Screening for the year 2013. Strangely enough, this one took place later in December, as opposed to September or October, just as the ASIFA season is getting back in full swing. Even so, the Open Screening offers a platform for members and alike to share personal and commissioned projects, both finished and works-in-progress (though the latter seems to be the norm). And while the films are screened in a large amphitheater, the atmosphere is generally very casual. Nobody’s chances at anything are on the line. 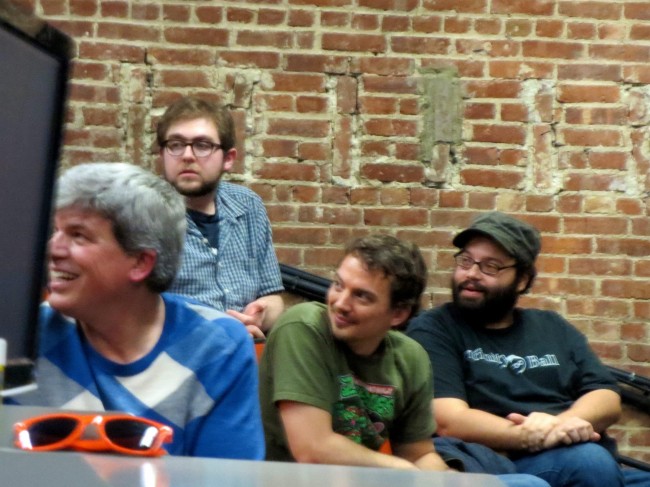 This year’s open screening included work with a lot of potential, both from first time filmmakers and longtime regulars. Board member Tristian Goik acted as our moderator for the evening. As per the evening’s few rules, all filmmakers were in attendance for their work to be screened. This rule is crucial for another reason, as it is a great way for new faces to be introduced both in presence and in artistry. Although the turnout seemed small compared to previous years, it probably helped make the evening seem all the more casual and close-knit. 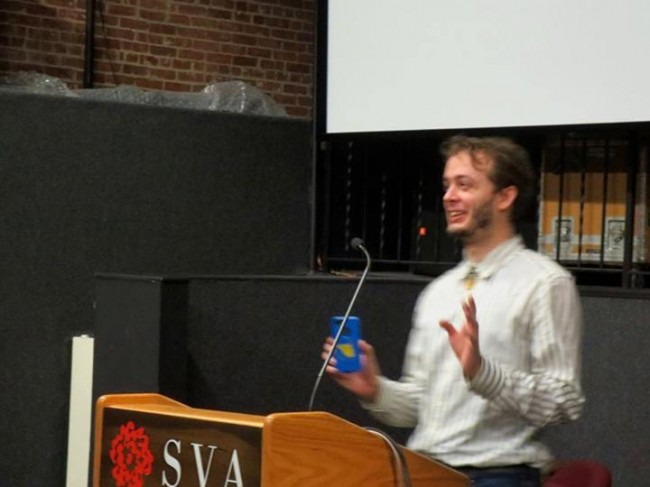 Though not a lot of diversity tonight, the screening feels very complete. One thing there was no shortage of was humor. A lot of comedy tonight, and some well toned comedy at that. Also, most of the work presented tonight is 2D animation, either flash or hand-drawn. We did have some experimental work and some drama to add some variety. But unlike the festival judgings, we can’t tell what the current trends in indie animation are from the Open Screening. The works we were presented with tonight are as follows:

Opening up the screening is Rick Pickens, from Hershey, PA. Rick presents four animated advertisements, all in which a subversive sense of humor pervades them all. Some stabs at religion and sexuality aren’t such a bad way to start an evening.

Syrian-born Jamil is a new face to the New York animation community. Although his background is in CG animation, he is working on his first hand-drawn 2D short, the progress of which blew everyone away. The film, a dark comedy about “change” with a slight Kubrick edge to it, is definitely a film to keep an eye out for when it is finished. To identify the film, there are a few bits and snippets Jamil has posted on his blog and Vimeo. 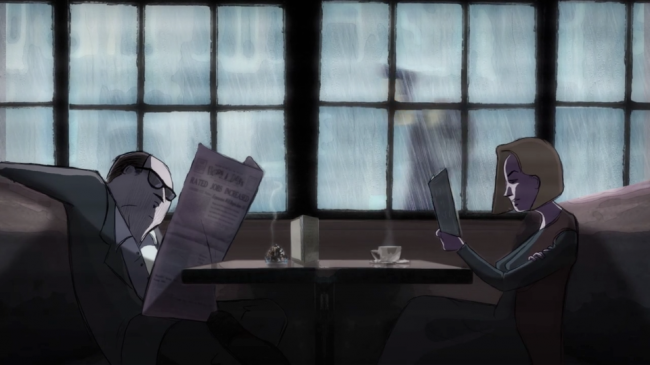 A finished shot from Jamil’s film.

Stephen introduced a character he says he’s been drawing for some time. In the ever growing world of GIFs, it is becoming clearer that GIFs can give way to bigger projects. And Stephen’s surrealistic looking character and world are nicely introduced to us this way. A lot of people commented on Stephen’s obvious being influenced by Don Hertzfeldt, of which Stephen appeared to accept. Some of these loops and other work can be found on here on Stephen’s Tumblr.

Another new face for the evening, playwright Kim Yaged presents an animated short film of which she wrote and directed. Intended to be an animated web series, Hypocrites and Strippers follows a woman dating a stripper, with a heavy focus on gender and religious hypocrisy. More info on Kim can be found here.

Adam presents a piece with some personal firsts. Top most, this is his first music video, animated in traditional 2D. The video stands on its own rather nicely with a unique narrative, following a flawed relationship between a man in a spacesuit, and his girlfriend. A relationship that is both violent and gratifying. Also of note is the Spaceman’s cat, very cute and well animated. And anyone who knows Adam should know that cats love him. Check out Adam here and especially here.

Andrew has had a busy year. Although he just unleashed a new film, Andrew opted to instead present his two Christmas animations, old and new. Both feature Santa Claus, and his 2013 animation is coated in fun colors and bouncing punk rock. It can be viewed here, as well as this classic.

Jacob has become a recent star on the New York scene, having won the ASIFA-East festival’s Best In Show award (definitely a film to check out). And he’s still keeping busy with a new short film in-progress. Even unfinished, we could all enjoy what a heartwarming and relaxed piece this film is. Everyone commented on what a nice variety it added to the evening so far. Check out more of Jacob’s work here.

Yes, I am writing my own involvement into this article. Give ’em Hell Adele presents animated phone conversations between Adele and those who “offend” her sense of justice, morals, and especially her “unseen” daughter. This short segment is part of the larger Coddett Project, spearheaded by comedienne and Adele voice, Kerry Coddett. This and the rest of the Coddett Project can be viewed here.

YouTube favorite Rob Yulfo managed to join us tonight, ignoring the rules of his convalescence like a trooper. Always busy with something, Rob presented Coco Toon, a satire that reminds us of why we love or hate Conan, Andy and Leno. Next up, Late shows Rob further pushing his artistry while also showing another reason some serial killers just cant get away with it. Both are viewable on Rob’s YouTube channel, and whoever reads this, I encourage you to watch. 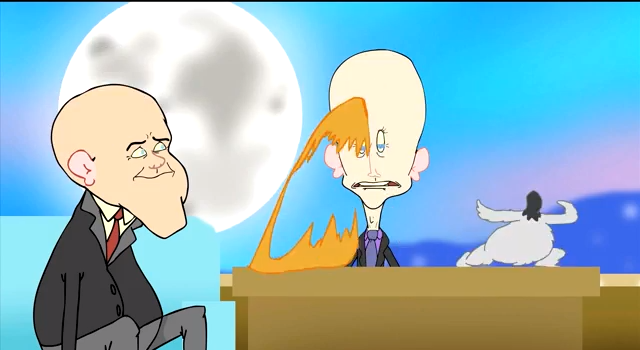 Seriously, can’t we all just get along??

Stephen brought a few of his recent Rubber Onion segments, of which Rob Yulfo is also a contributor. These are also viewable on YouTube, and all I can say is you will never think of Bugs Bunny and Speed Racer the same way ever again. No seriously, these guys are funny! More from their YouTube channel can be found here.

If the host can present his own work (James Franco anyone), then so can the writer of this article. Tristian presents a pencil test using an After Effects composite as well as a photograph the author happened to be present for. Trisitian says the style is inspired by Fran Krause’s Nosy Bear, a breakthrough in sketchbook animation. Also, someone question Tristian to the identity of username: Suicune Hipster. More of Tristian’s work to be found here.

Our dear faithful, Bob Lyons, presented us with a recent anijam from his Experimental Animation course at Pratt Institute. Nightmares involves several different artists exploring their own ideas of disturbing imagery and alternative approaches to filmmaking. Someone noted at the end that some of these students might need therapy. But you can say that about anyone who goes for the darker side of filmmaking. The film can be viewed here on Bob’s Vimeo Channel. 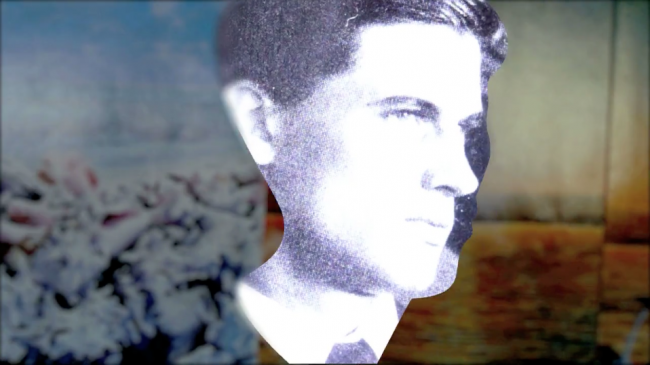 John presented an old clip from his NYU studies, live-animation filmed in beautiful black and white on a Bolex (never a bad day for that kind of stuff). Second, and perhaps more anticipated, John presented a trailer for a short film he’s been working on for a few years, and recently announced its completion. John intends to let the film premiere at festivals, but the trailer already demonstrates a beautiful work of hand-drawn animation with surrealistic design and story. I have a feeling we’ll be hearing a lot about this film in the coming months.

The night ended, like it should, with a gathering at the nearest watering hole. Tonight, we all felt a sense of renewed excitement at what our NY animation community is still capable of producing. A lot of humor and a need to update old artistry in the present stood out for us tonight. 2D animation still gets a lot of love in New York, and New York is still capable of producing great artists. 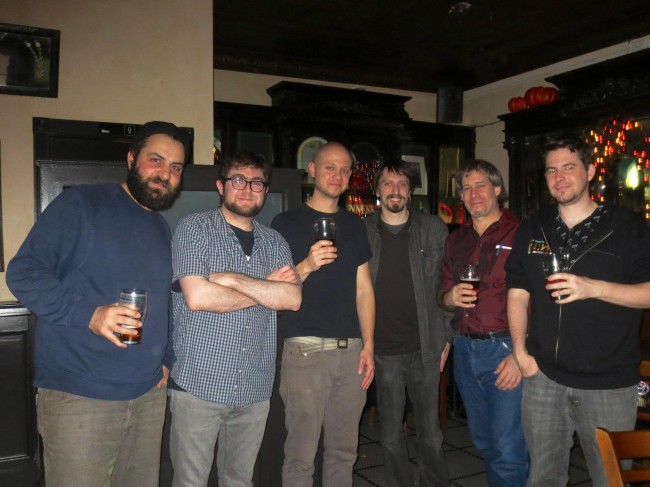 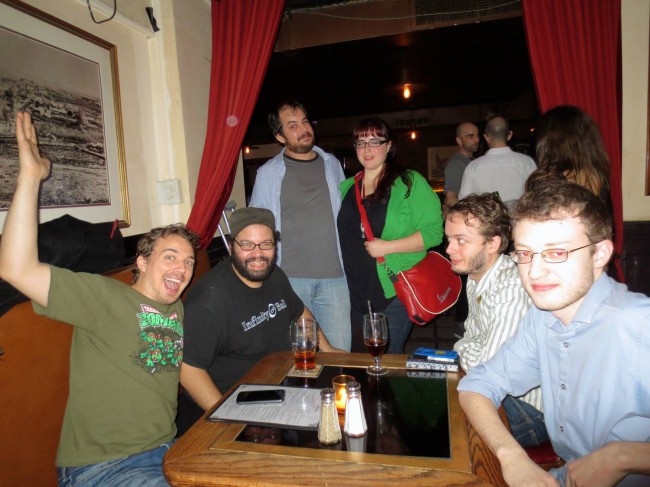 So, into next year, keep an eye out. There’s much animation to come.