“Only Love” by Lev Polyakov

(Warning NSFW: Images of violence, gore, nudity, and improper use of paint brushes.)

The Viewseum finally makes a return after a(-n unintentionally) long break! Lots of personal, professional, and assorted other issues aside, the Viewseum is up again to ring in the next season of ASIFA-East!

This season opens up with animator Lev Polyakov’s opus, Only Love. Lev completed the film during his 2nd year studying animation at SVA (an amazing feat considering the film is 15 minutes long). 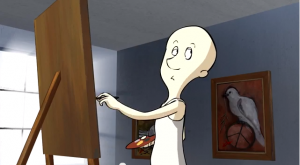 The film takes place in an Eastern-European urban setting, and follows a “Great” Dictator, whose public image serves as a positive beacon to his “dogs” and followers alike. The Dictator’s obsession with and representation of Peacetime overshadows his rather arrogant nature, along with many other negative qualities. Underneath all the pride and celebration, the dictator is vindictive, self-important, cowardly and afraid of death. One could say the character’s leadership role has induced delusions of grandeur. When a rebel leader attempts to instigate a rally, the Dictator very shamelessly ignores the danger presented, and insists his “dogs” take care of everything. After several guards are killed, the Dictator simply puts up a peace sign, back to playing the public image of peace. However, when he is alone in bed, he suffers from nightmares often involving the victims senselessly killed before him. 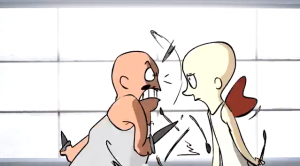 Most of the film revolves around the relationship between the Dictator and his antagonist, the Rebel Leader. Its a kind of role reversal: the Dictator is cowardly and vindictive, meek and plain looking, yet the one with the most power. The Rebel Leader, however, is a robust, verbal and self-sufficient man, whose ambiguous motives are undermined by his perceived role as a bad guy. A very unusual relationship between the two men, who may be more equal to each other than they realize. 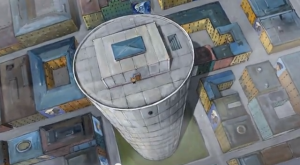 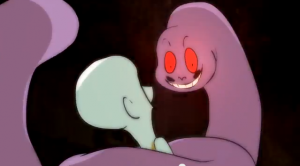 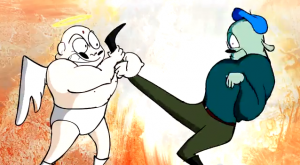 The film is executed in Flash and in a very loose 2D style. There are some great moments of effects animation, especially in the scenes of the Dictator’s nightmares. Also of note is the detail in the backgrounds. Most of the scenes involve backgrounds suggesting Eastern-Europe, painted in grey and brown tones, suggesting a dirty city with its brightness being concealed. When the scenes get more exciting, particularly the fight sequences, the backgrounds become more colorful and abstract. 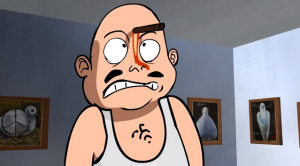 Forget the pen. Its the paintbrush that’s mightier!

The film premiered at the Woodstock Film Festival, after which it played at over 30 film festivals, winning 7 awards in the process. Along with the festivals, the film also received distribution through Ouat Media and Shorts International. 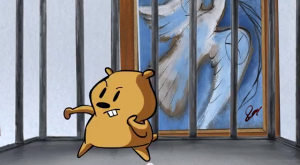 Check out more of Lev’s work here. Thank you for submitting, Lev!

And welcome back to the Viewseum!