One Minute Fluidtoons on Paper Two and Three by Brett W. Thompson

Happy New Year to all viewers and patrons!

We kick off the new year with the work of Brett W. Thompson. Brett’s independent work consists primarily of his Fluidtoons shorts. These shorts are generally stream-of-conciousness drawings in which characters morph into and out of one another, all the while dispersing into various shapes. Brett’s drawings (as well as his painting style) evoke something similar to Keith Haring combined with a love for cartoon expressions. 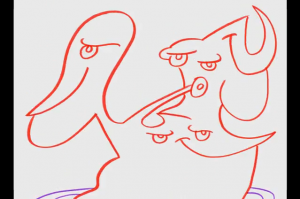 This particular clip is a combination of two different Fluidtoons (numbers 2 and 3 respectively). Fluidtoons is done in a relatively simple fashion: marker on paper, with no planning. The animation is then tied together with an even more stream-of-consciousness  soundtrack. It is experimental, with notable enjoyment on both sides.

Originally the president of ASIFA-Atlanta, Brett recently made the trek to New York.

You can see more of Brett’s work here.