Posted by Tristian on Aug 5, 2016 in Uncategorized | No Comments

“That’s the first time I ever heard the 1950’s called a renaissance,” J.J. Sedelmaier wondered out loud, in the Brooklyn Academy of Music.  It was Friday, July 29th, 2016, at the 13th Animation Block Party.  J.J. (animator, Saturday Night Live) was moderating “New York Animated Ads,” a selection of films ranging from 1929 to 2015, and a panel featuring Joe Burrascano (founder, Aardman Nathan Love), Howard Beckerman (professor, School of Visual Arts), Emily Hubley (animator, The Toe Tactic) and Doug Crane (animator, Terry Toons).  This was the 2nd day of the festival, and I’ve added our Instagram Photos to the article to give you a sense of the rest of the weekend. 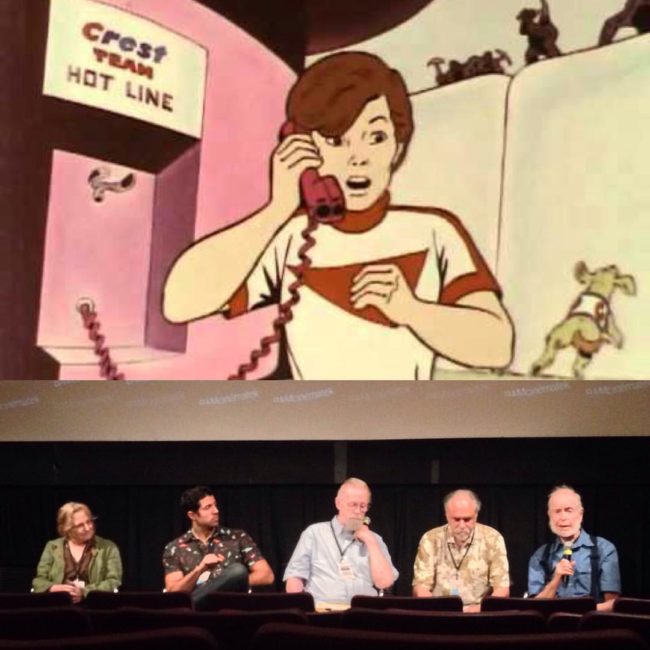 “Well,” Doug Crane replied, “labor-wise it was [a renaissance]…”  Over 50 years ago there were maybe 50 different animation studios crowding New York: all of them drawing, painting, inking, rendering, and mainly concentrated in the Manhattan streets from 43rd street to 48th, between 5th and 6th avenue.  You could drop off a finished project in the morning at one company and leave with another job at a new company in the evening, all in the same building.  A Renaissance indeed.

Late night at opening of #animationblockparty #abp with filmmakers talking about their ouvre… Only the devoted fans are left to ask questions #animation #asifaeast #rooftopfilms #nyu #hedgehoginthefog — with Bryan Brinkman and Matt Christensen at Brookfield Place New York.

J.J. and Animation Block Party knew that it was important to save the films and work that these advertising agencies produced.  Many of the remaining copies are rare, and even those are not the best quality.  Some sadly were even deemed unfit for public presentation.

But not Safety Shoes! (Len Glasser, 1965).  This bizarre rambling industrial video was a cult classic amongst the agencies of the time, most of whom were jealous of the wide range of creative freedom it’s creators enjoyed.  Clocking in at almost 20 minutes, a series of randomly inter-cut vignettes demonstrates the ‘virtues of shoe safety, brought to you by Lehigh Shoe Company.’  The live action and animated scenes could run wild, as long as everything was neatly capped by a serious safety announcement at the end of the film.  “I want to be a friend to your feet.” 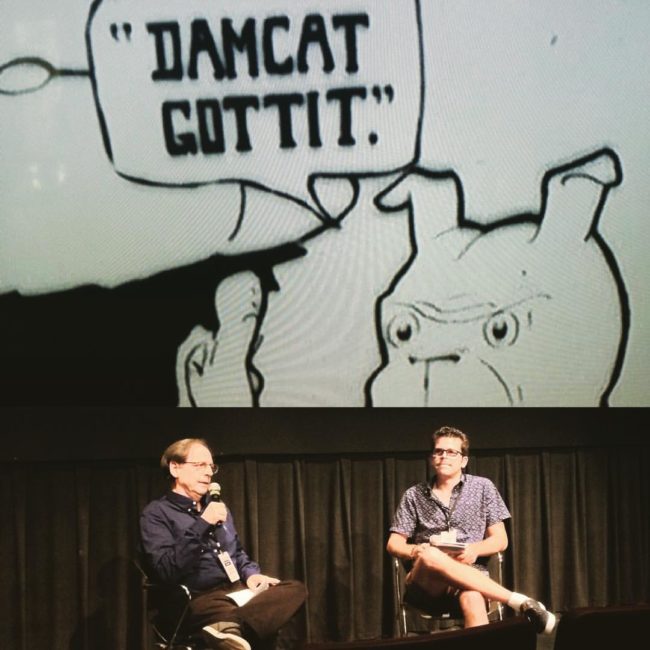 The earliest film Finding His Voice (Fleischer, Western Electric, 1929) actually taught me about sound film… somehow in college I missed the fact that the bars on sound film were created by vibrating wires that regulated light exposure to photosensitive film, creating a visual pattern that later varied the intensity of light shone on another sound generator.  Gosh, we really had some geniuses 100 years ago.  The songs however were terribly sappy (Row, row row your Boat is no Kanye).

J.J. was prompted by this film to discuss the early days of the 3-hole-pegbar VS 2-Peg system.  In 1928 3-pegs were patented, and solved complicated problems, such as preventing air bubbles in a stack of cells, that were being compressed by a glass plate during the shooting of a frame.  Get the straight facts from J.J. at Print Magazine.  The East and West coast battled it out as NY preferred to punch holes on top of the paper (so your hand doesn’t bump in during shooting) while California (or was it just Disney) preferred the holes on the bottom, which made it easier to flip through drawings.  Apparently you couldn’t please anybody back then, as they all seemed to change their minds at a moment’s notice. 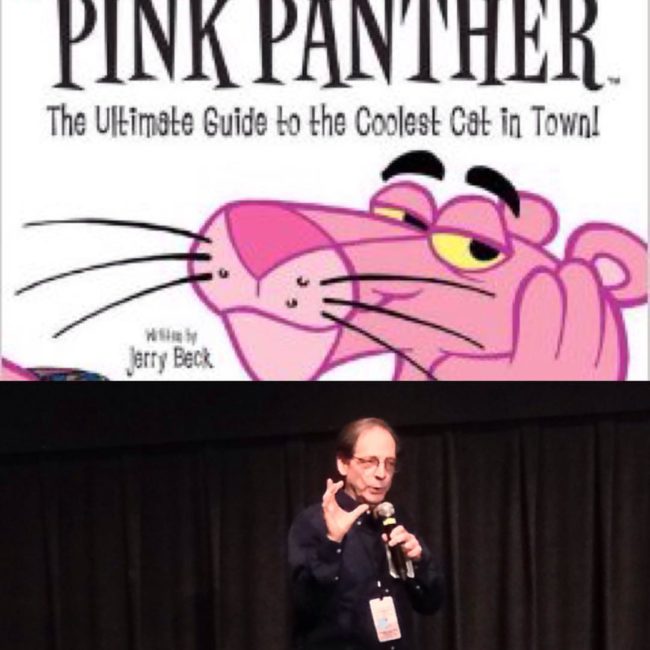 The rest of the program rounded out the century.  An early Mr. Peanut Butter ad was strange… we open on a bunch of boys and girls running into a woman’s kitchen, gathering around sandwiches.  “Oh no,” the mom laughs, “they aren’t all mine.”  Cut to making PB&J as the announcer says that “Mr. Peanut really gets around” and “spreads easily.”   A Piels Beer Commercial (Deitch, 1957) was amusing, but at the time, comedy was thought not to sell well, as it distracted the consumer from the product.  Fortunately, the animated duo Bert & Harry made the beer successful, despite it’s questionable taste.  Apparently “Harry and Bert” had their billing switched around after the client thought it sounded too much like “Aryan Bert.”

There was also a beautiful CBS Seasons Greetings (Blechman 1966) )spot featuring winter songbirds and mysterious lumberjack (familiar from some other ASIFA event).  And Emily Hubley discussed the famous I Want My Maypo! (Hubley 1956) commercial: Heublien, Inc approached the Hubley’s to create an ad campaign to legitimize their cereal, which was being used as a shady tax loophole of some kind (allegedly).  “Get Those Reds To Do It!” was the order from on high, as Emily told it.  Ah, McCarthyism. 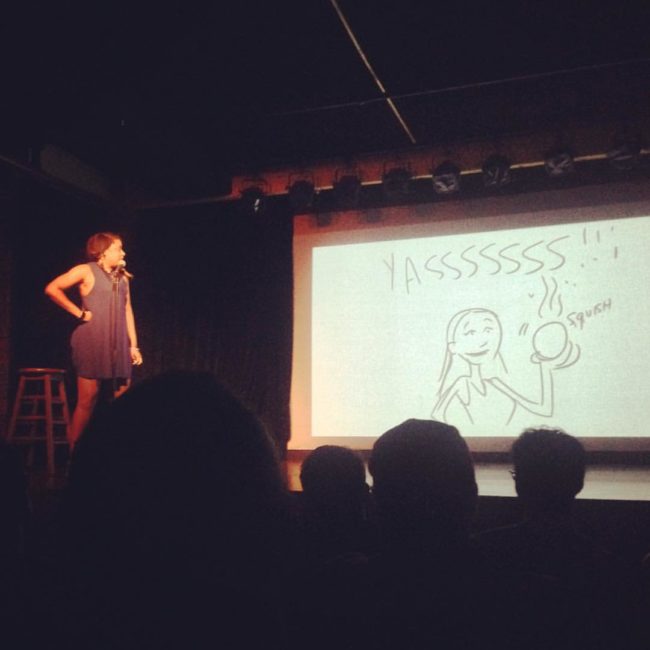 Cavity Creeps (Crest, ~1977 Herbe Trimpe) marked a decade of increasing cultural awareness.  Which means that a non-white person was animated.  (The E-Man was black!  A great comic book style of muscled heroes with volume and monsters with rocky depth).  It made an interesting comparison to J.J.’s own Home Savings & Loan commercial (1995).  The client wanted a retro 1950’s style, with the specific addition of African Americans and Hispanics.  It all seems very complicated now: a pre 9/11 world that wanted to be PC and Greatest Gen all at the same time, without addressing the Jim Crow of the past, and here I am writing about their vintage animation, while modern demagogues proclaim that USA (USA USA) is too weak because of it’s political correctness.  It’s enough to make your head spin!  Let’s just animate whatever we want. 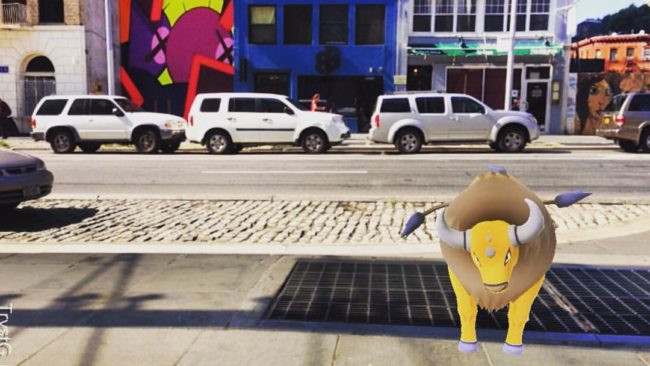 My friend needs an extra ticket for Transformers… #abp — at BAM.

Doug Crane ended the show with a touching tale of his youth.  In his early days as a clean up artist at Grim Natwick Productions, he was often given complicated drawings that involved not just red and blue pencils, but often yellow and even green on top of that!  One day he saw on the paper a shadow that had been drawn with a strange soft bat-like shape that seemed out of place.  So Doug did his best and cleaned it up nice and crisp, which was a big mistake.  He handed in his work, and Grim took it “in his long fingers…” while Doug waited nervously.  Grim then scowled and burst into the [manager’s] office, pointed at Doug and shouted “FIRE THAT YOUNG MAN!”

Animation Block Party is a weekend long festival of international, local, and classic animation that runs the gamut.  I could write all day about it but my electricity would be shut off.  Be sure to check it out next year!