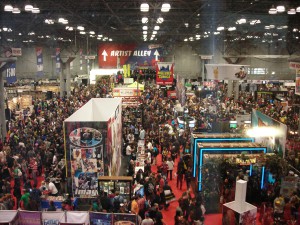 The New York Comic-Con is a major event for New York’s pop culture. Although it caters first and foremost to Comic Book fans and artists, it makes room for related pop culture criteria, including film and animation.

This was my longest trip to the NYCC thus far, primarily because I wanted to catch a few of the panels, many of which are animation based. But while waiting between panels, I had plenty of time to explore the comic sales/trading, the Artist Alley, and Book Fair. I was primarily in attendance on Saturday and Sunday.

Starting with the 2010 Convention last year, the NYCC merged with the New York Anime Convention. Although I saw no issues first-hand, later recollections showed disappointment with the merging of the two conventions. In fact, this year, most of the Anime-con was held on another floor, above the main convention area in the Jacob Javits Center. I suspect the merging of the two conventions doubles the attendance of the overall event, making it more crowded and overwhelming, not to mention a tad claustrophobic.

In keeping with the “geek” culture of Comic-books, the convention always attracts costumes and fans cosplaying as their favorite characters. And not just comic-book heroes and villains, but also film and animation characters. I swear, there were just as many costumes as you would find in the Greenwich Village Halloween parade. I couldn’t begin to tell you how many people I saw dressed as characters from Naruto or Adventure Time. 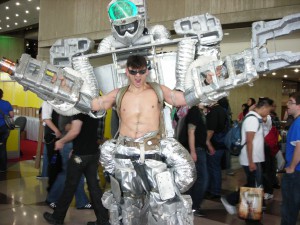 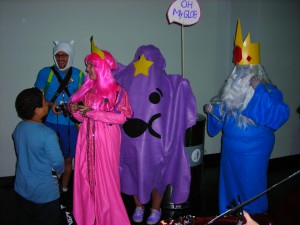 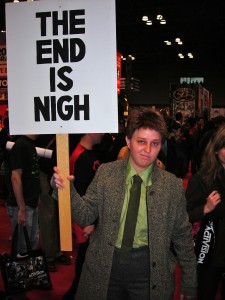 Of the panels I was able to attend, three of them are animation based.

Superjail, Adult Swim’s hit series, had a panel which attracted quite a wild crowd. Among the panelists were creators/executive producers Christy Karacas and Stephen Warbrick, and writers/voice actors Christopher McCulloch and Richard Mathar (an interesting note, both McCulloch and Mathar voice pairs on the show; McCulloch the “gay inmates”, and Mathar “the twins”). 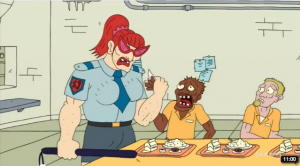 The audience of the Superjail panel felt like what you’d find at a Kiss concert. It seemed like anyone would go crazy if any part of the show was mentioned or debated. The crew talked only briefly about working on the second season, and how writing the show works. The panel ended with a Q&A, during which many audience members proclaimed their love of the series, and asked the creators of their inspiration. However, the questions that really stood out were: a man asking the crew to tone down the show’s violence; another wanting to know Superjail was, as he had no idea why he was there; and another guy who simply wanted to belch into the microphone. Weird questions aside, another highlight of the Q&A was a “Shake” from Aqua Teen Hunger Force showing his support. 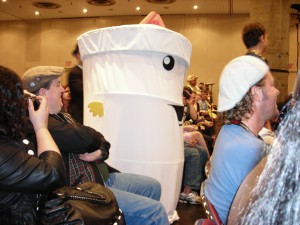 After the Q&A, the creators presented an unusual yet rewarding treat: New York animator James Sugrue, who works on the show, was brought up on stage. And while a muted episode played, James performed all the dialogue, character voices, and a few sound effects in a Mel Blanc-like tour-de-force. I think its safe to say that James’ fan base grew quite a large amount that afternoon. And in the eyes of the author, James Sugrue grew into a giant. 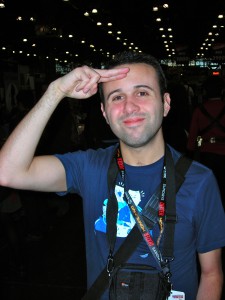 Mike Judge and the return of Beavis and Butt-Head

An even more excited crowd (though not as costumed) turned up for Mike Judge’s panel on the return of the world-famous Beavis and Butt-Head. We did receive Beavis and Butt-Head popsicle-stick masks and t-shirts (I took the subway home carrying a “Beavis” mask!). Introducing the panel with a surprise appearance was Luke Wilson, a collaborator and friend of Mr. Judge. After introductions, all attention was turned towards the screen. 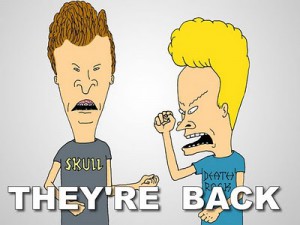 The audience was treated to a lengthy preview of two episodes of the new B&BH series, the first audience to have that privilege. I’m sure someone recorded this preview and posted in on YouTube, but it looks like B&BH might make a smooth transition in the 2010’s. Everyone was mostly excited to see the giggling pair in new adventures again, having barely aged a day in the last 15 years. They are still very much-loved by a lot of people. After the screening, a lengthy Q&A proceeded, with many fans taking the opportunity to impress Mike Judge with their impersonations of B&BH characters. Mr. Judge himself appeared to be quite amused and even impressed by most of these impersonations.

The highlight of the last day of the convention was a dual panel of Cartoon Network’s Adventure Time and Regular Show. 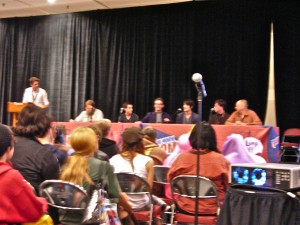 Adventure Time, already a cultural favorite as evidenced by the countless costumes it inspires, is represented by: creator Pendleton Ward; voice of “Finn” Jeremy Shada; and (big surprise!) Tom Kenny, voice of the “Ice King” (not to mention a famous sponge and countless others). Regular Show is a unique program that combines surrealism with situation comedy, and always has a surprise for the audience. It is represented by: creator/voice of “Mordecai” J.G. Quintel; voice actor Sam Marin; and voice of “Rigby” William Salyers.

While waiting on-line for the panel, I was impressed by how many costumes I saw of Adventure Time‘s characters. It made me appreciate just how impressionable the show is, seeing people not only dressed up as Finn, but Princess Bubblegum, the Ice King, Marceline, and even one-episode characters. Once inside, it was clear this crowd was just as excitable as Superjail and B&BH. The panel opened up with a Regular Show-themed puppet performance advertising the shows currently on Cartoon Network, which drew amazing applause at the slightest hint of anything from either program. Then on to introductions. I swear, Pendleton Ward and J.G. Quintel must have appeared like Elvis Presley to this audience (and I say this as a fan of both shows). Quintel’s introduction prompted the audience to chant Mordecai’s infamous “OOOOHHH!” (such an amazing sound).

The usual questions were asked by the panel director, such as what influenced the creators, where the characters came from and such. Pendleton Ward was even asked what it felt like to create such an amazing, fantastical world (and I regret to say I couldn’t make out his reaction). Quintel’s answer to this question makes Regular Show seem like a very personal creation, such as the characters and their mannerisms coming from college friends and jobs he held down before working in animation. One question that stood out was for 14 year-old Jeremy Shada, and whether or not he was worried about outgrowing his voice for Finn. Ward and Jeremy both proclaimed that Finn would gradually be aging as the show goes on (something the Simpsons don’t even do!). 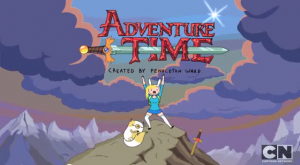 Fans really want to see Fiona and Cake again. And it looks like they will.

Finally the Q&A, which I have to say went off without a hitch. No one wasted their questions like before, and there were even some I would have asked myself (especially one pertaining to Regular Show‘s use of 1980’s pop music). I have to say I am surprised no one asked Tom Kenny to perform one of his many other famous characters. I wonder if the “Ice King” is becoming more popular than the rest of them (!!!). There were two questions that seemed to be repeated: 1) Are we going to see Fiona, Cake and the gender reversals of Adventure Time again, which was a quick “yes”; 2) will there ever be a crossover between Adventure Time and Regular Show, which was shot down with a “no”, though how sincerely I can’t say. I wouldn’t mind seeing a crossover, in spite of the main differences between the shows. 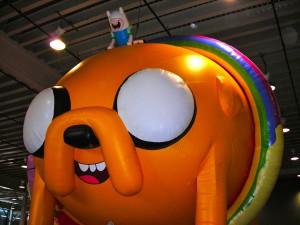 This was certainly an interesting experience this year. I am particularly eager to hear others’ opinions of the event.