Museum of the Moving Image Reopens to the Public 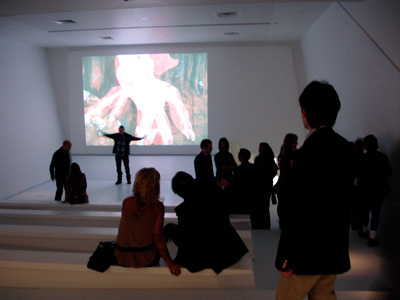 A few days ago, the Museum of Moving Image reopened its doors to the public, after an extensive renovation.  It would be easiest to say that it absorbed Kubrick’s 2001 space station.  A conglomeration of sloping planes form the exterior and interior, with chairs, steps, lights, and more.  Adjust your organic white balance before attempting to navigate.  And for anyone who has seen the concept designs for the new museum… they are SPOT ON.

But let’s move from form to content.  In the new half of the museum, there is plenty of space for socializing, whether it’s chit chat or kids’ animation classes.  And you are greeted by a super-wide screen animation by Chiho Aoshima.  “City Glow” (2005) is a wonderful 2d animation that has everything you love about AfterEffects, Flash, and toki dori.  Her design is similar to “Kirikou and the Sorceress.”

Moving past that upstairs, you make an abrupt transition from white to black.  “Real Virtuality” is a collection of video installation art that combines 3d glasses, motion tracking, PS3 controllers, and a cathedrals.  It is a must see for interactive video artists.  Check out “Augmented Sculpture” (2007) by Pablo Valbuena, who is the source of all those crazy building projection viral videos.  And, if you are ALONE, check out “RealTime UnReal,” (2011) a spectacularly shiny 3d glasses pieces that changes with your movement.

Never fear, hardcore MMI fans.  The old exhibits are still there, with new displays and touch screens.  The biggest new attraction (in my opinion) are the prosthetics used in “Black Swan.”  (What am I talking about, you ask yourself, but oh yes… there was some crazy special effect stuff going on that didn’t involve CGI).  And Yoda is still there… could use some touchups though.

I got tired from the crush of people and the free wine, so I sat down on a polygonal plastic frame cushion and started sketching.  There were just so many interestingly dressed people I couldn’t help it.  (Mostly black clothes).  Someone pointed out to me Albert Maysles, who directed “Grey Gardens.”  And I’m sure Bloomberg was around there somewhere, being tired after all that snow plowing in Queens.  I’m actually really excited, because the neighborhood was already slightly gentrified with the new arts high-school and Panera bread, and the new museum can only help.

As we all know, there are tons of fun new animation screenings coming up at the museum, and I can only guess that there will be plenty more.  It is a wealth of material information on the animation and film making process so I urge you to visit the new Moving Image!

Editor’s note:  The grand reopening is going on all weekend long and this Monday, January 17 (MLK day) has free admission.  There are a ton of animation screenings and events there and we’ve posted a bunch of them on our online calendar.