Posted by dayna on Feb 10, 2011 in Feature Articles, Interviews | No Comments 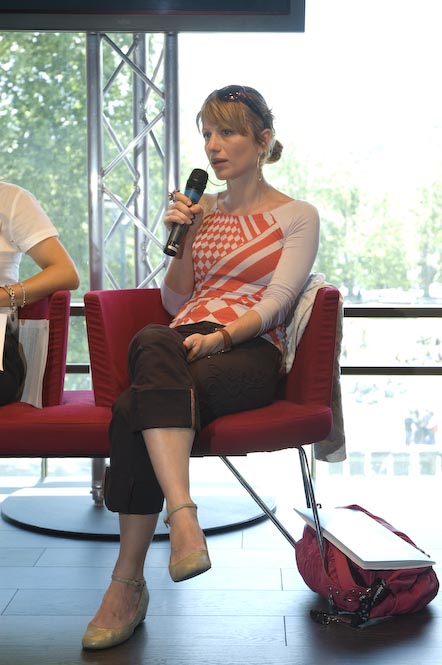 Longtime ASIFA-East member, Biljana Labovic, the subject of our February interview, originally comes from Yugoslavia, where she studied Graphic Design and Illustration at the University of Arts. Since 1997, when she moved to New York to study animation at the School of Visual Arts, she has worked on many commercial animation projects, and with acclaimed independent animators, including Faith and Emily Hubley, and Bill Plympton. Now putting all those years of training and experience to work for herself, as an artist, animator, filmmaker, teacher, producer (and more), Biljana recently sat still long enough to answer our six questions. So the least you could do is sit still too, and enjoy.

1-What was your relationship with animation back from when you were in Yugoslavia? And, how did you end up studying animation at SVA in NYC?

I grew up in a country with a lot of animation tradition, but despite the Zagreb school and its legacy, there was no place or school to study animation in the entre country in the early ‘90s when I was embarking on the art school journey. You have to remember that this was also the time of the beginning of what soon became a civil war in Yugoslavia, times of lots of turbulence and huge crisis. The Zagreb Animation Festival (which had great coverage on national TV, and lots of animated shorts were shown on TV on a regular basis) also started to experience the crisis, less filmmakers were willing to attend it. The very few individuals who were making animated films were coming to illustration and cartooning, or sometimes film.

I was studying graphic design at the University of Arts in Belgrade in the early ‘90s, and was flirting with illustration at the time. In my final year of college, I decided to make an animated film, which conflicted with the school’s program. The main problem was that there was no place or equipment that I could use to shoot my film on 35mm. I knew pretty much nothing about animation or film, but thought this was the perfect time in my life to at least try and experiment. There was a professor in another department, Rasko Ciric, a very prolific artist who made a few animated films, who helped me a lot. I completed hundreds and hundreds of little water colored paintings, and went to him asking how I can put this together into a film. I met a few enthusiastic people along the way and eventually contacted a small studio in Belgrade, which decided to produce my film called Non-Stop. This was really the beginning of my animation journey.

The film went to a few festivals, and it gave me that boost and confidence that this was something I had to do. I decided that I would learn more about animation, and in 1997 I won an international competition organized by UNICEF and SVA to come and study animation in New York. Needless to say, it was a-dream-come-true scenario.

2-Was your first professional work in the industry for Emily Hubley? And, how would you describe the way Emily works and how it influenced your approach to the process or medium of animation?

I started my professional career as an illustrator of children’s books while I was still in Yugoslavia, and continued to do that the first few years when I came to New York. While I was studying at SVA, I met a lot of wonderful animators. Emily Hubley was teaching there at the time, and I used to sneak into her class since my freshman year. Emily eventually became a good friend and my mentor. Her work is poetry, something very close to my heart. One of the first projects I helped her with was a fantastic film called Hedwig and the Angry Inch, and soon after I met her mother, the legendary Faith Hubley. What happened is hard to explain, but those who met Faith probably know what I mean. She was a true force of nature, and I was immediately drawn into her world of mythical creatures and endless hope and beauty. I was so excited when Emily asked me to work on Northern Ice, Golden Sun, which unfortunately turned out to be Faith’s last film. I worked with Emily on a few more occasions, and to this day, she remains to me one of those people that you meet, that make you want to go straight home and create something beautiful right away. There is no reason not to.

3-How long did you work for Bill Plympton and how did your responsibilities evolve from when you started there to when you left?

I met Bill in 1999, a friend was making a documentary about him and I helped on the shoot. That same day I got an internship and soon started painting cels on his feature film Mutant Aliens. Being a big fan of Bill’s work from the MTV days when I was still in Yugoslavia in the late ‘80s, it was an incredible honor for me to have been able to be part of his films.

For a few years I worked on and off on different projects and after I graduated from SVA in 2001, I started to be involved in productions more and more. In 2004, Bill had an idea of making a film that was hand-drawn and colored on paper, but using computers to put together instead of the Oxberry camera. This was a big step for him and his art, and after discussing the possibilities and work methods, we made that transition. This film was Guard Dog, which later that year got an Oscar nomination. This was a breakthrough for Bill’s production process and someone needed to be in charge of it.

Bill, being so prolific and incredibly fast, kept me busy for many years. The greatest thing about the job was that it was never boring. I think we split the roles evenly, I knew my strengths and he knew his, so it worked perfectly. Then Idiots and Angels came along, and this was going to be the first feature film that Bill wanted done using computers to color the images and compositing. With Bill drawing every single drawing on paper, and a team of 3 full-time employed artists and several interns – it was quite a challenge to multitask and jump from one stage of the production to the next all the time.

For me, the most exciting part of that production was the coloring process. Bill wanted textures and shadows that looked like hand-drawn/painted, so basically each still had to be treated like a painting. We made a short film Shuteye Hotel, as sort of a test for this process that kept evolving as we were working on Idiots. At some point, even with Bill’s pencil shading on the drawings, when they were colored, they still looked flat. Then we decided that each still should be shaded with (digital) brushes the same way you would use the brush to paint on canvas. This, of course, was a very painstaking process and with our small budget for the film, it was hard to find artists who were exceptionally good at this. So in the end, I decided that the three of us – my wonderful assistants Lisa LaBracio, Kerri Allegretta and myself would do it all ourselves. Later we brought in another two great artists, Jeremiah Dickey and Aaron Hughes, who also did an excellent job painting.

Overall, I can say that I did almost everything that an artist in a small animation studio can do. I supervised productions, set up pipelines, I made art, learned about the business, festival, distribution… and I even got to walk the Oscar red carpet back in 2005!

4-What is one important thing Bill Plympton taught you, either about the art or the business of indie animation that you plan to apply forward in your career?

I could write a book about what I’ve learned from Bill, but probably one of the most important things is the discipline. To work diligently, to always learn and try to reinvent yourself, not get discouraged by obstacles, to live with your mistakes, know when to stop and not spend years perfecting your film that will never end up being perfect, most likely.

5-Since striking out on your own what projects have you worked on and in what roles?

I’m now taking the time to develop my own animated project (collaboration with musicians), which is long overdue. Currently, I’m also working on a couple of nice freelance projects, both music videos, one of them directed by our own ASIFA member, Delphine Dannat, who moved back to Paris last year. There are also a couple projects in development, but it’s still early to talk about them. I’m dreaming to team up with a couple of friends and start a small studio one day.

6-How is the Dash Shaw feature The Ruined Cast coming along? And, how are you dividing the producer duties between the other two producers?

Dash is still working on finalizing the script of The Ruined Cast, which will be an animated feature film. Dash has directed The Unclothed Man in the 35th Century A.D, an IFC Original Web Series based on his graphic novel, but The Ruined Cast will be his first feature film. We hope the script will be ready very soon and sent to investors to raise funds for the production. So far, the project has gotten a lot of attention and some funding from the Sundance Institute, but clearly we need a solid budget to start the production.

My job in this film as the animation producer really begins when we are ready to start the pre-production, hopefully in a few months. I will be overseeing the production in a small studio in Brooklyn. The other two producers, Howard Gertler and John Cameron Mitchell, are coming from the indie film world and they are responsible for bringing the film to the film labs, pitching markets, raising funds, etc. What I like about this team is that everyone has a clear role in the process and great passion for it.