This article was written by Susan Godfrey and was reposted from the animation blog,  Go Get ’em Girl. All photo credits to Jazzmine Beaulieu.

This last Friday night Matt Lee hosted his fourth Midsummer Night Toons animation festival, a fantastic event he’s single-handedly produced annually since 2009. Generous to this community with his efforts and attentions, Matt Lee showcases his self-curated collection of independent animated shorts to a New York City crowd that seems to only get more and more receptive.

A good time with happy hour drinks, great films, and great people, loyalty and support seem to be the name of the game with this festival. The show’s recurring cast of filmmakers have their names rolling through one another’s credits, and past filmmakers, along with filmmaker’s friends and coworkers, pass out fliers and work through the crowd handing out MNToon’s swag. Mr. Lee also seems intent on paying it forward by always including in his lineup an outstanding thesis film or two from his alma mater, The School of Visual Arts.

This year’s films were:

A film by new player James Sugrue “Life By A Thread“.

Sophomore film by MST lady filmmaker Chrissy Fellmeth “Not Without My Mustache”.

Having gone to the festivals each year I’m sure there’s some sort of writerly sports metaphor for the satisfying experience of watching as players’ skills get exponentially better. With Midsummer Night Toons’s small selection of films and its returning cast of filmmakers, viewers get the opportunity to both grow with the creators’ styles and feel like they’re in on the jokes. Like watching indie bands and recognizing breakout talent—you just know you’ll get the opportunity to claim you knew these guys when…

Every year I am more and more convinced that Matt Lee has founded his own school of genius. It may be “in crowd,” but it may also be that these talented and self-motivated artists have found a way to independently develop their style, humor, and timing and vaulted themselves ahead of the predictable and tired mainstream, all the while cultivating an audience to appreciate it. See? Genius.

The talent, audacity, and gumption in this group of filmmakers should not be ignored. The best of these films’ humor is fresher than anything seen at a score of festivals, wilder and edgier (when edgy actually meant “different and cool” and not “has tribal tattoos and tits in it”) than anything getting airtime since MTV did animation. 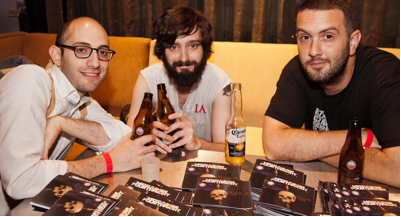 The event that Matt Lee decided to create to showcase this talent is an inspired celebration of people who don’t just talk but actually do. In a field where the default position seems to be sitting on one’s ass sour-graping about the industry, or worse, tearing down the efforts of people who continue to produce and succeed, Midsummer Night Toons is a concentrated dose of relief from the same old dreck.

Congratulations to Matt Lee and all participants in MSNToons 2012; you’ve created an NYC animation institution and you put on an outstanding show.