Posted by Tristian on Oct 9, 2013 in Feature Articles | No Comments

Splitting categories in computer animation is becoming a fool’s errand these days.  But you have to define genres somehow, and printed programs with thumbnails can set off the right neurons.  I’ve been cleaning out a lot of closets, and when you collect tickets and promo postcards, it can seem easy to quantify.  After I saw MetroCAF 2013, the 11th annual Metropolitan College Computer Animation Festival, I thought I’d run a thoroughly unscientific data analysis on why I always thought of MetroCAF as a Computer-Generated-Imagery (CGI) festival and not hand drawn, even though it’s named for computers.  Behold my pretty graph.  Just on my experiences, which I only have evidence for four years, it’s still clear that sometimes you have to change your definition of ‘computer’ animation as more and more types of software become available to students. 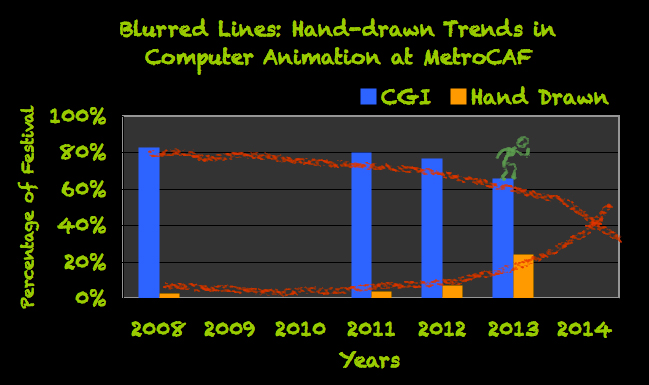 My definition of “CGI” short films would be something that clearly has been modeled and rendered in a virtual space, probably Maya or Mudbox or Cinema 4d… Pixar 101.  But for some reason I count CGI animation that have been composited onto live action video as it’s own category, which is why CGI never purely dominated in my books.  I guess I am starting to define hand-drawn as animation characters that can been created with a pencil/stylus… paper and materials not included.*  If we pulled all the data from this festival I guess it would really show how animation software became more satisfactory for the “traditional” animation student over the last decade.  6 years ago it was easy for traditional purists to denounce the frigidity of digital-paint (see my chart’s Chalkduster font circa 2004) while today it requires a special talent to create Photoshop paintings with many combinations of digital brush preferences at your disposal (my PS CS4 customized brush for red lines is adequate for now).

Projected curves aside, I would still say “CGI” is gonna outnumber anything that looks hand drawn at the computer festival in the future, which I think it should.  As an audience member I’ve associated MetroCAF with the chance to see early creative innovations in computer-generated-imagery.  Furthermore, this could be a data analysis of the jury’s preferences after all, so maybe we should hold them accountable for an organization’s identity.  Will they hold on to a computer festival that highlights the sheer number-crunching power that CGI animators can use to create virtual worlds, or will those talented with manipulating a stick into drawing characters find more reason to claim the prize?

*Tom Sito taught me the first stylus computer was the Styalator from the 1950s!!!

Why Do I Study Physics? – Xiangjun Shi (RISD)

This is the 1st time MetroCAF is open to RISD students, and the first time RISD wins an award!

And here are some of MY favorites…

A truly creepy story from the deep south, complete with monsters, untamed bush, and tentacles that teach you what cinematic timing is supposed to be.  Sealed the deal with spot on voice-casting, character design reminds me of Aeon Flux.

One of two “video gamey” CGI films in the festival.  This has a lot of strong world building in addition to a nice visual look.  The simple plot creates a hook for the viewer, who hopes it will continue.  But you just get a moment.

A synesthete, confusing colors and tastes, attempts to eat a bowl of soup in this flat, oddly colored motion graphics piece.  Simply animated to grasp feelings that many people are not hardwired to understand, the animation takes a few quirky millennial turns.

Thank you Jaime Ekkens and Scott Sindorf for another great festival, and congratulations to Steve Rittler for being named one of next years co-chairs! 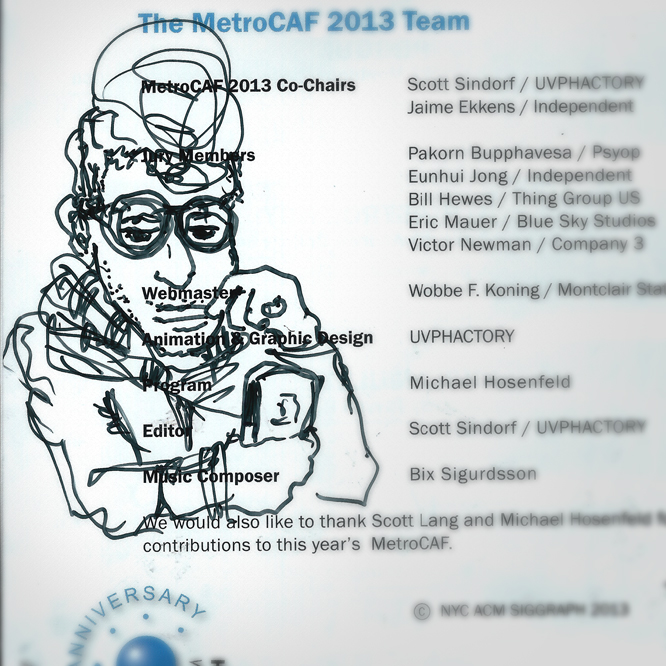