Our good friends at Rooftop Films have once again offered ASIFA-East a discount to each screening in their entire summer series.  If you haven’t gotten a chance to make it to one of their screenings yet, be sure to take advantage of this offer.  I’ve been to several of these screenings and they are a great way to spend a summer evening.  They are on rooftops throughout New York City, and usually feature music performance and a bit of bbq before the screening.  They have a number of animation related screenings throughout the series, the first of which is this Friday, May 25th.  Katie, our email newsletter editor, will send all current members an email with the discount code in it.  Please be on the lookout for the email.  You will need this code to get the discount.

Here’s the info for this Friday’s event:

Next Friday we have an array of great animated shorts on the dark side. Pens and pencils and puppets and more. Between them, this year’s selected animated works use just about every tool in the drawer to conjure their visual magic—from the coal-dusted industrial twilight world of Clockwork, to the rotten fruit and brittle husks of Blanche Fraise’s gloomy forest, to the psychedelic light show in 38-39c. But it’s not just the way these short films look. It’s also the way they move: some are lilting. Some are staccato. Some are controlled chaos. Together, they play like the movements of a symphony. Watch and listen. 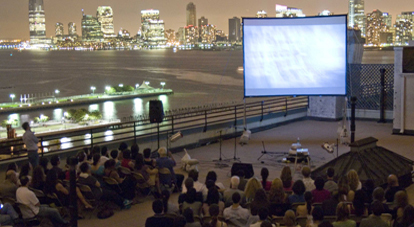 Rooftop Films is a New York based non-profit whose mission is to engage diverse communities by showing independent movies in outdoor locations, producing new films, coordinating youth media education, and renting equipment at low cost to artists.  Rooftop Films is known internationally as one of the most dynamic film festivals in the world. In 2011, we screened more than 25 feature films, almost all of which are New York, U.S. or World Premieres. We showed over 150 short films in themed programs which have received accolades for being smart, entertaining, and filled with astonishing movies. This combination of brilliant, original programming and stunning outdoor venues makes Rooftop Films one of the best-attended film festivals in New York. We have also begun to expand to other cites. In recent years, Rooftop screened films outdoors in Los Angeles, Toronto, Philadelphia, Pittsburgh, Camden (Maine) and others. At Rooftop Films, we bring the underground outdoors.