Matt Groening and Lynda Barry at BAM: Love, Hate and Comics – The Friendship that Would not Die

Posted by David Langkamp on Feb 15, 2015 in Feature Articles | No Comments 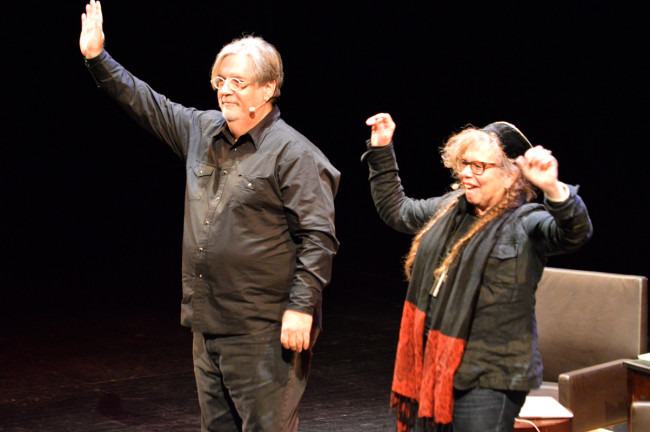 As the event’s title suggests, Matt Groening (The Simpsons, Futurama, Life in Hell) and Lynda Barry (Ernie Pook’s Comeek, The Good Times Are Killing Me, What It Is) took the stage of the historic BAM Howard Gilman Opera House on Thursday night to tell stories of creative inspiration, artistic struggle, and their decades-long friendship with each other. A packed house of animation and comics fans thrilled to learn of Groening’s earliest inspirations for the members of the Simpsons family, including a projected photo of his mother with a beehive hairdo that bore a striking resemblance to Marge Simpson’s architectural coif. Groening may be the more familiar name and bigger audience draw, but Lynda Barry more than held her own on stage; in fact, with her lively presence, humorous asides and anecdotes–especially the tale of her first nude modeling experience, which she memorably acted out on stage–she practically stole the show. 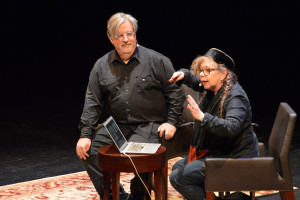 Groening and Barry told the story of their first meeting forty years ago while both were studying at Evergreen State College in Olympia, Washington. Groening heard a rumor that there was a female student on campus who had written a fan letter to Catch 22 author Joseph Heller, and he knew he had to meet her. The letter-writer was Barry, but she admits to writing her name as “Ingrid Bergman” on the envelope to lure Heller into opening it (even though the return address was clearly a campus dormitory). “In the letter, I wrote, ‘Will you marry me? Signed, Lynda Barry.’ And he wrote back, ‘Dear Ingrid Bergman Lynda Barry, I would like to marry you, but I don’t want to live in the dorms.'”

Groening was duly impressed, and gave Barry the chance to submit cartoons to the school paper, of which Groening was the editor. Barry tested Groening’s open editorial policy of accepting “almost anything” that was submitted, turning in stranger and stranger work; some of it, by Barry’s own admission, was pretty awful. But Groening accepted and published it all.

Groening and Barry each spoke highly of their professors and mentors at Evergreen. Barry’s mentor was her drawing teacher, Marilyn Frasca, who asked the seemingly simple question, “What is an image?” This question has informed Barry’s work to this very day, and even appears in the pages of Barry’s book What It Is. Groening’s experience of his mentor, Mark Levinsky, is memorable for a slightly different reason. “During a review, he said to me, ‘You do what you do adequately well. Is it worth doing?’ That question STILL haunts me.”

After graduating from Evergreen, Groening and Barry each set to work on their own comic. On Thursday night, the audience was treated to a live reading from both. First was a selection of Will and Abe cartoons from Life in Hell (“Important Questions About Monsters” being my personal favorite). Groening and Barry reading a comic strip out loud to a live audience might seem like a risky choice, but it brought the house down. Barry also read from her own comics, several short stories featuring her character Marlys. This opened up a discussion of childhood influences and references within both Groening’s and Barry’s work. (Will and Abe are Groening’s actual sons, one of whom was in attendance at BAM Thursday night.)

Barry is especially intrigued by the openness of children’s creativity and wondered aloud why people are so afraid to draw after a certain age. “Adults don’t draw for no reason anymore. Why is that?” She discussed the work she is doing as a professor at the University of Wisconsin-Madison, trying to reconnect adults to the freedom they felt as children to create and draw. Some of the exercises she shared with the audience: draw sixteen cartoon characters from memory, 30 seconds per drawing. Draw a picture of Marge Simpson…with your eyes closed. The resulting drawings by her students were projected on stage, and the effect it had was amusing and amazing in equal measure. No matter how rough or limited a student’s drawing skills, or how hampered they were by imposed rules (time limit, closed eyes), the drawings were still readable and charming. This helped to underline one of Barry’s main point: drawing is another language. And it is a language we all share. 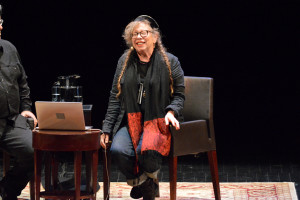 To end the evening, Barry and Groening answered questions from the audience. Here are a few highlights. 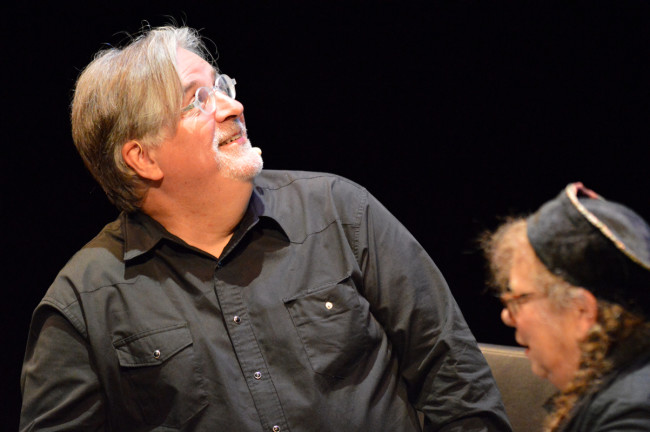