Posted by dayna on Dec 8, 2014 in ASIFA Events, Industry Events | No Comments 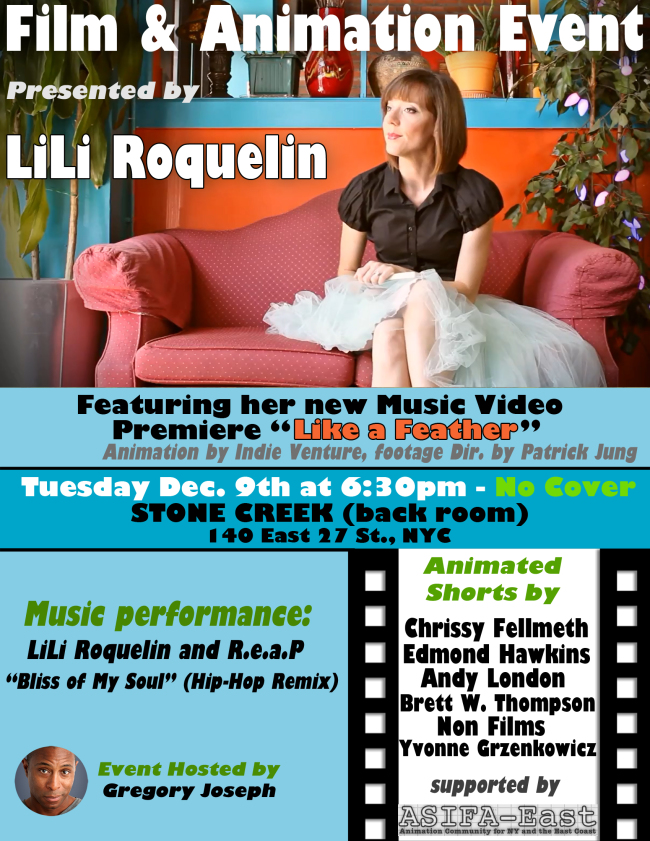 Please join us for a night of film and animation featuring the premiere of Lili Roquelin’s new music video Like A Feather on December 9, 2014. Animation shorts by local filmmakers, including quite a few ASIFA-East members, will be screened followed by Q&A’s! Please see the below press release for all details.

Singer-songwriter LiLi Roquelin is releasing a new Music Video “Like a Feather”. It will Premiere during a Short Films & Animations Event that she is presenting Tuesday December 9th at STONE CREEK 140 E 27th St in Manhattan (a few blocks from Empire State and Flat Iron Buildings) from 6:30pm to 9:00pm. LiLi Roquelin’s achievements include TV&Film song placements, Awards, Radio airplay, over 60 Interviews and Press features, special Performances [such as “God Bless America” a capella in front of FOX5, NY1, and more; Opening Act for Bruce Sudano (producer for Michael Jackson Dolly Parton and his wife Donna summer)]. Her Songs were approved on the Final list of the 57th Grammy Awards’ Ballot in 7 Categories. She has reached over 1 Million views on Youtube, with 690,000 views on her official Youtube channel. Visit http://liliroquelin.com for all information and electronic press-kit.