Posted by Emmett on Apr 26, 2012 in Feature Articles, Viewseum | No Comments

Warning: or just a suggestion, we insist you watch the film before reading on. Really take in the effect of the film.

Life In Transition is John R. Dilworth’s opus. Described as “…a visual and symbolic journey depicting the continual transformations of life from birth to death to re-birth”, Life is a personal film that draws heavily from Dilworth’s life, career and knowledge. Not bad for a short film either.

The film follows a character called the “Daisy Man”, set against a desert backdrop reminiscent of Salvador Dali’s surrealist paintings. The character’s face pervades the beginning of the piece before floating backwards to give life to his creations (including a few familiar faces, “dirty” and “cowardly” too).

Beneath the surrealist imagery, Dilworth tells a very personal tale. The tale at first glance is of a creator giving life to his art, but gradually losing control of his life and the world around him. Every silly and bizarre image that animates has a meaning that carries it along. For example, the Daisy Man becomes pink and elastic for a few moments about one minute into the film. This is meant to show the character’s free-spiritedness and youthful energy. 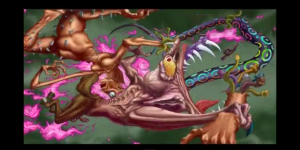 After celebrating his very life, the film turns dark upon the presence of a giant urchin, which stabs the Daisy Man. There are a couple of 9/11 references here (images still fresh during the film’s production), such as paper flying everywhere, and several floating clocks set to 9:11. The Daisy Man is now injured and inside his head, we see demons distorting, lusting, and self-destructing. The ending shows a collection of thorns, from which daisies bloom all over. The Daisy Man is reborn, his smiling face pervading the screen once again.

Life In Transition took home Best In Show at ASIFA-East 2004. The film may well be Dilworth’s most personal work, and it won several more awards at various festivals.