Posted by Tristian on Apr 22, 2014 in Feature Articles | No Comments

On March 29th, at the Scholastic Theatre in SoHo, NY, Mark Shapiro (director of entertainment brand marketing for LAIKA) gave a special presentation of the movie Coraline. It was “LAIKA: Behind the Magic,” part of the New York International Children’s Film Festival. The movie Coraline is a 24 FPS stop-motion animated feature, based on a Neil Gaiman novella of the same name; Mr. Gaiman changed my life with the Sandman graphic novel series. Amongst its all star voice-cast are Dakota Fanning (I am Sam) as Coraline, Teri Hatcher (Desperate Housewives!) as her mother, and John Hodgman (Mac vs. PC) as her father. 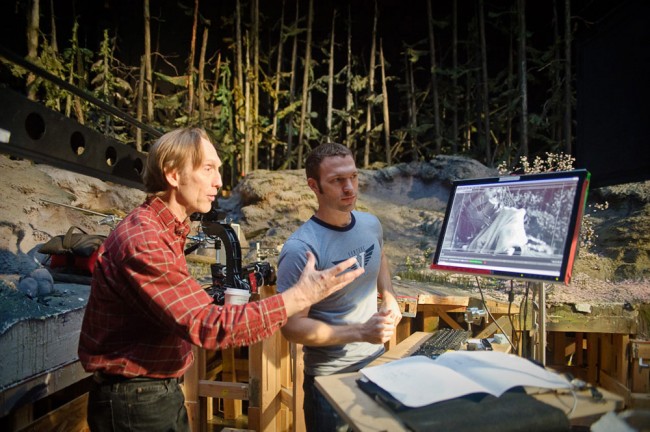 Henry Selick, director of “Coraline” on the left discusses with an animator [photo cred NYICFF]

The opening title sequence was faster than I remembered. This screening was not in 3D stereoscopy, but its titles are clearly designed to be viewed that way. I had just come off a volunteer shift with the festival, and had refreshed myself in an old-fashioned way with my friends Tom-n-Jerry, a few blocks away. The credits open over a mysterious skeletal hand re-crafting a doll with needles and thread. A giant needle pokes out into the audience as buttons are sewed on for eyes.

We are introduced to the blue haired, yellow rain coated Coraline. She is a spunky girl who entertains herself with a dousing rod, as her 1990s internet bubble blogging parents set up their new house in the country.   [There is a cameo of a puppet version of Joe Ranft, Disney/Pixar story man.]  Mom and Dad want a natural setting for their daughter, a change from the city, and it will help them with their writing about gardens. As Coraline explores the area and her new neighbors, she foolishly steps into a fairy ring of mushrooms.  I like to think this simple act signals the beginning of all Coraline’s troubles. Especially since her new friend Wybie (named after “Why were you even born…”) points out that her dousing rod is made of poison oak. The next day, fighting off a nice hand rash that makes me shudder, Coraline discovers a tiny door behind the couch. When no one is looking, the door leads to a magical new world, a duplicate of her own new house. In it is Coraline’s Other Mother. The Other Mother offers her delicious food (while Coraline’s real Mom has terrible cooking skills). But the price for a life full of magic and wonder is letting the Other Mother sew buttons into your eyes, giving her control. We follow Coraline as she passes back and forth through the door, eventually realizing the trap and fighting her way through magical games to freedom and happiness with her original family.

As the credits rolled, Mark Shapiro bounded onto the stage to explain the enchantment of stop-motion animation. “Always, always take behind-the-scenes photos,” he said as he showed us clips and slideshows of the production process. We saw the sets of the wooded forest behind Coraline’s house, as it was split up into block sections, ground at waist level and animators towering over trees 1-2 feet high. LAIKA’s studio itself is 2.5 times the size of a football field (according to various sources, Coraline was staged in a 140,000-square-foot (13,000 m2) warehouse in Hillsboro, Oregon). Mark showed us a time-lapse video of the making-of a fantastic sequence of paper cut kangaroo-mice directed by animation director Brad Schiff (an NYU graduate). They spun and multiplied against a blue screen (a scene less than 15 seconds that took 6.5 weeks to animate but was cut from the final film). In a few brief moments of the production video that marched furiously forward in time, we saw a nicely bearded Portland animator sleeping by the camera rig. We learned that the black cat that disappears behind a sign post in the final scene of the movie was 1.5” tall. 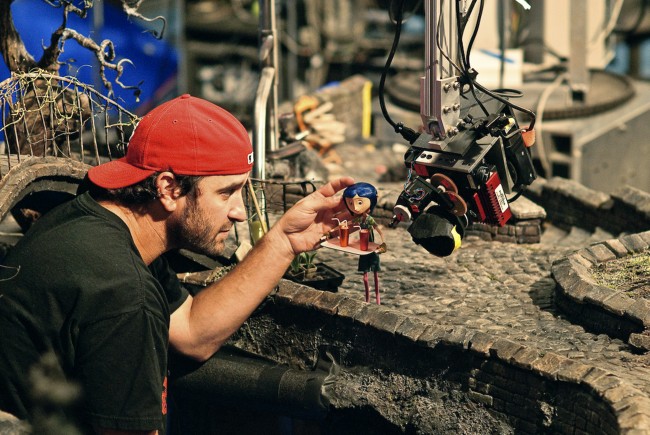 LAIKA’s latest movies, from Coraline to ParanNorman, to Boxtrolls, sculpt their puppet’s faces in Maya and send them to a 3D printer (Polyjet matrix systems). In Boxtrolls alone there are over 55,000 faces. LAIKA does NOT do clay animation. (Really? Apparently they may occasionally use clay for cheese). Mark Shapiro also showed us great raw footage of Eric Leighton animating in real time. His scene was of the spectacular sing-off between two burlesque singer-acrobats past their prime. Eric had a ‘confidence monitor’ set up nearby to check the previous frames of animation against what the camera saw. In fact, he said that he always checked the puppet last, after the lights, set and secondary action. Eric wore a head lamp, just like a miner, and showed us the back of the puppet set, which was filled with tape marks. Just like a dashed line diagram you might use to animate a bouncing ball, so were there tape marks EVERYWHERE. Needles turned on dials to set specific gauge marks. A trap door was rigged with multiple car jacks. All of the rigs that held up characters and sets were photo-shopped out of the movie. Some gauge marks were shrunk down 400% and Eric needed double magnifying glasses like a jeweler just to see the GODDAMN tick marks! He warned us to never, ever touch the 3D cameras by accident. As he checked the spacing of the puppet against the rig markers, he held up the bottom of his shirt in his teeth so it wouldn’t get burned by the lights (proving that animators are capable of having nice abs). After all the checking and setting up, he used a tiny needle inserted into a hole (which would be removed in post) to make one tiny move: the follow-through of a great bosom. 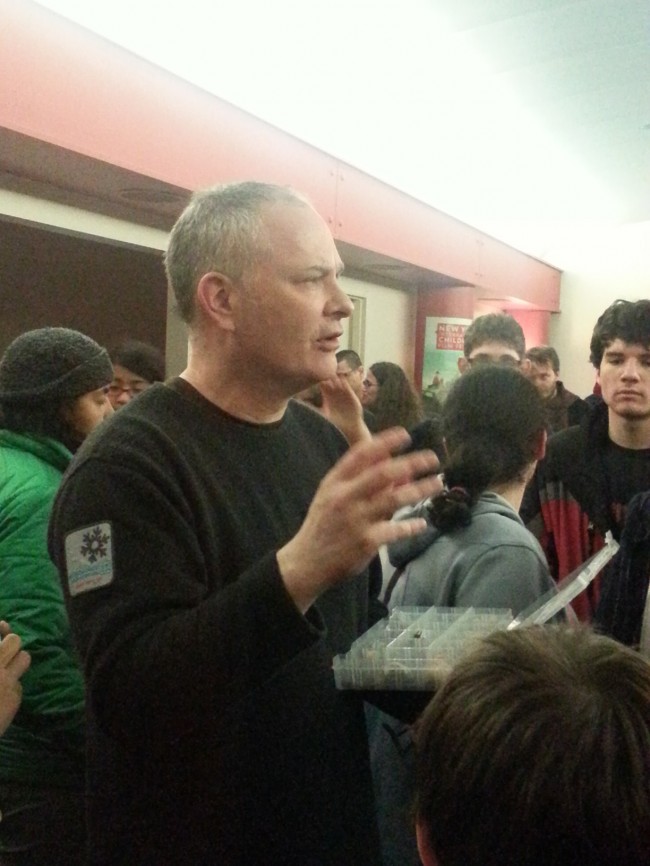 After this it was time for questions from the audience. One person discovered that the magical tunnel that grows out of the tiny door was made of a corrugated material, like a flip book. Another discovered that LAIKA still uses ‘tie-downs’ to hold the puppets feet to the floor, even if they always damage the set (remedied by taking reference photos).   The choice of materials in puppet creation (like a miniature pair of jeans) was heavily influenced by Portland culture: always try to be as clean and organic as possible (LAIKA is based in Oregon). We learned that the spider web in the climactic battle scene was 8 feet tall, and that animators had to be suspended Tom-Cruise style in mid air to do their work. Mark Shapiro claimed that only 5-10% of the film was “CGI-animation,” (raindrops were made of glue, while flames were digitally painted traditional animation).  All adults had to concede their questions to the children in attendance.

NYICFF also gave us a sneak peak at LAIKA’s new movie Boxtrolls. Incredulously, it centers around the magic that happens when a lactose-intolerant boy eats cheese in a Fromage-loving society. Real D 3D and Dragonframe were just some of the software used to create the film. The trailers we saw had some interesting country modern muffled music that wouldn’t be out of place in Portlandia, and there was rolling action in Tim-Burton-esque sets (made possible by many many rigs that were removed in post). Winnie, a curly haired love interest, had her curls delicately flounce in ballroom dancing, and an adorable four-year-old provided some voice-over. Everyone, kids and adults alike, was really excited by the new footage.  One guy even hooted every time the name “Boxtrolls” was mentioned! 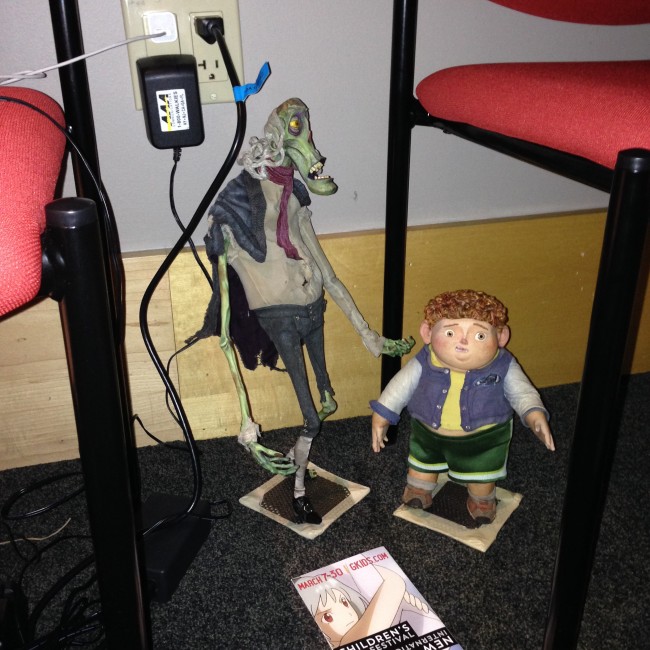 Puppets get ready during the screening, awaiting the audience.

Unfortunately the time for questions came to an end, but Mark Shapiro graciously opened up his time to us in the theatre lobby, where two original puppets from Paranorman were on display. He would also answer more questions and let people touch face-masks from Paranorman himself! Mark was soon mobbed by kids, fans, and animators. Some British animators from Sprout TV even hopped the pond just to attend this event and the NY International Children’s film Festival; they are big fans of Henry Selick  and seemed interested in learning more about where the money was flowing in Hollwood, in regards to these new stop-motion films. (Henry Selick is seeking new funding after his new animated feature was dropped by Disney.)

As I gathered my coat and things to get ready for the next day’s volunteer work at the festival, some college age kids were excitingly exchanging advice about portfolios and job prospects after graduation. They seemed really excited about their blogs, and loved following SVA’s Tumblr. They would look at each other’s work, and to my surprise they lavished praise upon it along the lines of “That guy’s work is so good he doesn’t even have to go to college!” I was feeling naturally gregarious so I inserted my own two cents to their conversation, which was probably something foolish about working together to make sure their own and their classmates thesis films were in top notch shape for all the festivals after they graduate. I guess I got caught up, just in the lobby, in the magic of LAIKA’s animation production.

PS – The NYICFFestival might be over, but there’s always next year, and I’m sure there will be another ASIFA-East Discount!