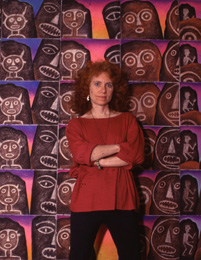 I still find it difficult to wrap my head around a world where you might be lucky to have one opportunity a year to see multiple animated films.  This is what Linda Simensky (V.P. of Children’s Programming at PBS) described at the Karen Aqua retrospective and Q&A, held by ASIFA-East on October 11th.  She coveted her attendances of The International Tournée of Animation, where she would get to see about 20 animations, and since the 1980s, Karen Aqua almost always submitted one film.  In this extremely new age of YouTube, these facts are hard to swallow, and after watching about 12 Aqua animations in a row I was exhausted by the devastatingly elegant displays of talent and art.

The screening covered Aqua’s work from 1982 to the present.   They were divided up into three sections and introduced by the three panelists: Ken Fields (her husband and musician) introduced her early work, Frank Mouris (independent animator and long time friend) introduced some pieces about rural/urban environments, and finally Linda Simensky introduced Aqua’s last films before her death.  Debra Solomon (independent animator), also organized the event and made opening remarks.   At the end, there was a photo tribute animation (by Lisa Krafts, independent animator) to this great artist, compiled from donated photos from animators and friends all over the space-time continuum.  Every speaker ruminated on their individual influences on Karen, and related how they were affected by her and her work.

“Vis-à-vis” is an animator’s reflection on her own artistic passions and desires for life.  Immediately noticeable would be her simplistic drawing style: facial features appear only when needed, and in fact, only what is exactly called for in each scene is created.  Karen Aqua also must not have elbow-bones…  “Yours for the Taking” combines a surrealistic/pompously walking china cup (stop motion, with 45 kiln fired positions) with a variety of drawn animation, both in the background and on the cup itself.  “Kakania” is my favorite, a jazzy chaotic tribute to cities with a score to match.  “Perpetual Motion,” as a museum opening party piece, is something I would desperately want to attend today.

“Twist of Fate” happens to be my first important connection with Karen Aqua.  It is her experience of cancer, carefully shaded with colored pencils and made with the gravitas of a “Nature” documentary.  Obviously it is imbued with the emotion only a cancer patient can know.  Seeing this film a second time has given me a new insight, after my own recent diagnosis of Bell’s palsy from Lyme disease.  One of my role models, David Levy (former ASIFA-East president and creator of a successful family short) gave me his well-wishes, and suggested that at least my problem could inspire an animation.  While this idea does not exactly sit well with me, “Twist of Fate” represents a fate I can only barely comprehend, and its completion a strength I hope to emulate.

Many people came to support and remember Karen Aqua, adding a more distinguished tone to the usual ASIFA-East audiences.  They clustered and buzzed together at the bar after the show.  I gathered that Karen liked to go hiking with friends and swimming after animation festivals.  Her drawing skills instilled intense jealousy in non-drawing animators (healthy creative rivalry I’m sure).  Around my second drink I had an emo-moment, and couldn’t stop thinking about how fun Karen would have made post-ASIFA bar hopping with her crazy Mardis Grad outfits.  Debra Solomon offered consolation and told me that Karen ‘was of this world that created ASIFA,’ and that is why so many of these people were eating all together that night.

Several audience members commented on Aqua’s mastery of negative space in her animations.  This probably helped create the strange sense of character and story that led Linda Simensky to define Aqua’s films as neither abstract nor narrative.  I am still amazed that I discovered her art too late.  But, I did remember her “Imagination” “Sesame Street” animation, and I am glad that it helped shape my young creative mind.  If you too have a fond memory of Karen Aqua, feel free to post your thoughts below.