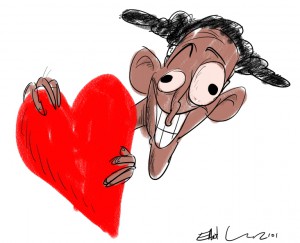 John Dilworth tells us of this screening that includes is his new short “Rinky Dink”.

NEW YORK – SCENEPR has announced the films that will be screened at their third annual Love Actually: Short Films about Love, Sex & Romance, on Valentines Day from 7-10pm at the historic Millennium Film Workshop in New York City, NY.

Join us for this non-competitive film event featuring 11 short films from 12 brilliant independent filmmakers. The evening will begin with a pre-mixer with wine & cheese and end with a Q&A with some of the people involved in making the films being showcased, including former Oscar Nominee, Animator John Dilworth.