Councilman Jimmy Van Bramer of the 26th District of Queens, and Freddie Adelman, Director of Exhibitions of the Smithsonian Institution Traveling Exhibition Serivce, making opening remarks for the Muppet show

I recently picked up a two-pack of “Muppets in Space” & “The Muppet Movie” from a $5 bin in K-mart.  Definitely a perfect find in a barren place.  It reminded me that the Muppets had an animation appeal to not just kids but all members of the family.  Gonzo came out to Kermit as… an alien, and Kermit just wrinkled his fuzzy little face in a way that both worked in the story but still was a sly nod to the audience.  Good times all around.

“Jim Henson’s Fantastic World” at the Museum of Moving Image has a great and valuable exhibit on all things ­Henson.  This would include storyboards, concept drawings, posters, and of course, the puppets themselves.  There is an educational video that simultaneously screens a short film of Henson’s and the corresponding storyboards.  As you look over his simple characters and framing, you realize that Jim really trained his skills in a ton of advertising work.  You could probably call him a Renaissance man, since he did most of his own voices, wrote his own jokes, and sketched out specific mechanical designs for his puppets.  As you wind your way through the museum, you’ll see that Jim Henson had a remarkable sense of color, and you can see his art evolve from low brow coffee commercial humor, to the intricately detailed “The Dark Crystal.”  Almost all of his creations are covered in the exhibit, which ends with a homey video of interviews with the artist, which you can watch while sitting on a plush toadstool.  It reminded me that there are vast amount of Muppet Show footage I haven’t seen, which means there is much more to understand.  Fortunately, the museum will be screening many of his films, some of which will even have live guest speakers!

The best guest at Thursday’s Muppet party was Mayor Bloomberg.  He was very suave with the hostess, cracking jokes and encouraging us to dim the lights to save on electricity.  He even slicked back his hair with a fuzzy orange hand and asked for a Metro-card swipe so he could get home.  Oh, haha, I guess it was just a puppet. 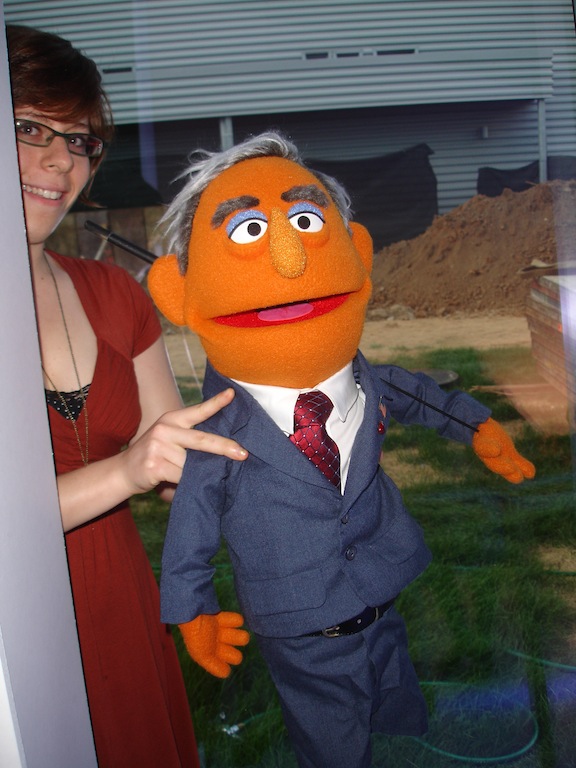