It’s Too Art for TV!

At the wise suggestion of Kaitlin Sullivan, Rob Yulfo and I visited the Erebuni gallery a day before the opening of the fifth annual “Too Art for TV.”  We rounded the corner of Union and Metropolitan and at the kind direction of a stranger made our way to 158 Roebling. There, we stood in front of a building with a shark painted on its’ façade. I entered to find a small crew bustling about, putting their finishing touches on what would be an inspiring display of the work of 40 artists working in the Animation Industry.  In one corner, one woman worked on aligning the labels to perfection, while in another corner, a woman worked on lining up a giant frame.

Liz Artinian, the curator and creator of Too Art for TV took some time out of her busy schedule to discuss with me the history of Too Art for TV. She explained that as far as being a curator goes, she started off with the Stay Gold Gallery. Ambitious and eager to form a venue in which her friends (all members of the animation community) could exhibit their work, she took it upon herself to form the first Too Art for TV as an end of season exhibit for the Stay Gold Gallery. The event was met with great success and she was welcomed to plan the event again the following year. She described the first exhibit as being a bit cruder – since there was less exposure, there were less people involved and less in the way of specific tastes. Since then, Too Art for TV has skyrocketed in the span of merely 5 years to be one of the events of the year for everyone in the Animation industry.

Aside from speaking with Artinian, I got to meet Sasha Kamini Parmasad a writer by profession, displaying her video art and poetry this year at Too Art for TV. We bonded instantly over our mutual heritage, both of us being West Indian of Trinidadian descent.  I was then introduced to Chris Beaumont the creator of Cubee Craft, which has been a blossoming project to turn anything and everything into cube shaped creatures. As Parmasad enthusiastically explained, part of the genius of Cubee Craft is that it is inclusive, it allows others to participate using templates on the website to create their own Cubees. I also shook the hand of Kaitlin Sullivan the astute junior at The School of Visual Arts who not only dedicated her own time to helping set up the event, but also was considerate enough to extend an invite for a sneak preview to me!

After gathering enough photos, Rob and I took our leave only to return again roughly the same time the next day. This time, the gallery space was packed to capacity. With the back doors open, and a stream of people sashaying in and out, Rob and I managed to make our way in. It was a who’s who of NY animation. I ran into good old Emmett Goodman, Brett Thompson, Pilar Newton and her finance, Lena Green, Dave Levy, Donald Poynter, Marty Abrahams, Chris Ortiz, Jenelle Bringer, Tristian Goik, John Dilworth (he stole my beer!), and Alma Sheppard-Matsuo, just to name a few.  The upstairs area housed the sole bathroom as well as the screening room.

The videos in the screening room were on loop and each one brief and abstract. My personal favorite of the film shorts screened was a minute or so long conversation between 3 water drops discussing one of their new poor excuses for a boyfriend.  I wondered why there were no independent cartoons on display; surely, some of the applicants had created non-abstract films. Tristan suggested that the selected pieces were so chosen because of their more artistic feel and that it fit in better with the concept of the gallery space.

The crowd started to dissipate by 9:15 and soon after we all headed to grab some food and then wander over to The Knitting Factory for the after party. Despite rumors of the after party having a cover charge it was also free and just as fun.

Thanks to the visit the night before, Rob Yulfo was able to take some photos, but because of the glare off the glass of the framed images, we could not capture everything. Either way, these are all works worth your time in person. The gallery is on display until April 23rd  and while there’s no longer any free PBR, it’s still free to get in. So take a look, be inspired, and be on the look out for next year’s submission process. Artinian explains you don’t have to be a seasoned animation professional – even interns have had their work displayed at the gallery – just create something neat to look at.

Editor’s note:  Apologies in advance for the cropping of the thumbnails here.  They were created automatically with the blog software.  To view the entire image, please click on it. 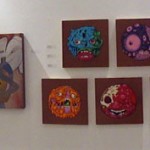