Posted by Tristian on Feb 4, 2016 in Interviews, Uncategorized | No Comments

NYPDQ tackles the dirty streets of New York and the work of two hard-nosed detectives as they clean up the city one case at a time.  Except one of them is a bird so he’s more “hard-beaked.”

The other is a rat.

In fact, this concrete jungle is full of animals.

NYPDQ is the teaser full of possibilities from Augenblick animator Virgile Bage and serves as both a love letter to the buddy detective comedy as well as the vibrant city of New York. Bage only just stepped foot in the big apple some 12 months ago but this Belgium native and Luxembourg transplant has long awaited a move to city that never sleeps. Working on a myriad of projects in Luxembourg from commercials to the animated feature, Song of the Sea, he grew quite the affinity for Augenblick Studios in Brooklyn. His remote work for Titmouse granted the necessary connections and soon he was on his way at long last.

Bage was immediately taken by the lively nature of New York and began documenting his new surroundings in a sketch book. It is with these sketches he ran the idea past studio founder, Aaron Augenblick, and began formulating what would become NYPDQ. With guidance from Augenblick, Bage began animating this teaser for NYPDQ as somewhat of a pet project. Taking special care in his realistic portrayal of the city, he used his phone to record the audio later used at the beginning of the teaser. 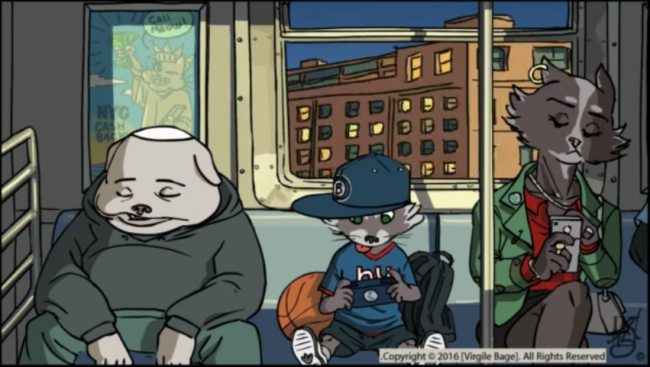 With action beats inspired by Akira and influenced by the likes of Starsky and Hutch and The Wire as a comedy, the NYPDQ teaser hits on all counts. Bage has captured a vibrant and energetic New York somewhat akin to Ralph Bakshi’s Fritz the Cat set in modern times. Bage is deeply focused on illustrating each borough as an accurate depiction to their real world counterparts seeking the NYC natives for reference.

Alongside a well-researched environment, Bage is looking to really delve into the detective characters  and collaborate with writers to flesh out their back stories. He is eager to develop their chemistry as a duo and explore his bird and rat as individual characters.

There will be more to come with NYPDQ as Bage ramps up the project but from the look of this teaser it will be well worth the wait.