Interview with Bill Plympton and David B Levy and MoCCA!

Tomorrow night the Society of Illustrators is hosting an event supporting New York animation’s own Bill Plympton in his most recent project a biography/art of book titled Independently Animated: Bill Plympton -the life and art of the king of indie animation available from Rizzoli Publications

I had the great pleasure of having an on the spot interview with Bill Plympton and David Levy about Bill’s recent biography and art of Plympton book. I recently got my own copy and can’t say enough about how substantial and beautifully put together the whole book is. A few short weekends ago I attended the Museum of Cartoon and Comic Art festival at the lexington avenue armory right near SVA. This festival has the real spirit of new york independent art and comics and it was a very suitable place for Bill and David to display the book, sell some dvds, and get a good buzz going. -Not to mention there are quite a few new york animators that dabble in the comic arts as well. Here’s the conversation I had with Bill Plympton and Dave Levy about the book published by Rizzoli Press: 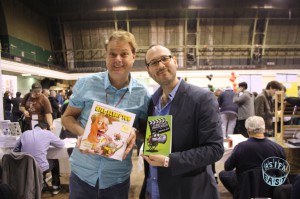 Katie Cropper: So tell me about your book how long it took you to write, why you wrote it, the whole low down.

Bill Plympton: I was at the San Diego comic con with Ralph Bakshi about three years ago – Ralph was promoting his book by Rizzoli publications and he had a huge response from it. So, we went out drinking -Ralph and I and the editor at Rizzoli. The editor said “Ya know Bill I’ve always loved your work why don’t you do a book?” and I said “Well, nobody’s ever asked me to do a book”  to which he said “maybe we can do one”- and I really loved that idea. About a year ago he called and asked if I was ready to do the book, and I was – but I needed to find a writer. My writer choices were between Amid Amidi and David.

KC: Why did you go with Dave?

BP: Quite frankly Amid Amidi really wanted to do this book with John Krisfalusi so he had moved onto that, but I had heard the John K book isn’t coming out now, which is interesting. So I’m really glad we got David and he did a great job. The book is basically me telling stories of my life, my career, as a kid drawing on everything,  and my life growing up in Oregon. After I finished a section I’d give the transcript to David and he would then polish it up and add some gravitas and some humor as well.

KC: Its interesting to see David’s hand in the writing, the whole thing reads as very comfortable and conversational which would be your style of talking and writing, its very fun.

BP: We worked really well together, he left my voice in there. The whole writing process took about 6 months, there are about 30,000 words. They cut out a few of the pieces that I did for a couple reasons, One- they thought they were irrelevant, which they were. Some- they thought were a little self serving, which they were as well. So when it was narrowed down it was 30,000 words.

KC: So who picked all the artwork that is just, bursting out of this beast of a book?

BP: That was Chris McDonnell, he came to my apartment for a week. I had all the artwork in my apartment. He went through books, boxes, drawers, anything I had laying around. It was really interesting what he zeroed in on. There is one scene from my feature The Tune, he very cleverly picked this up – he found a picture of my family and he realized that I stole that picture for the tune. Chris really did a great job he really did he research and knows design. I think there were only maybe 3 or 4 drawings that I said no I don’t want to use those drawings. So all together with the writing and the design and proof reading the whole book took about a year to compile.

-turning it over to Dave I ask a few questions about he work on the project.

KC: So tell me about working with Bill and how do you undertake the task of editing Bill’s personal stories

David B Levy: So it was great when Bill gave me this opportunity, I know the stories that he’s told and I knew a lot about him -as a lot of us do that are in New York. I didn’t want him to repeat a lot of stories that he’s told many times over so my goal was to give him a list. They were 120 questions on his life. I took those questions and organized them into chapters that would cover basically the whole book, when I gave him those documents and Bill really just answered these questions. That was pretty much the shell or the rough book. He really did stick with that. There were also parts where he would stray from the outline I would get these meandering stories from Bill’s life. There would be a story about a dog following him on his bike and I would think to myself ‘oh this is great!, what am I going to do with this?’- and I would have that moment of panic. As I would get all this material together I would see how one group of stories could go to chapter one and it could flow nicely like that.

KC: I liked that kind of stream of consciousness you get with some of these stories it works really well here.

DBL: I think it is a linear book but someone had called it meandering, and meant that in a nice way, and I think it works well. Its like the way some memories unfold in that you are going to leap back and forth between thoughts or stories but its not random. Sometimes when you’re trying to find a point you have to step back to go forward to just put the story in context. The writing takes that approach. It was a lot of fun, actually I had chapters were made to weave that more together with some freedom. So when I had the other chapters where I wanted more structure I got it. But the most fun i had was when the structure went all over.

KC: Any other tasty nuggets?

DBL: Oh I do have something a little controversial or funny. The one thing that we really disagreed on was that Bill wanted to include at the end of the book a list of his all time favorite films and list of his least favorite films.  I didn’t really want be redundant with some his favorite directors and films because he references them throughout and I was worried about offending with the list of least favorites. But the reaction from people is that they love the lists and think is the most interesting thing in there.

I want to thank Bill and Dave for the great conversation, it was very off the cuff and casual chat here are some dates to look forward to in support of the book:

The Museum of the Moving Image event on May 27th,

Society of Illustrators event on April 27th at 6:30PM

The book is available on Amazon.com here

ALSO here is a small sampling of New York animators at the MoCCA Fest I’m sure I’m missing a few jems but heres a dandy round up: