In Memory of Buzz Potamkin…. by Candy Kugel

Posted by Katie Cropper Klein on May 10, 2012 in Feature Articles | 2 Comments 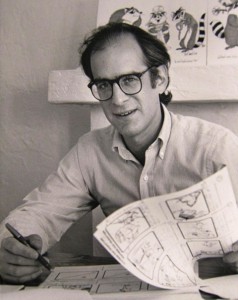 Buzz Potamkin, one of animation’s most beloved producers on both coasts, passed away from pancreatic cancer on Sunday, April 22nd.

Buzz, always interested in film, left Columbia University for a job as an “editor” at Stars and Stripes Forever, the hippest animation studio in New York.  While there, he quickly sized up animation production, and seeing the talent of designer/director Hal Silvermintz, left with Hal to form Perpetual Motion Pictures in 1968.  BBDO was their biggest client and with them they created seminal Clio winning commercials for 3M, DuPont, Bell Telephone and the Wall Street Journal. Perpetual became one of the 3 biggest commercial studios in New York in the 1970’s, adding Hawaiian Punch, Burger King, and other consumer products to the long list of commercials.  In 1977, Hal Hoffer and Mordi Gerstein were added to the studio, which then numbered more than 30 employees.

I (Candy Kugel) came to Perpetual Motion in 1970 as an art student for a summer job.  I was called a “gofer” but I was really what would now be called an intern. For $25 a week, a promise to stay out of the way and to stay the summer, Buzz hired me.  Later on that summer, they were behind schedule on a Soft ‘n Dri commercial, and because it was a union studio, I was not allowed to do “bargaining unit work” (work that union members would normally be paid to do).  But there were decals to place on the already-painted cels to represent the cans’ labels.  The character was an octopus, so there were about 6 cans of Soft ‘n Dri on screen at one time and moving throughout the commercial.  This was my task.  To carefully place the decals (2 colors–pink and black) on the blank cans.  Buzz asked me to stay late so it could go to camera (this was the last thing to do to the cels) and he would pay me “overtime”.  I called my night job (I ushered legitimate theater) and said I couldn’t make it, and then tried to figure out what overtime on $25/week would be.  At 3 am, carrying the job to camera, it seems I’d made a raw deal.  But come the end of the week, Buzz said I would no longer be making $25, but he put me on staff, making $85/week (meaning I could quit ushering at night) and that was percentage-wise the highest raise I would ever get!

After that summer, Buzz hired me every time I was in New York between semesters.  He always did the stand-up thing.  The year I graduated was a tough time in animation, so there was no work for me.  Perpetual accepted a cheap sales film for Courtauld’s Rayon, which Hal was going to do by himself.  Very soon after being awarded the job, they got a big Wall Street Journal commercial, which had no scene cuts, metamorphic scene changes, and a very intricate drawing style with shading.  It was 60 seconds long and would take Hal all summer to layout.  Buzz said that if the ad agency for Courtauld’s accepted my design, I would have a job for the summer and could join the Union (a prerequisite for most work in New York then).  They did, I did.  I remember going to the agency with Buzz in a cab and he said if all this worked out, I could be a master animator by the time I was 28.  It all seemed impossible!  But, 7 years later, by the time I was 28, Buzz had promoted me all the way to director!

After the Courtauld’s job, Buzz pursued and received a contract with NBC to create two 1-minute animated political cartoons for the newsshow “WEEKEND” produced by the head of NBC News, Reuvan Frank.  Because Frank only cared about the message, and not necessarily about the quality of animation, it became my thing– and the reason I became the longest employee of Perpetual Motion Pictures.  I always said that NBC paid for my animation education.  Every month we had a story conference, and I made a storyboard.  Then Buzz and Hal would go to NBC and pitch it.  I had one week for board and layout, 2 weeks for animation and color and the end of the month was for the sound work, mix, film to tape sessions. And it would start all over again.  As a producer Buzz was terrific.  He placed himself between the client and the creative.  He’d say to the client that he didn’t draw a line and would discuss it with the director/designer/animator — whoever!– on the side and reach an understanding.  He knew how to get the best out of his employees and schmooze the client.

WEEKEND was on the air from 1974-1979, Saturday night when Saturday Night Live wasn’t on (they used to take the last Saturday of the month off and we shared the time slot).  And then it was over. SNL took all the Saturday nights, but Buzz managed to get the Berenstain Bears Christmas Tree special in 1979.  And we were off!  Between 1979 and 1983 we made 5 Bears specials and Strawberry Shortcake in Big Apple City.  This was quite a coup because no studio in New York was making long format programming consistently at that time—that was only for California studios.

While we were making the Bears’ Easter special and Strawberry Shortcake, we had more than 70 people on staff– working on both the specials and an incredible number of commercials, brought in chiefly by Hal Hoffer.  I remember thinking what a well-oiled studio we had– an entire floor of a building on Fifth Avenue and 45th Street– the best talent in New York and then another crash!  Buzz wanted to continue with the TV shows (no immediate payout, but long term investment) and the Hals wanted to continue in the lucrative world of commercials.  They split up– Hal Hoffer and Hal Silvermintz formed Perpetual Animation and Buzz formed Buzzco Productions.  They split up the studio:  Buzz took Vincent Cafarelli and me as his creative team and Marilyn Kraemer as his personal assistant.

At Buzzco Productions we made the final Bears tv special and the Wacky Wallwalkers Christmas Special, but more importantly, Buzz saw the potential in cable television.  Buzz asked me to meet with clients from Time Warner/AmEx to discuss a music channel they were about to launch on the new cable system.  This was the first Top of the Hour for what would become MTV.  Buzz could gamble and I was game.  We did work for all the upcoming cable networks– USA, MTV and some others that failed.

In order to garner more TV work, Buzz would often go to LA to pitch ideas– Vinny and I were there to continue production while he was gone and to help him with his pitches.  Then one time he came back and announced that he had accepted a position with Taft Entertainment, and would be moving to the West Coast.  In lieu of our severance, we could keep the business going.  Vinny, Marilyn and I did and formed Buzzco Associates, and Buzz was pleased we’d kept his name.  While he was in LA, we continued working for his new company, Southern Star– we did pitches for him, did the title sequence for Teen Wolf– boarded a couple of his Storybreak series.  He’d visit often and he was always encouraging.

When he and his wife, Rosie moved back to New York, we continued to keep in touch.  Whenever asked, he’d say he was the eponymous Buzz of Buzzco!  In fact, after Vince passed in December, he was still encouraging me with the film I’m making, and to keep going.  This is what he wrote about my being sad about Vinny–  “OK, now it’s my turn. You’re strong, and you had 40 years. We all miss everyone, and those who we were closest to the most. Vinnie would not want you to be sad for the rest of your life; he’d want you to remember the great times and bask in that glow. And go on with your life, using your talents to further the great work you did together.”

So, OK, it’s now my turn.  Buzz gave us all a great example as a producer, as a human being. He wouldn’t want us to be sad.  Learn what he had to offer and remember the good times.

But he left us too soon!