Posted by Katie Cropper Klein on Jan 17, 2012 in Feature Articles | No Comments

On December 1st, 2011, we lost animation veteran and ASIFA-East Founding Member, Vincent “Vinny” Cafarelli, who passed away peacefully in his sleep at age 81. 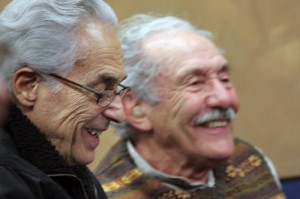 Our long time ASIFA-East Board Member, Michael Sporn wrote the following in his December 4th SplogPost:

“Vinnie” was a principal mainstay in the New York animation industry. He worked at Famous Studios on classic characters Popeye, Little Audrey and Baby Huey.

Later he worked at Gifford Animation on such advertising campaigns as the Piels Brothers and TipTop Bread. Margaret Hamilton provided the voice for Emily Tipp! You can go here to see 3 examples of the TipTop Bread commercials produced in the 1950’s.

Vince joined Stars and Stripes Forever, Inc, as their first employee upon his return from London, England where he worked with Pablo Ferro. Stars and Stripes was owned by producer Bob Staats and designer Len Glasser. They became the hottest boutique shop in the psychedelic 60’s creating such classics as: Chicken of the Sea “Mermaid”, Speakeasy, Sparklettes, and Ortho.

While at Stars and Stripes Vince worked with designer, Hal Silvermintz and film editor, Buzz Potamkin. Those two left to form Perpetual Motion Pictures, Inc. and after Stars and Stripes folded, Vince went to join them. There he was responsible for many ad campaigns and co-directed Strawberry Shortcake in Big Apple City and animated on all 5 Berenstain Bears holiday specials. He co-directed Deck the Halls With Wacky Walls.

Ultimately, Vinnie joined with Candy Kugel to form Buzzco Associates where he remained to the end. The two of them worked together for many years. You can check out a gallery of his art at AWN.

Michael also provides a sample of Vinny’s unique animation style in a series of drawings as shown in Buzzco’s film “Command Z.”  Click here to take a look and see the final film.

In addition, Candy has provided footage from Vinny’s January 6th Memorial, including some home movies featuring Vinny himself, which can be found here.

David Levy (ASIFA-East President 1999-2011 and Board Member) has a nice post about Vinny which you can link to here.

Vinny adapted and thrived through many eras of animation, inspiring all who knew him and his work, and will forever be an important part of Animation and ASIFA-East history.