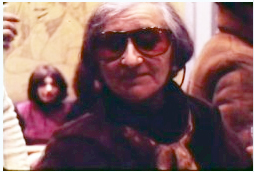 I met Tissa only twice and very briefly: once after being thoroughly awed and inspired by her at her MOMA retrospective: An Evening with Tissa David, Master Animator in 2003, and then again at the Academy of Motion Picture Arts and Science’s An Academy Salute to John Hubley just last year.  Over my long tenure on the ASIFA-East Board, however, I have been endowed with numerous suggestions about “the way Tissa used to do it when she was on the Board…”  I have always accepted this wisdom gratefully; from all the stories I’ve heard about Tissa, it would seem that she did all things with great forethought, direction, and execution.

She was a beloved mentor to many and she is greatly admired by those who are wise enough to study her work.  Many people in our ASIFA-East Community knew her well professionally and socially.

Please take a few minutes to read some of the notes and tributes below, written by some community regulars:

ASIFA-East Board Member Michael Sporn visited Tissa frequently over the last few weeks and has included John Canemaker’s 1975 interview for Millimeter Magazine on his splog today.  Check his blog in the next week or so for more information and reflection about his dear friend.

ASIFA-East Board Member Tom Warburton‘s blogpost about Tissa can be found here.

On David Nethery‘s blog you can find John Canemaker‘s tribute from 2006.

ASIFA-Hollywood’s Jerry Beck posted a piece on Cartoon Brew, which features one of her pencil tests and can be found here.

Pat Smith and Bill Plympton have a short mention on their blog ScribbleJunkies which can be found here.

Tissa will be missed.  Her work will continue to inspire.

Please feel free to post any further tributes to Tissa in the comments selection below!