Guest Blogger Tom Warburton: The Right Thing To Do 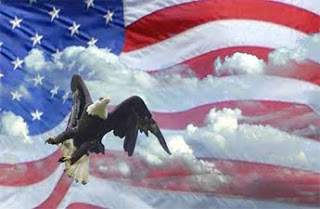 Friends,
I don’t need to tell you that our country stands at a crossroads.
The two paths before us lead in opposite directions,
neither one easier than the other.
The first, a road paved with greed and hate, is well trodden.
Those traveling this path care not for those less fortunate.
They see none but their own narrow, biased view of the world and think nothing of disseminating falsehoods and half-truths to get their way.

The other path leads to
THE ASIFA EAST ANIMATION ART AUCTION.

I think you know which road I’ve chosen.
And I hope you will, too.

It was back in April of 1991 when I went to my first ASIFA-EAST auction.
If you hung around the NYC animation scene back then, you probably remember me as the dashingly handsome, right-out-of-college rookie sensation that Buzzco Associates had the keen foresight to hire.
(Or, as the gawky slob in the Kutztown University sweatshirt who always smelled like stale beer and cigarettes)
I had recently been drafted by the ASIFA-EAST executive board
and was excitedly showing up at every ASIFA event that went down.
And this month, independent animator and ASIFA INTERNATIONAL board member David Ehrlich was running a fundraiser for the group: 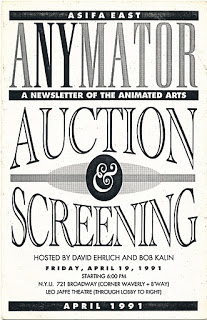 Here was the line-up: 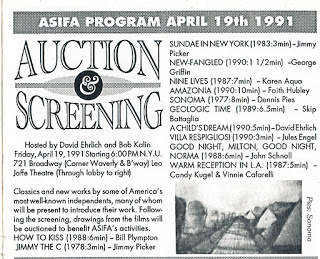 Old school, right?
These were FILMS.
By ARTISTS.
No one was trying to pitch a TV series.
Or sell a product.
They weren’t making cartoons.
These were people making art.

Were all the films great?
Hell, no.
Some of them were like watching (cel) paint dry in slow motion.
But all of them had a personal point of view.
All of them had style that came from an individual.
And most of those individuals were there in person to talk about their films.

After all the films were shown, everyone got to walk up on stage and check out original artwork from each of the films.
And here’s the thing:
Back then there was no digital film making.
Everything was done on paper or cel and shot under a camera.
(with exceptions for techniques like stop motion,
oil on glass, sand animation, etc etc).
So here were original pieces of art created by the artists themselves.
A 12th of a second frozen in time.
An actual piece of the film that you could hang on your wall.
But first you had to win it.
Because each piece of artwork was put up for auction.

Being on the board, I got to help Mr. Ehrlich hand out tickets to the winners, collect money and write up receipts.
I even won a set of 4 pencil roughs of from the 1970’s Raggedy Ann feature film drawn by animation legend Tissa David.
It was an amazing evening that made me feel part of a
wonderfully creative community.

Flash forward to an ASIFA-EAST board meeting a couple years later. 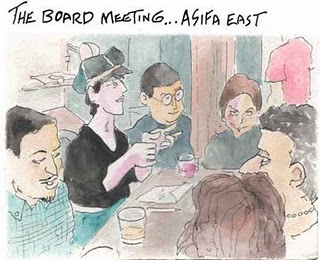 The discussion was about raising money.
In order to maintain the lavish lifestyle we board members were accustomed to while still catering to the needs of the NYC animation community,
there would have to be a bit more cash flowing into our coffers.

That’s when, after downing a shovelful of caviar washed down with a delightful 1928 Krug, I idly asked where the ASIFA-EAST auction had gone.
There hadn’t been one since the event I described above,
mainly because Mr. Ehrlich had long since moved to New Hampshire and was more involved with the international side of things.
I soon realized all eyes had leveled upon me.
At first I thought everyone was just mesmerized by my stunningly blue eyes.
I soon realized it was the same gaze that hyaenas lower upon wounded antelope.

And so we flash forward again, this time to November of 1995.
The date of the new (and by no means improved) auction.
Dubbed “THE ASIFA-EAST USED ANIMATION ART AUCTION”,
it is hosted and auctioneered by none other than myself.
I had spent the previous months herding cats…
I mean…
rounding up artwork from every animator and studio that would talk to me. 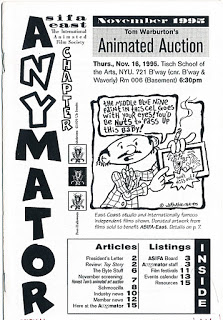 The event was an sooper huge success.
(if you don’t count my terrible auctioneering)
A wonderful variety of films were shown.
Folks got amazing artwork to take home.
ASIFA-EAST made over $1500 dollars.
And there were NO injuries.

It was later decided that the auction would become a regular event,
but we would only do it every two years due to the grueling nature of trying to get a bunch of artists to get us artwork on a deadline, and to allow for more new films to be made. 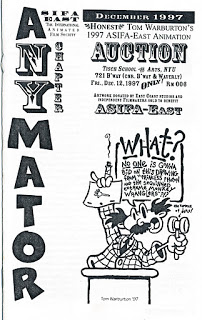 Over the years, the auction only seemed to get bigger and betterer.
We sometimes made in excess of $3500!
But with technology changing the way films were made,
there was very little art actually from films.
Digital ink and paint made cels obsolete.
(A loss for fans and collectors but a tremendous win for anyone who ever had to level cel paint)
So instead, we asked animators and show creators for original sketches.
Some folks did even better–
Nickelodeon’s Blues Clues was known for making one of a kind, 3-D character art framed in shadow boxes.

So on it went…
Every two years: 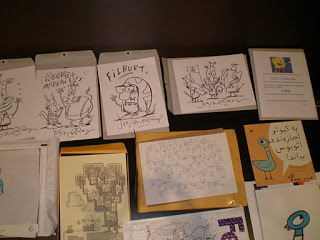 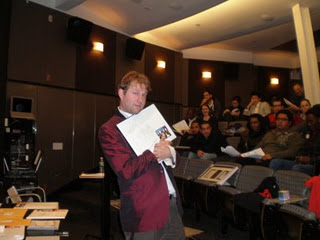 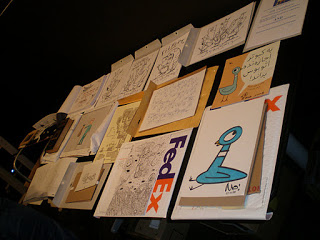 So now we flash forward.
This time to present day.
I’m still impossibly handsome.
But I’ve moved to Los Angeles.
Back in NYC, ASIFA-EAST President for Life David Levy has been violently deposed by the mighty Linda Beck.
Her sole reason for making the leap from lowly Secretary to President?
To make the auction a yearly event.
Like most evil dictators, she’s crazy.
I’d stop her if I could.
But I’m all the way over here in LA.

But you?
You should take advantage of her craziness.
Because this December 20th will be the first of the yearly auctions.
If you’ve never been to one, this is your chance to see great films, get amazing artwork by your favorite artists, and be part of a creative community.
If you HAVE been to one before, you know how fun it is.
Go again to help support ASIFA-EAST.

Just don’t rub it in that I’m not running the show anymore.
I can only be handsome in one place at at time, you know.