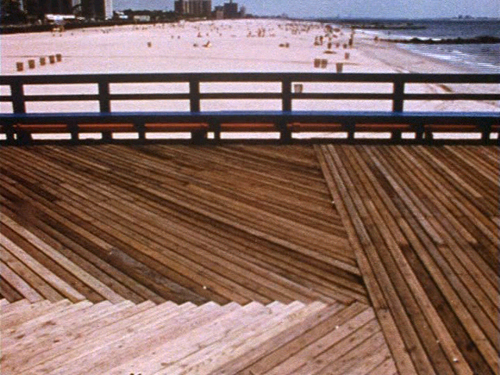 In the past few years, I have become aware of both the different types of animation styles and animators there are (and can be). Frank and Caroline Mouris are the kind of independent animators who work with (in a manner of speaking) a patented animation style of their own. Both their own films and their commercial work are defined either by its collage-animation, idiosyncratic narrations, or both. Their 1973 short film, Frank Film, won the Academy Award for Best Short Subject Animated Film, and is a perfect demonstration of their style. However, a recent ASFIA-East tribute to the Mouris’s work gave even more than what they are known for.

On Tuesday night, ASIFA-East held its last event until September, with the honor being handed to Frank and Caroline Mouris. I arrived early enough to make Mr. Mouris’ acquaintance. Before the show officially started, I overheard Frank discussing Caroline’s absence having to do with their side-business in dog-breeding. I found it both amusing and fascinating that the Mouris’ second career is animal breeding. Finally more people arrived, and the show got started pretty quickly. And of course, the show started with Frank introducing himself and his background, which included his discovery of animation through an impromptu college course. The first film shown was Frank Film, which while being their best known, is also their earliest. It was my first time seeing it (I’m ashamed to say, sort of), and was blown away by the wealth of visuals there were to keep track of. After that, Frank discussed his film experiments in the mid to late 1970’s.

Frank showed a film called Coney, which of course refers to Coney Island. The film is a work of pixilation (animating in real-life). The stand outs of the film are the camera tricks Frank produces as the images race around the sites of Coney Island. I was taken in by the film’s score, as it seemed that parts of the film were cut to match it, particularly a scene where the soundtrack gets very bass-like and heavy sounding, and the image turns to that of a heavy-set woman on the beach. That got a particularly noticeable laugh. After that film, Frank showed Screen Test, a group of random interviews with a troupe of drag performers Frank happened to know. These were interviews only in audio. The speaker was always shown either posing for or being manipulated by Frank’s camera.

We got back to animation with Frankly Caroline (1998). The film is similar to Frank Film in a lot of ways, but what primarily defines it is Caroline Mouris’ narration, with Frank’s humorous interruptions. Something else that defines this film is whereas Frank Film is visuals set to a narration, Frankly Caroline is a narration set to visuals. I was much more familiar with this film than everything else. And wrapping up the show was a collection of the Mouris’ commissioned work. I couldn’t define most of the pieces, as they seemed to link together pretty seamlessly. The one that stood out to me (with little surprise) was their music video for Toad the Wet Sprocket’s “Good Intentions,” which is a pleasant piece that probably wasn’t shown enough on MTV.

I have to admit, before this night, I was unfamiliar with the majority of the Mouris’ work. In fact, I was largely unfamiliar with Frank Film. The most I had seen was Frankly Caroline in a class. I remembered their style based on that. To see the rest of their collage-style work makes me wonder just how many subjects Frank is thinking in a single minute. A single minute of any one of their films is full of too many objects to keep track of. It’s inspiring to see such a daunting task of a style done so fluidly, and with so much information maintained. I wonder if there’s any connection between how they approach their films, and dog-breeding.

It feels like a nice way to end this past season of ASIFA-East, as everyone heads out with some last minute inspiration from Frank and Caroline’s films.